In her office at Boulder High School, the assistant principal has a large cardboard box where she can toss the spoils of her ongoing battle with the newest student addiction.

“This is what I call the box of death,” said Kristen Lewis. “This is everything that we’ve confiscated.”

The box is filled with vape pens like Juuls, the leading brand of e-cigarettes, dozens of disposable pods for nicotine liquid, and even a lonely box of Marlboros.

At Boulder High, students are prohibited from smoking cigarettes or vaping electronic cigarettes anywhere on school grounds. But Lewis and other school employees still regularly pluck e-cigarettes from students’ hands or find the used pods scattered all around.

In the school parking lot, Lewis spotted some discarded packaging and picked it up: “This one is an Orion vape device, it looks like.” A little further on, she spotted a pile of vaping waste: “Yep, more Juul pods.” She finds them even farther out: along the edge of nearby Boulder Creek, and in the yards of homes across from the school.

The extent of the trash reveals “how much this has become a part of our students’ lives,” Lewis said. “And that’s what’s scary. … It really has become an epidemic in our schools, and not just here at Boulder High, but every high school in the nation is really dealing with this.”

Colorado topped the list for teen vaping in 2018, and Boulder is one of the hot spots. The surge in vaping has led to health problems, including an outbreak of very serious and sometimes fatal lung disease. Vaping also has created a less discussed new environmental problem in discarded pens and the abundant pods that come with them.

The disposable pod is a small plastic cartridge that holds the nicotine liquid. It snaps onto the base smoking device, often called a “vape pen,” which can look like an actual pen or an innocuous digital accessory such as a flash drive. In 2017, people bought more than 16 million of the devices in the U.S., a figure that doesn’t include the disposable pods, which in the case of Juul are often sold in packs of four.

Where old cartridges and sleek battery-laden devices go after they’re used is becoming a huge problem for waste managers — and school administrators. 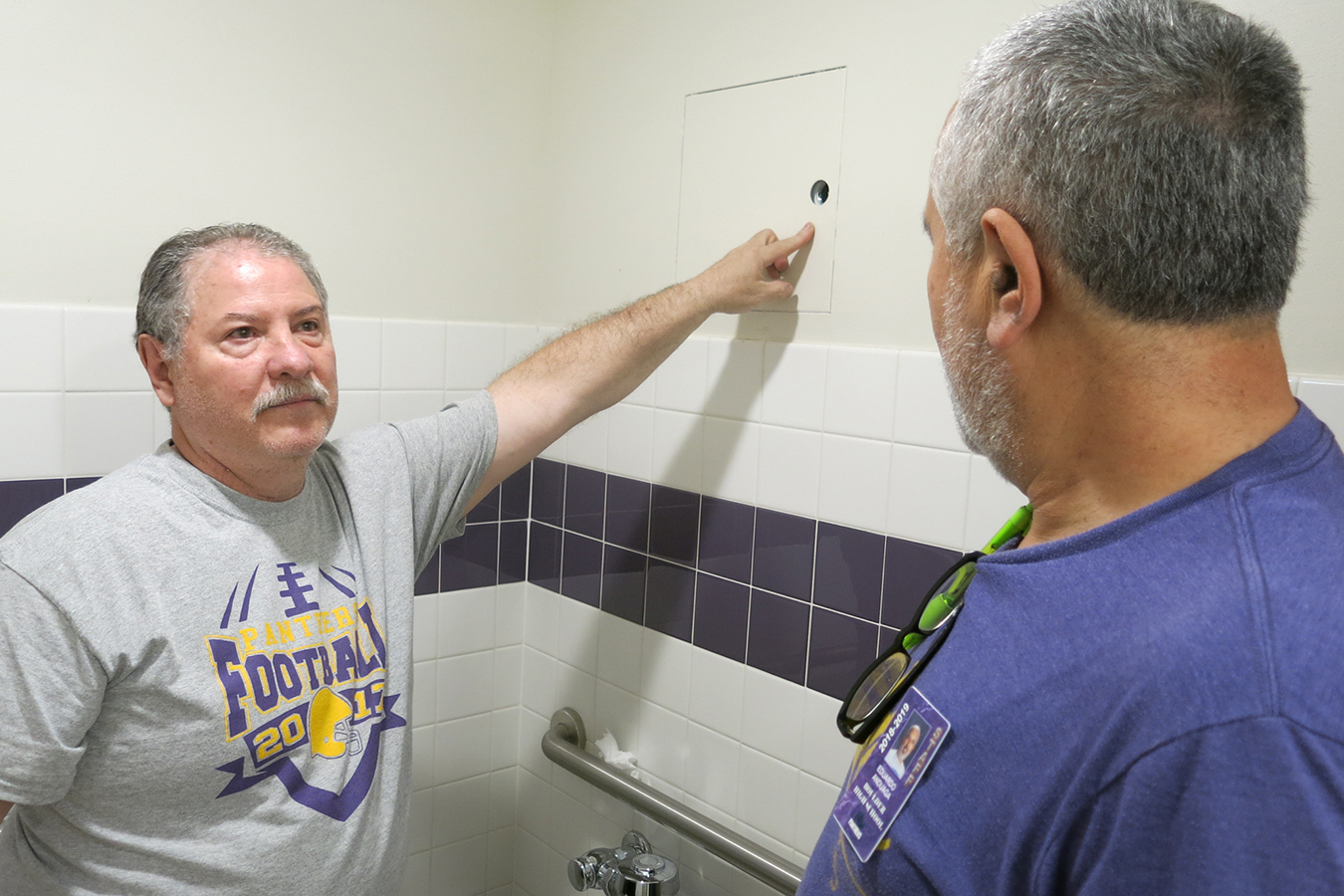 Boulder High custodian Allen Chavez shows a hole in the wall in a boys’ bathroom where students deposit finished pods. He said he finds pods thrown away all over the school, including in between furniture cushions.(John Daley/Colorado Public Radio)

In Boulder, the community is responding to the onslaught of waste. Boulder’s schools and its health and waste management departments teamed up to create a website about e-cigarettes and vaping that includes information on safe disposal. In November, Boulder voters approved a 40% tax on all electronic smoking devices, including vape pens and the disposable pods.

During a walk around Boulder High, custodian Allen Chavez pointed out where he finds empty Juul pods. Students stuff them between furniture cushions. “Most of these things that we find mostly are in the cracks of these chairs here,” Chavez said.

In a boys’ bathroom, Chavez pointed to a small hole in the wall, where students deposit finished pods.

“I’ve caught a couple of guys,” said Chavez, but students will often say, “‘It wasn’t me.'”

Angel Ocon played football at Boulder High and said he’s seen plenty of discarded pods under the bleachers of the school stadium. “If you use vapor or Juul or something, all you’re going to think about is, like, getting the buzz, not where you’re going to throw away your stuff,” Ocon said.

Shelly Fuller, who manages Boulder County’s hazardous materials program, said none of the components should be tossed in the trash.

Instead, vapers should bring them to a hazardous waste or recycling center like hers.

At a battery sorting table, Fuller showed off a bucket of e-cigarette items. This new tributary to the waste stream appeared about two years ago, she said. People were dropping off vaporizers, pods and batteries, but the items were also showing up in the trash.

“If you’re coming in to drop off paint or household chemicals or anything like that, you might also bring in your vaping devices,” Fuller said.

One time, a parent came by to discard a box full of refillable plastic containers for vaping liquids, found in a child’s room. The parent told Fuller: “I just want to get this out of my house. I don’t want them to have access to this.”

As waste products, the different components of the e-cigarettes must be dealt with separately. Vaping devices have batteries, usually lithium-ion. Fuller ships them to a recycling facility in Arizona. The e-liquid pods, on the other hand, she sends to a facility in eastern Colorado. Those pods can contain trace amounts of leftover concentrated nicotine, so they must be disposed of very carefully.

“We’re shipping it off with our poisons or toxics,” Fuller said. Nicotine is considered an acute hazardous waste, she said, as small doses can be lethal to a human or small animal. 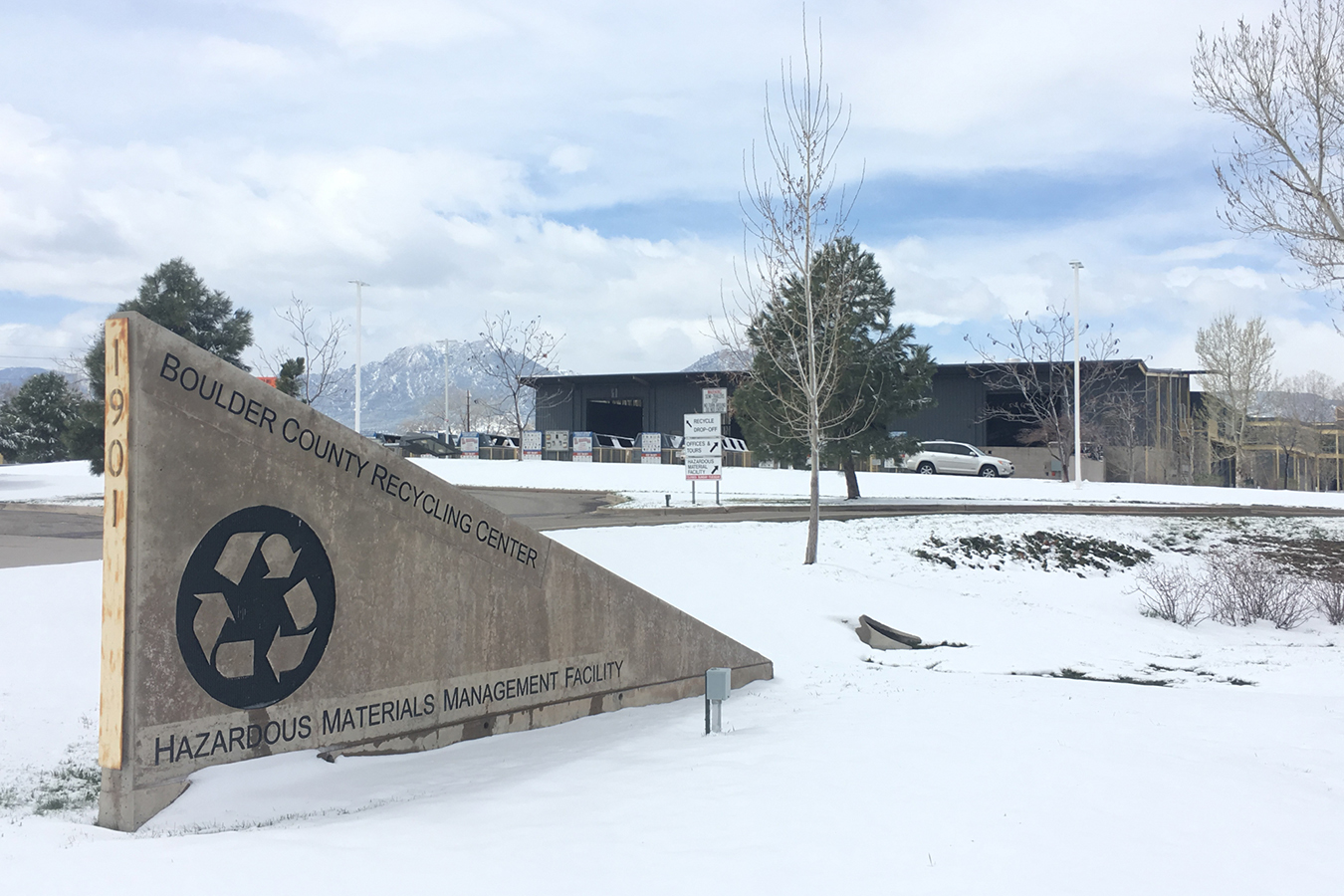 Risks Of Poisoning Or Contamination

A recent study of a dozen high schools in the San Francisco Bay Area found waste from e-cigarettes, tobacco and cannabis products is causing environmental contamination at high schools and in adjacent areas.

At several higher-income high schools, the researchers found “substantial quantities of Juul and Juul-compatible e-cigarette waste,” the vast majority coming from “flavored pods other than tobacco flavor.” At lower-income schools, the researchers found a different mix of waste items, including remnants of small flavored cigars and cigarillos. At all the high schools, they reported finding large quantities of cigarette butts, particularly from menthol cigarettes; they also found flavored cannabis waste.

Discarded or neglected vaping items have led to accidental nicotine poisoning: The Rocky Mountain Poison and Drug Center reported almost 250 such calls from 2013 to 2018 — of which more than half involved children younger than 5.

Brittany Carpenter, a Boulder County tobacco education specialist, said the candylike e-liquid flavors are attractive to kids and pets.”It may be sitting out on a coffee table and there’s access to that, and then either it spills or they open it and then it’s being absorbed through the skin,” she said. “So it’s being ingested or absorbed some way.”

An incidence of nicotine poisoning might require a doctor’s visit or even a trip to the hospital. One Juul pod contains nicotine equivalent to 20 cigarettes, about the same as a pack of cigarettes. Carpenter said research has just begun to determine the exact ingredients of the e-cigarette liquid inside a pod, but besides the nicotine, “there’s some heavy metals including lead, tin and nickel.”

All the toxic things in an e-cigarette can end up in the ground or water if they’re not properly disposed of, said John Volckens, an environmental health researcher at Colorado State University. “As the battery degrades, the compounds in the battery can leach into water nearby,” he said. 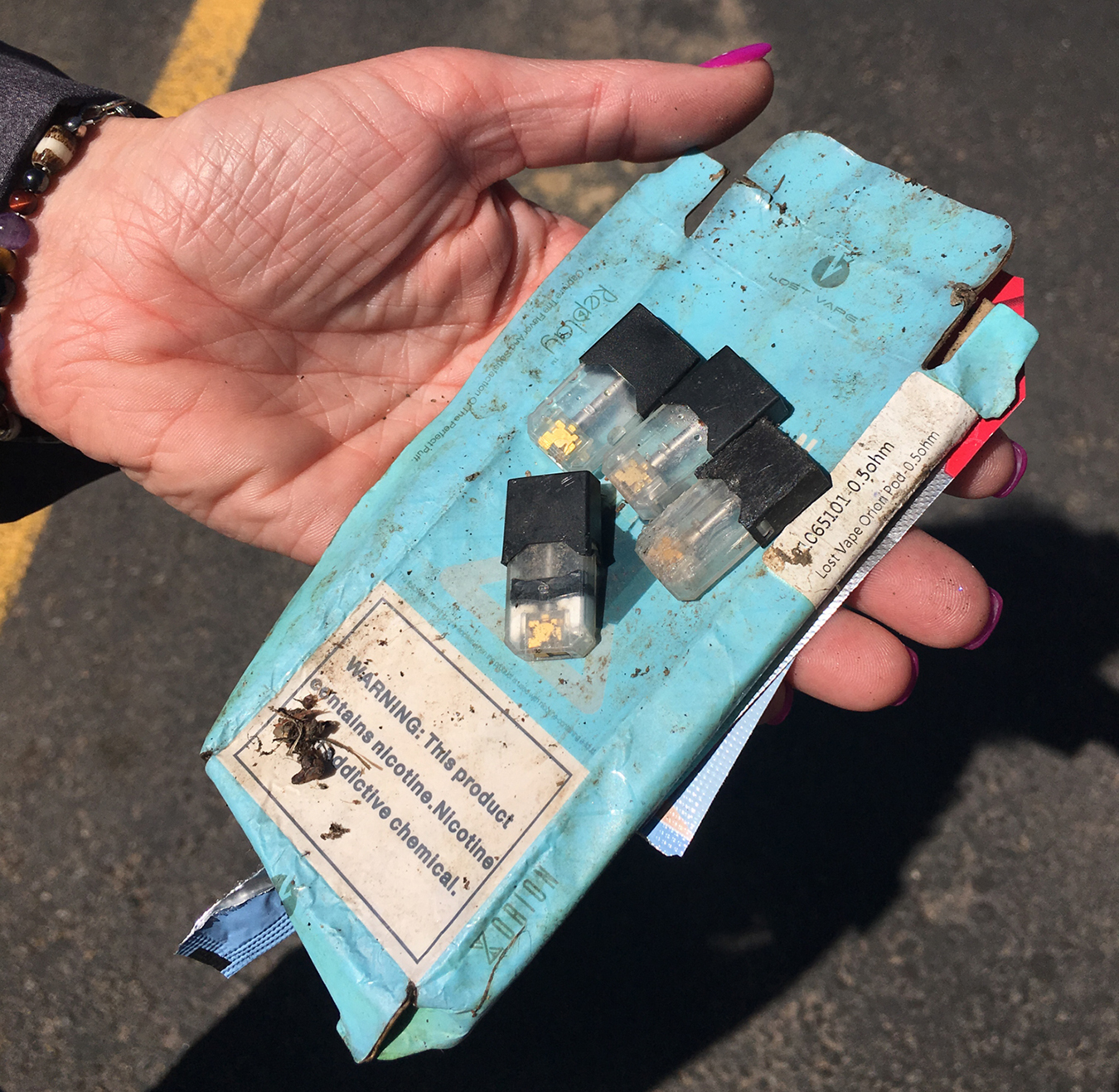 E-cigarette packaging and JUUL pods are easy to find in the parking lot at Boulder High School.(John Daley/Colorado Public Radio)

Like a lot of products, a discarded e-cigarette or pod doesn’t really go away, Volckens said — it just goes somewhere else.

“This is really a contributor to a larger e-waste problem we have as a society,” he said. Yet the vaping industry has failed to launch a broad push to encourage recycling of its products, including pods, Volckens said.

Some vaping proponents dismiss the environmental concerns as overblown.

“There is no environmental damage, compared to all of the household products that we throw out in the garbage every day,” said Gregory Conley, president of the American Vaping Association. “Most pods, by the time someone wants to recklessly throw them on the ground, they’ve been vaped, and there’s little to no liquid left in that pod.” He added that it’s really up to consumers to take care of their waste.

Juul, the market leader, declined interview requests. Its website states that Juul pods are not meant to be refilled and can be thrown away, which is contrary to what Boulder County advises. The website recommends that the battery-powered base devices should be disposed of in the same manner as other electronics, like cellphones.

“This is a whole new thing that, really, I don’t think many people have even given any thought to,” said Stephanie Faren, director of health services for the Boulder Valley School District.

Don’t Toss That E-Cig: Vaping Waste Is A Whole New Headache For Schools And Cities