Rinsing chicken or turkey before cooking it is an ingrained step for many home cooks — passed down through generations and reinforced by cookbooks. Recipes like the “Perfect Roast Chicken” in 1999’s “The Barefoot Contessa Cookbook” advise cooks to “Rinse the chicken inside and out.” But that doesn’t reflect the science.

To wash or not to wash? That’s a question home cooks ask experts at the USDA Meat and Poultry hotline a lot around the holidays.

Or they don’t ask — and end up dispersing food pathogens all over their kitchens, increasing the very risk of foodborne illness they are trying to avoid.

Consumers should rinse their fresh fruits and vegetables with cold water, but not raw poultry, meat or eggs, according to the experts.

For decades, the Department of Agriculture has been advising against washing raw poultry and meat.

“People are still shocked when we tell them” not to wash poultry, said Marianne Gravely, one of USDA’s food safety educators. “Back in the early ’90s we were saying that.”

According to the Centers for Disease Control and Prevention, foodborne pathogens sicken an estimated 48 million Americans every year, putting 128,000 in the hospital and killing 3,000.

“That washing process can really only increase risk,” he said. “All I really can do is control it through cooking.”

Cooking is the only way to kill pathogens like salmonella and campylobacter. Consumers should use a food thermometer to ensure meat and poultry reach a safe minimal temperature: 165 degrees for poultry; 160 degrees for ground meats; 145 degrees for steaks, chops, roasts, fresh or smoked ham, fish and shellfish.

Don’t rely on your cookbook for temperature settings. A 2017 study co-authored by Chapman found that of nearly 1,500 recipes in New York Times Bestseller cookbooks, only 8 percent included an endpoint temperature and a third of those gave an incorrect one based on USDA guidelines.

Keeping raw meat and poultry separate from fresh produce in your grocery bag, in your refrigerator and during food preparation also minimizes cross-contamination.

Food safety experts recommend washing anything used in food preparation including counters, cutting boards and utensils in hot, soapy water. And washing your hands properly — with soap for 20 seconds — before and after preparing food “can really prevent the contamination of other things,” Gravely said.

Chapman and his colleagues at NC State are collaborating with the USDA and RTI International, a nonprofit research institute, to investigate how pathogens are transferred around kitchens. Preliminary results from the first of a multiyear study showed that participants spread bacteria from raw meat to spice containers, refrigerator handles and even salads.

Shelley Feist, executive director of the Partnership for Food Safety Education, said her organization plans to work with cookbook writers and editors to incorporate more guidance for safe food handling. 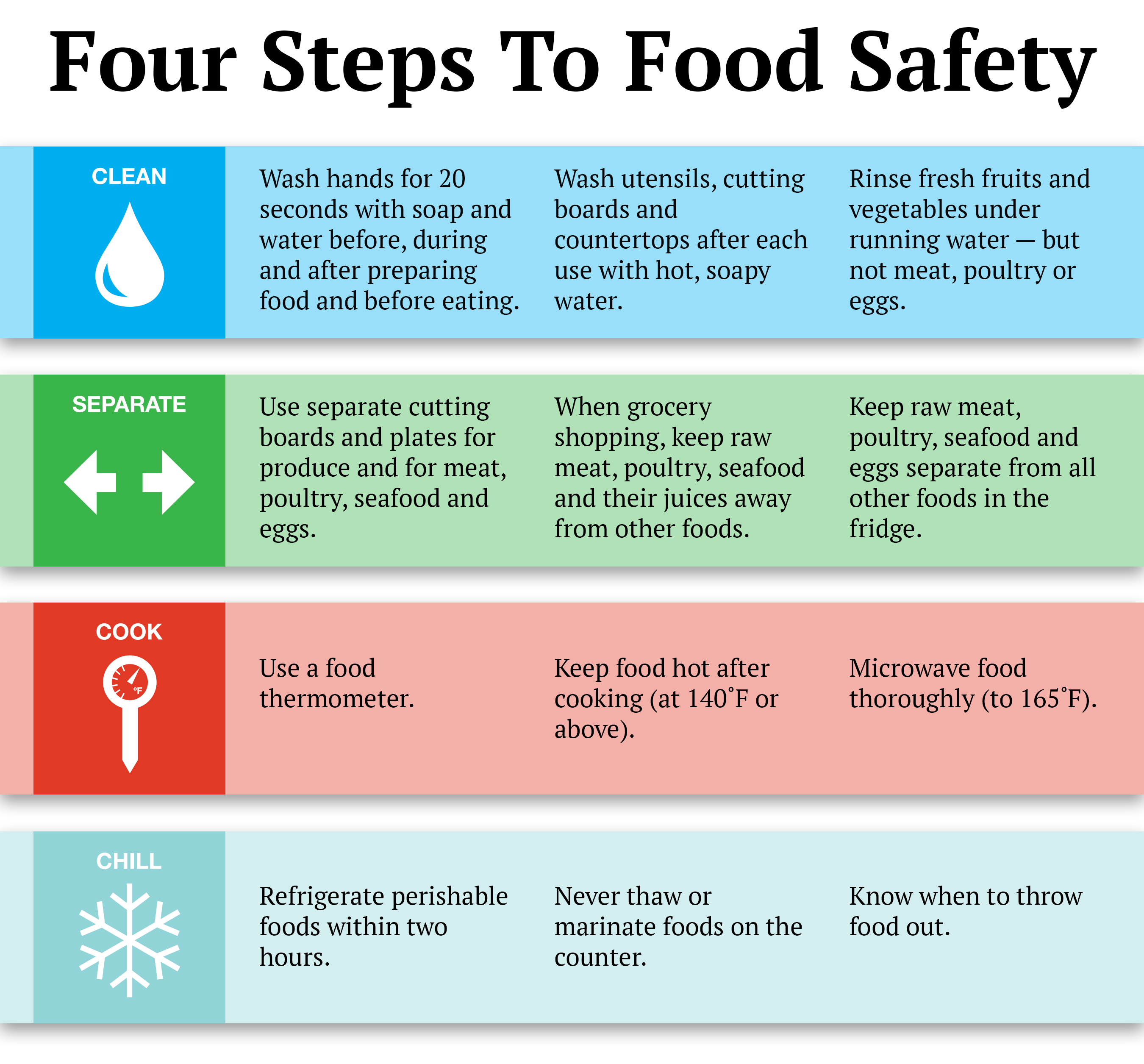 “Pathogens are just so small and the surface of produce is so creviced,” Chapman said, “that the pathogens do a really good job attaching and hiding where water can’t even get to.”

Some produce, such as bagged lettuce and spinach, is clearly labeled as already washed and does not need to be washed again, the FDA says. Washing those vegetables or fruits again won’t reduce the number of pathogens any further and could spread bacteria around the kitchen.

The FDA advises consumers to avoid detergents or soaps when washing food because they can leave behind a residue and can affect taste. There are no FDA-approved food cleaners on the market, and the agency hasn’t found anything to be more effective at removing bacteria than cold running water.

“There are a lot of myths out there that if I wash, I can wash the pathogens off,” Chapman said. “You can wash a little bit off, but not enough to significantly reduce your risk.”

Because consumers eat a lot of fruits and vegetables raw, the risk of contracting a foodborne illness from contaminated lettuce or cantaloupe is greater than from properly cooked chicken.

“With meat and poultry, there is a kill step, but it’s cooking — it isn’t rinsing,” said Feist. “With raw fresh produce, there’s always going to be some risk. You can’t wash it away.”