When it comes to making changes in the nation’s health care system, states will need “time and flexibility,” according to Vermont Gov. Jim Douglas, the Republican head of the National Governors Association. He has been conferring with federal officials on possible reforms.

“RX For Health Reform” from the National Governors Association 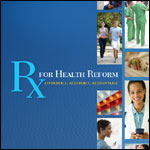 In the context of the current health system overhaul, he said, governors are most concerned with the prospect of a major expansion of Medicaid, which would pose a “tremendous financial liability” to states. Reforms to the state-administered program can only be accomplished “in partnership” with the federal government, which shares the costs of Medicaid with the states, he added.

With that in mind, Douglas said governors need more details about the various proposals to determine the actual impact they would have on their states. Regarding the overhaul proposal released Wednesday by Senate Finance Committee Chairman Max Baucus, D-Mont., Douglas said the parts of the measure that deal with insurance reforms and exchanges “still need work,” but that overall the bill is “headed down a path that seems workable.”

He also warned that, although reform is “critical for the stretched budgets of state governments,” legislation that fails to respect these fiscal realities will force states to further eat into other vital programs, such as education. “Unlike the federal government,” he said, “states can’t print money. We have to balance our books.” Reform efforts, he added, also need “to respect that no one size fits all at the state level.”

Douglas appeared Thursday at the National Press Club in Washington, D.C., at an event launching a year-long initiative (.pdf) to help governors reduce health care costs and expand coverage. He said he has talked with House leadership and several senators on the Finance Committee’s “Gang of Six” who have been negotiating on a health reform proposal.

During his talk, Douglas said his “greatest concern” is that the Washington health reform discourse is too focused on the current payment structure, which he says is the “wrong end” of the problem. “No matter who pays, healthcare costs are on track to bankrupt the country.”

The focus should be on improvements to the healthcare delivery system. “True reform really needs to get at the cost drivers,” he said.