WASHINGTON — Chanting “ACA is here to stay,” and accompanied by a trumpet and drums, about 100 supporters of the 2010 health law rallied outside the Supreme Court Monday morning, as attorneys prepared for three days of oral arguments in the most anticipated high court hearing in years. 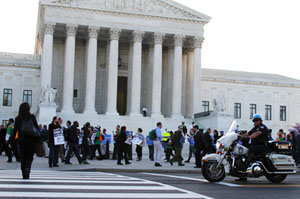 Fewer than 20 health law opponents also demonstrated, including a handful of tea party activists and anti-abortion demonstrators who wore tape over their mouths.  One of them, Ken Campbell, of Lincoln, Calif., said he wanted the federal government to turn Medicare, the social insurance program for the elderly and disabled, over to the states. “Government should be closer to the people,” he said.

But most had come to watch history being made.  About 150 people, some of whom had camped outdoors since early Friday, waited in line, hoping to secure seats for the 90-minute hearing.  In addition to 40 public seats, the court has set aside space for people to cycle through the courtroom for three minutes at a time.  Near the end was Meg Smith, 21, a student from Hastings College in Nebraska, who is in Washington to attend a church conference. “It’s a moral issue for me,” she said, adding that all Americans have a right to health coverage.  She said the law would enable her to stay on her parents’ policy when she graduates from college.

Kathie McClure, 57, an Atlanta trial attorney, had been waiting outside the court since Friday afternoon. She decided to skip today’s hearing so she could get inside Tuesday when the judges discuss the individual mandate. She said she came because her son, 27,  has diabetes and her daughter, 29,  has epilepsy, and the law would ensure they could always get health coverage despite having pre-existing conditions.  “Many opponents of the law don’t have an understanding of what it’s like to have something wrong with you,” she said as she huddled under a pink blanket.

Asked how she felt watching people whom she had waited with go inside the court, she said: “Cold.” Temperatures Monday night are forecast to be near freezing

Richard Marcus, 60, of Lincoln, Calif., in Washington to visit his two children, also hoped to get a peek inside. “I thought this would be a fun way of spending the day,” he said.

Marcus said he has mixed feeling about the law. “Every other government has successfully used national health care, and if done correctly, it may work.”

Several pediatric residents from nearby Children’s National Medical Center were there in white coats, speaking in favor of the law on behalf of the American Academy of Pediatrics. Dr. Jacob Edwards, 34, a third-year resident, said he wanted to show that doctors support the law, although he acknowledged many are fearful of it. “This law will do so much to help children with pre-existing conditions,” he said.

The consumer advocacy group, Families USA,  also invited several patients and physicians to speak in favor of the law. 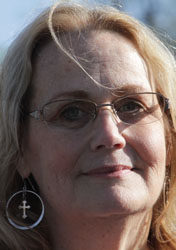 Marlys Cox, 57, of St. Petersburg, Fla., said she has benefited from the law’s new high-risk insurance pools, which were created to help people with pre-existing conditions gain health coverage before state insurance marketplaces begin operating in 2014. “I came here to speak for the people who can’t be here themselves, who are benefitting from the law,” she said.

Cox, who could not find affordable insurance because of her hepatitis C, said the new pools have been a life-saver for her. While she waited six months to become eligible, she was diagnosed with breast cancer and had to delay some treatment. Under her new coverage, she was able to get surgery and radiation and to see an oncologist. “I’ve been lucky,” she said.