A magazine ad for the testosterone drug AndroGel shows a discount card that allows consumers to pay “as little as $10 per month” for the medicine. Drugmaker GlaxoSmithKline announces in another magazine that it offers discount coupons for the popular inhaler Advair. And a TV commercial for Nexium notes that if consumers can’t afford the heartburn drug, its manufacturer, AstraZeneca, “may be able to help.” 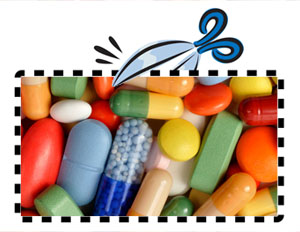 In the past few years, coupons and discount cards have become nearly ubiquitous for prescription drugs. Such incentives are available for 395 medications, according to a recent report from industry consultant IMS Health. In a similar analysis in 2009, a marketing firm found that only 86 drugs came with coupons.

Drugmakers say the coupons help Americans get the medicine they need. But the insurance industry is concerned that they drive patients toward more expensive brand-name drugs, leaving insurers to cover the full cost, which then gets passed on to consumers in the form of higher premiums.

“An individual patient who receives a coupon might not realize that, although that particular prescription may cost less that month, overall what it does is to raise costs for everyone, including themselves,” said Susan Pisano, a spokeswoman for the industry trade group America’s Health Insurance Plans.

For people using Medicare, Medicaid, veterans benefits or any other federal health insurance program, using a coupon or a discount card to buy prescription medication works against efforts to keep federal spending down and may also be counter to federal law, according to some experts’ interpretation.

Prescription drug coupons represent the latest battle in an escalating war between health insurers and the pharmaceutical industry.

Insurers set high co-pays for brand-name drugs to steer their members to less-expensive generics. In response, companies such as Merck, AstraZeneca, Pfizer and many others issue coupons or discount cards that cover that co-pay.

A recent article in the Journal of the American Medical Association outlined the dramatic effect coupons can have on prices paid by consumers. Using cholesterol-lowering drugs as an example, researchers found that the popular statin Lipitor comes with an average co-pay of $30 a month, compared with a $10-a-month co-pay for simvastatin, a generic drug also used to treat high cholesterol. But with a coupon from Pfizer, the drug’s manufacturer, the co-pay for Lipitor goes down to $4 a month, making it less expensive for the consumer than simvastatin.

It’s a great deal for the patient, but not the insurer. According to the JAMA article, the insurer pays $18 a month for simvastatin and $137 a month for Lipitor.

The coupons are “designed to get patients to bang down their doctor’s door and say, ‘Give me the most expensive drug,’ ” said Mark Merritt, president of the Pharmaceutical Care Management Association. Merritt’s trade group represents companies that manage prescription benefit plans for private insurance companies and firms that participate in Part D, Medicare’s drug program.

Merritt said that, since insurers ultimately end up footing the bill for the more expensive brand-name drug, they may respond by increasing premiums on everyone.

The rising cost of brand-name drugs is one of the many factors driving up the cost of health care. President Barack Obama addressed the issue at a White House news conference in 2009 during the debate over his health-care bill. When asked if Americans would have to make sacrifices to make the overhaul work, he said, “They’re going to have to give up paying for things that don’t make them healthier. . . . If there’s a blue pill and a red pill, and the blue pill is half the price of the red pill and works just as well, why not pay half price for the thing that’s going to make you well?”

Drugmakers argue the coupons save money by preventing health problems that occur when patients cannot afford prescribed medications. A 2008 study in JAMA found that 20 percent of Medicare beneficiaries in fair to poor health did not take their medicine as directed because of cost concerns.

“By reducing patient cost sharing, co-pay coupons can support patients’ adherence to a treatment regimen,” Matthew Bennett, vice president of the trade group PhRMA, said in a statement. “[They] can play a valuable role in generating better health outcomes and reducing the use of avoidable and costly medical care.”

The coupon war is now being fought in state legislatures and in court. Earlier this year, several union health plans filed a class-action lawsuit against drug manufacturers over coupons. They’re asking a judge to find the use of coupons illegal and for monetary damages. In July, Massachusetts legalized prescription coupons. It had been the only state to ban them.

The cost issue surrounding coupons is made even more complicated when the federal government is the insurer.

According to federal statutes, it is a crime to provide “any remuneration to induce or reward referrals reimbursable by a federal health care program.” Some experts say coupons constitute such remuneration because they encourage consumers to purchase a more expensive product, with the extra cost ultimately falling on taxpayers. A 2010 report from the Congressional Budget Office found that Medicare pays an additional $76 every time a senior chooses a brand-name drug over a generic.

Even officials within the pharmaceutical and insurance industries said coupons should not be used by beneficiaries of government health programs. “The use of co-pay coupons is prohibited in the Medicare Part D program and pharmacies,” Bennett said, “and coupon-processing vendors have safeguards in place to prevent unauthorized use.”

But others say the coupons’ status is not resolved.

According to Donald White, a spokesman for the Department of Health and Human Services, no court or administrative body has ever ruled that coupons are illegal. HHS has never prosecuted anyone for issuing or using coupons in the federal health programs.

A survey of 1,000 seniors enrolled in Medicare Part D — commissioned by the National Coalition on Health Care this spring — found that 6 percent of Medicare beneficiaries are using the coupons.

“I can’t blame a senior” for doing so, said Larry McNeely, manager of policy communications at the coalition, which is comprised of unions, businesses and others seeking to reduce health-care spending and expand coverage to the uninsured. “[But] these aren’t put out there for anyone’s health. They’re there to cripple competition from generics.”

“No one has an incentive to do the right thing,” he said. “The doctor has no incentive to not give out coupons to seniors. If the pharmacist says no, it will be pretty easy for a senior to go to the next pharmacist down the street. And the seniors don’t have much incentive.”

Of course, coupons wouldn’t be so attractive if the co-pays that insurers set weren’t so high. Merritt acknowledges this but said coupons are an inefficient way to make prescription medications more affordable for the people who need help the most.

“These coupons target only those who already have drug benefits. They don’t help the uninsured,” he said, since they cover only a small portion of the drug’s total cost. “[Right now], these are available to Bill Gates as well as to someone who makes $25,000 a year.”

Drug Coupons: A Good Deal For The Patient, But Not The Insurer