Envelopes in his left hand held $750 checks to help patients with a rare disease cover the cost of a whirlwind trip to the nation’s capital. The money was donated by the pharmaceutical industry.

“Obviously, we wanted to send as many patients to advocate on Capitol Hill as possible,” said Yale, the director of the International Pemphigus & Pemphigoid Foundation.

Yale collected $7,500 in donations from a specialty pharmacy and a drugmaker that manufactures treatments for the rare diseases that afflict his members. The money was intended to help offset patients’ travel expenses.

The pemphigus/pemphigoid group, representing people with a rare autoimmune disease that often affects the skin and mucus membranes, was just one of many small patient advocacy organizations represented at the late February conference, where sick patients and family members learn how to lobby and test their new skills. Rare diseases in the U.S. are defined as those affecting fewer than 200,000 people.

The pharmaceutical industry is teaming up with advocacy groups that are training and even paying for patients who need their medicines to promote their causes in Washington.

National polls identify high drug prices as Americans’ No. 1 health care complaint, and President Donald Trump has declared that pharmaceutical companies are “getting away with murder.”

But these behind-the-scenes partnerships between the pharmaceutical industry and advocacy groups may work against lowering the price of high-price drugs. Critics say vulnerable patients are being manipulated and the goals promoted are skewed by the pharma benefactors who want faster government approval for new products and to get insurers or government programs to pay for them, whatever the price tag.

Dr. Ezekiel Emanuel, a bioethicist who has studied the issue, said he questions whether patient advocacy groups truly are “white knights defending the good fight.” He said research suggests that the conflicts of interest that occur when drug companies train and finance patient groups are “pretty rampant.” Emanuel co-authored a March study that found 83 percent of the 104 largest patient advocacy groups take money from the drug, medical device and biotech industries. Smaller organizations are even more likely to be disproportionately dependent on industry funding for their operating budgets, he said.

Among repeat attendees at this year’s conference were 17-year-olds Shira Strongin and Emily Muller, who both suffer from a debilitating connective tissue disease known as Ehlers-Danlos Syndromes.

Strongin said the “patient voice” has helped pass laws, such as the 21st Century Cures Act that patients lobbied Congress for the previous year. 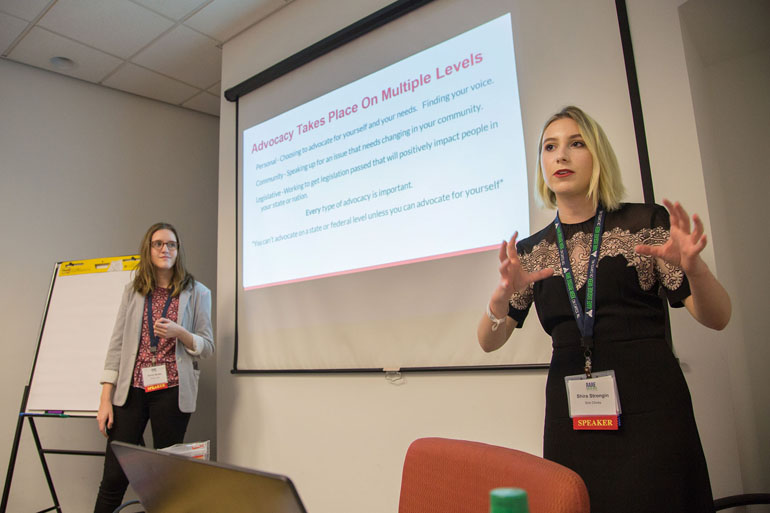 Muller and Strongin give their presentation on advocacy at the Rare Disease Legislative Advocates conference. (H. Darr Beiser for KHN)

But some conference first-timers were skeptical about the motivations: “What I’m seeing just doesn’t feel right,” said Aaron Motschenbacher, who participated because his three young children suffer from deadly and progressive multiple sulfatase deficiency, a rare hereditary metabolic disorder.

Before paying his own way to take an early flight home, he complained that patients and their families had no “involvement drafting, creating or discussing” the messaging delivered to Congress, adding: “It’s like marketing, I’m pushing an agenda by and through a sob story.”

The patient-lobbying conference, organized by the EveryLife Foundation for Rare Diseases, underlines how the financial interests of manufacturers and the medical needs of patients are intertwined.

More than 300 patients and advocates attended, and nearly all took part in a subsequent “Lobby Day” to visit congressional staff and lawmakers. They permitted a reporter from Kaiser Health News to observe and also join in a reception showcasing art by some of the patients.

Many patients were visibly sick or terminally ill. When deployed to pay visits to politicians, they add a human face to lobbying efforts around proposed legislation that affects pharma. Legislation like the Cures Act might increase spending on drug development or grease the pathway of drugs to market and with fewer regulations.

Before going to Capitol Hill, the patients and their families underwent a day of training, learning how to tell their stories. If at a loss for what to talk about, they were provided talking points on what EveryLife staffers called potential “asks.”

The group’s president, Dr. Emil Kakkis, is a drug industry executive. He said the foundation doesn’t “tell patients what to do on the Hill. They are given options.”

During one session called “Tricks of the Trade: Preparing for a Successful Meeting,” Soapbox Consulting chief executive Christopher Kush walked the audience through logistics for the next day.

The attendees were given a mobile app, which shows each advocate’s prearranged meeting list. Checking a map, Kush looked at the audience and said: “If you see a little dot where you live, you may have a new member of Congress — or a green check on your state, that means you have a new senator.”

He asked the audience to raise their hands if they saw dots and checks.

“Oh, here you come,” Kush said. “It’s going to be like an army walking up the hallways [of Congress]. I just got chills.”

For attendees, the meetings do have benefits.

Advocate Janice Ragazzo said EveryLife training and Hill visits taught her how to create a disease registry, grow her disease organization’s outreach and how to talk with regulators. Her goal is to develop federal billing codes that could help track the prevalence of her daughter’s genetic disease.

They also learn from each other: Lisa Douthit, the leader of a different rare disease group, shook her head admiringly as Yale explained his fundraising strategy as he passed out the $750 checks.

“It’s great PR for the pharmaceutical company,” she said.

More than that, perhaps, such events allow parents and patients with rare disease to connect with each other — many are delighted to realize they’re not alone in their suffering.

“I’ve watched kids sometimes who felt so timid and afraid and shy to share their stories learn to embrace it as part of their life,” Muller said. “And I think that’s been the most incredible part for me.” 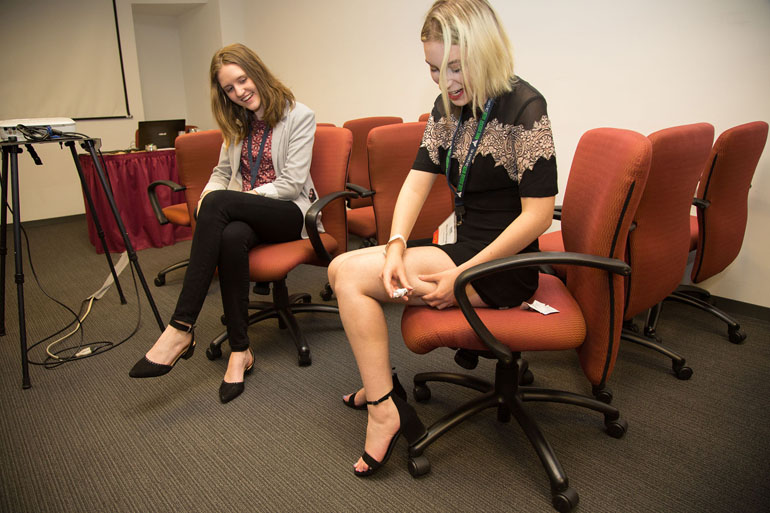 One focus of this year’s conference was the OPEN Act, which provides a financial reward for drugmakers who do clinical trials to repurpose an existing drug to treat a rare disease. A white paper explained the bill to participants and gave tips for what to say on the Hill.

In what appeared to be a coordinated strategy, Rep. Gus Bilirakis (R-Fla.) reintroduced the OPEN (officially the Orphan Product Extensions Now, Accelerating Cures and Treatments) Act on the House floor the week of the conference. Bilirakis has worked with EveryLife on the bill for several years and it had been included in the House version of the Cures Act, though it was dropped from the final law. More than 220 patient organizations have signed on to support it and it has steadily gained co-sponsors, said EveryLife’s Julia Jenkins. Jenkins said the bill is expected to be introduced in the Senate soon.

If approved, it would give drugmakers six months of extra market exclusivity to repurpose a drug in addition to the patents or other exclusivity periods it may already have.

EveryLife wrote in a March Health Affairs blog post that the law would “double the number of treatments available” and generate lower-cost medicines for the rare disease community.

But in a recent journal paper, Harvard’s Dr. Aaron Kesselheim argued that the law offers unnecessary incentives for manufacturers that already have blockbuster drugs.

The EveryLife Foundation’s Rare Giving program covered about 100 travel stipends for conference attendees. While that is largely paid for by the foundation’s board members, including Kakkis, Jenkins said the group is “actively trying to get industry to fund the program.”

Top donors to EveryLife include pharmaceutical companies AbbVie, Alexion, BioMarin, Raptor Pharmaceutical and the Kakkis family, according to the foundation’s most recent annual report. EveryLife reported income of nearly $1.8 million in 2015.

Kakkis, a successful medical researcher, founded Novato, Calif.-based Ultragenyx Pharmaceutical in 2010 to develop more ultra-rare disease drugs. Last year, he earned a base salary of $567,200 with a potential performance-based cash bonus that could equal up to 60 percent of his salary, according to corporate financial filings. 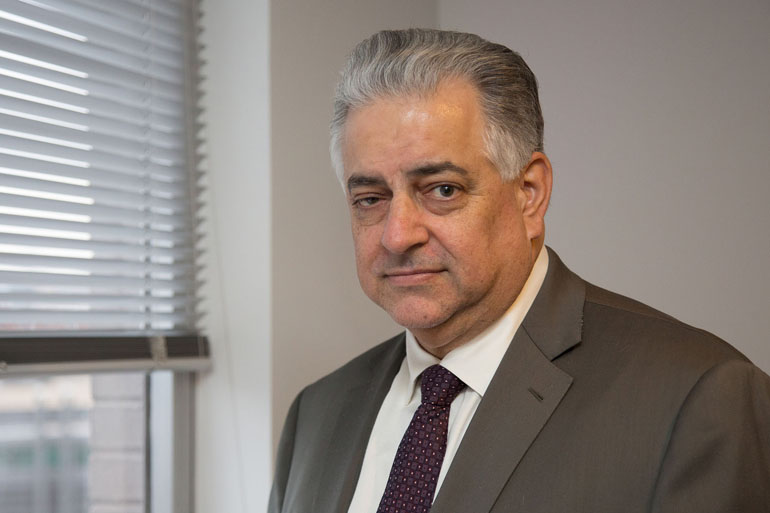 Kakkis is forthright about wearing multiple hats — posting his affiliations openly on his biography page on the Ultragenyx website. With a charming and compelling personality, he is also well-known for his ability to get things done.

Late last year, Kakkis’ foundation — with his army of advocates — lobbied for the Cures Act. One of the patients, Max Schill, was the little boy who stood with congressional leaders as they signed the bill to send to President Barack Obama. Key backers included EveryLife’s legislative caucus for rare diseases, which counts more than 100 House members and five senators among its ranks. Since 2011, Kakkis has individually contributed $48,100 to political committees, including $6,000 to Bilirakis.

Kakkis explained in a June 2010 Senate appropriations subcommittee hearing that he started EveryLife after working through the Food and Drug Administration’s process to win approval for Aldurazyme, an enzyme replacement therapy he developed to treat one form (MPS I) of a group of disorders known as mucopolysaccharidoses.

Eventually the drug was approved, he said, but with a three-year delay. And, during that time, “a number of MPS I patients passed away,” Kakkis said.

In Kakkis’ view, drug companies and patients have a shared interest in getting drugs developed and approved.

“I do think the company’s interest [and patients’ interests] are not misaligned,” he said.

In response to rising conflict-of-interest concerns, the National Health Council, a coalition of patient advocacy groups and other organizations, updated its guidelines in March and now requires member advocacy groups to divulge all contributions from pharmaceutical, biotechnology or device companies that exceed a certain threshold.

“I have no idea what their funding is, we just look at the work they do,” said Austin, director of the National Center for Advancing Translational Sciences.

Speaker Max Bronstein, EveryLife’s chief advocacy and science policy officer, thanked the audience for advocating on behalf of the 21st Century Cures Act and talked about the OPEN Act, saying it is “the legislation we’ve been working on for a few years.”

Austin said he was aware that Kakkis was both the head of EveryLife as well as Ultragenyx.

“You know, Washington is full of those people,” Austin said. “As I’ve learned being here, that’s the way Washington works, for better or worse. It’s a little stinky frankly, but there you are.”