A controversial recommendation last year by the American College of Physicians, which represents the nation’s internists, strongly urged that doctors stop routinely performing the invasive exam on women without symptoms and who are not pregnant. 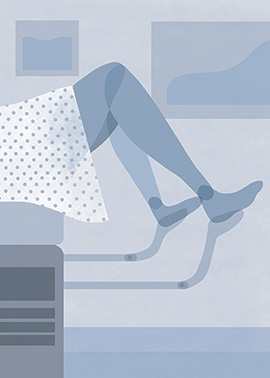 Citing 60 years of research, the ACP found no evidence that the screening, performed about 63 million times annually at a cost of approximately $2.6 billion, detects cancer or other serious conditions. The exam, researchers reported, did cause harm: One-third of women reported discomfort, pain, embarrassment or anxiety — leading some to avoid care altogether. For roughly 1 percent of women, a suspicious finding triggered a cascade of anxiety-provoking interventions — including tests and surgery, which carry a risk of complications for conditions that nearly always turned out to be benign.

The American College of Obstetricians and Gynecologists (ACOG) fired back. Despite what the group acknowledged was a lack of evidence that “supports or refutes” the exam, ACOG strongly endorsed it, citing the “clinical experiences of gynecologists.” Patients expect it, the group said, and the screening builds trust, reassures women and encourages them to discuss sensitive matters such as sexual dysfunction. A decision about whether to undergo the exam should be made by doctors and patients, ACOG concluded.

These dueling recommendations leave women in the unenviable position of sorting out what to do.

The uncertainty echoes the ongoing debate about whether women need mammograms annually or every two years. The decision about the pelvic exam may get easier in the coming months, if the U.S. Preventive Services Task Force, which is weighing the evidence, makes a recommendation. The recommendations from the task force, a volunteer advisory group of medical experts, help govern what is covered without a co-pay under the Affordable Care Act. A yearly “well-woman” visit, which may include a pelvic exam, is among the services covered under the health law.

The debate over the pelvic exam exemplifies the thorny process of distinguishing effective care from that deemed by some experts to be “low-value,” an issue facing all specialties as medicine becomes increasingly evidence-based. The controversy also underscores the difficulty of changing long-established clinical practice and raises questions about the role of reimbursement in shaping physician behavior.

“This is about what you believe might be helpful,” said Judy Norsigian, former executive director of the Boston Women’s Health Collective and a co-author of “Our Bodies Ourselves,” the groundbreaking feminist health book first published by the group in 1970. “Everyone brings into this decision their values and concerns about the medical system,” and must weigh the risk of overtreatment against the failure to detect something important. “The question is: Which risk do you want to take? Women have very different views on this.”

To George Sawaya, a professor of obstetrics and gynecology and epidemiology and biostatistics at the University of California at San Francisco School of Medicine, “The question is: What should we be doing in that well-woman visit?” He regards the routine exam as “more of a ritual than an evidence-based practice.” A 2013 study he co-authored found that many gynecologists erroneously believe the exam effectively screens for ovarian cancer. It doesn’t; in fact, no effective screening method exists. And Sawaya’s team found that among the reasons doctors do pelvic exams is to “ensure adequate compensation” for routine gynecological care and because patients expect it.

But Barbara Levy, ACOG’s vice president for policy, said that clinical, not financial, concerns are the driving force. Gynecologists, Levy said, are “trying to provide the best service for patients that we can.” In Levy’s view, the ACP guidelines are misguided. “A lack of evidence does not equal lack of benefit,” she said.

Until recently, the annual pelvic exam, performed along with a Pap smear, a test that analyzes cells to screen for cervical cancer, was sacrosanct. But in 2009, the Pap recommendation was revised, after studies showed that most healthy women between 21 and 65 could wait three to five years after a normal Pap test before having another. After 65, most could stop getting a Pap test altogether.

The pelvic exam is performed on a woman who lies on a table naked from the waist down with her feet in stirrups. The doctor inserts two gloved fingers into the vagina, pressing on the lower abdomen with the other hand to check the size and position of the ovaries and uterus. A Pap test, performed during a pelvic exam, involves collecting a small number of cells from the cervix, the lower part of the uterus, that are analyzed in a lab for cancer or precancerous changes.

Some gynecologists say the increased interval between Pap tests has unsettled some patients. And the pelvic exam controversy has added to the confusion.

“My experience is that patients are taken aback when told they don’t have to have a pelvic exam,” said Tamika Auguste, an OB-GYN at Washington Hospital Center. “They ask, ‘Why am I here?’ For women coming to the gynecologist it is expected.”

Auguste, chair of the D.C. chapter of ACOG and an associate professor at the Georgetown University School of Medicine, tells her patients that she recommends an annual exam “to make sure things look okay on the outside and feel okay on the inside.” Not one of them, she said, has opted out.

Urogynecologist Jill Rabin, a professor at Hofstra North Shore-Long Island Jewish School of Medicine in New York, said she has found conditions that needed prompt treatment, including melanoma, during a routine pelvic exam. “If you’re counting on people waiting to come in with symptoms,” she said, “they’re going to come in late in the game.”

Supporters of routine exams often cite anecdotes in which a routine exam made a difference.

“Stories are very powerful, but they are the antithesis of epidemiological evidence,” Sawaya said. “The focus should be on symptoms, and on how to keep people healthy, not to turn healthy people into patients.”

“Anytime we suggest something to someone in the name of prevention, we have to have a high bar for evidence of benefit,” Sawaya added.

One of the first studies to suggest that routine pelvic exams were unnecessary, even potentially harmful, was published in 2011 by Carolyn Westhoff, a professor of obstetrics and gynecology who directs the division of family planning and preventive services at the Columbia University School of Medicine.

Westhoff’s team compared outcomes research in the United States and in parts of Western Europe, including the United Kingdom, where the exam is performed only on women who have symptoms, and found a huge disparity in hysterectomies, which they linked in part to the use of routine pelvic exams. (The U.S. rate is more than double that of Western European countries, including the United Kingdom.) Pelvic exams, they concluded, are not recommended to screen for ovarian cancer, are not used to detect sexually transmitted infections, are not a prerequisite for many forms of contraception including birth control pills, and are “uncomfortable, disliked by many women . . . use scarce time during a well woman visit” and contribute to high health costs without a corresponding benefit.

In an interview, Westhoff said that doctors routinely find a lot of unimportant conditions and then “start ordering tests or more-frequent exams” or surgery, which carries a risk of complications for things that don’t need treatment. “If a woman is asymptomatic, we should leave well enough alone.”

‘Hard To Stop Doing It’

But, Westhoff noted, the exam inspires fierce loyalty for reasons both cultural and financial. “A pelvic is deeply embedded in what it means to be an OB-GYN. People who go into obstetrics are very action-oriented, very procedure-oriented,” she said. “As a clinician myself, it was hard to stop doing it.” Many gynecologists, she added, are “not going to get paid if [they] don’t do a pelvic” because insurance reimbursement is largely predicated on procedures.

Westhoff said that some of her colleagues, only half in jest, have asked, “Carolyn, are you trying to put us all out of business?” Without the need for an annual pelvic exam or Pap test, some women without symptoms, particularly those who also see an internist or family physician, may skip their annual visit to the gynecologist.

To Cynthia Pearson, executive director of the National Women’s Health Network, a Washington-based advocacy group, the pelvic exam consumes time that could be better spent screening for sexually transmitted diseases or discussing important issues such as blood pressure or diet. “It isn’t an essential part of a well-woman exam,” Pearson said, “nor does it help women stay healthy.”‘

Internist Sandra Adamson Fryhofer, a past president of the American College of Physicians, tells patients the choice is theirs. “For something that’s uncomfortable and anxiety-provoking, it’s only fair for women to know what the evidence shows,” said Fryhofer, who practices in Atlanta. Half of her patients request a pelvic exam, which “takes less time than discussing it.”

“Now that we do cervical cancer screening every three years, we leave [a decision about the pelvic exam] up to the patient, and we certainly want to see them every three years,” said Steven J. Masters, chief of obstetrics and gynecology at Kaiser. Masters said he considers the value of the pelvic exam to be “absolutely nil,” but he performs the exam if a patient requests it. Most of his patients, he said, are “delighted” to skip it. “This isn’t about saving money at all, but about doing things based on outcomes rather than habit.”

But ACOG’s Levy said she believes the pelvic exam can be a bonding experience. “It opens the door and is a time of intimacy between the patient and care provider,” encouraging patients to discuss sexual concerns, urinary incontinence and other issues they might otherwise avoid.

Norsigian of “Our Bodies Ourselves” said it behooves consumers to make an informed choice. “Women should not be bullied by their doctors” into having an exam, but should make the decision that best suits their circumstances, she said. “Medicine is often slow to change, particularly in this field.”