The patient was dying and she knew it. In her mid-50s, she had been battling breast cancer for years, but it had spread to her bones, causing unrelenting pain that required hospitalization. Jeremy Force, a first-year oncology fellow at Duke University Medical Center who had never met the woman, was assigned to stop by her room last November to discuss her decision to enter hospice. 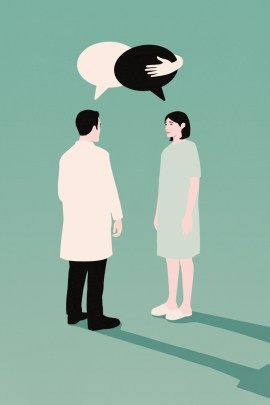 Employing the skills he had just learned in a day-long course, Force sat at the end of her bed and listened intently. The woman wept, telling him she was exhausted and worried about the impact her death would have on her two daughters.

“I acknowledged how hard what she was going through was,” Force said of their 15-minute conversation, “and told her I had two children, too” and that hospice was designed to provide her additional support.

A few days later, he ran into the woman in the hall. “You’re the best physician I’ve ever worked with,” Force remembers her telling him. “I was blown away,” he says. “It was such an honor.”

Force credits “Oncotalk,” a course required of Duke’s oncology fellows, for the unexpected accolade. Developed by medical faculty at Duke, the University of Pittsburgh and several other medical schools, “Oncotalk” is part of a burgeoning effort to teach doctors an essential but often overlooked skill: clinical empathy. Unlike sympathy, which is defined as feeling sorry for another person, clinical empathy is the ability to stand in a patient’s shoes and to convey an understanding of the patient’s situation as well as the desire to help.

Clinical empathy was once dismissively known as “good bedside manner” and traditionally regarded as far less important than technical acumen. But a spate of studies in the past decade has found that it is no mere frill. Increasingly, empathy is considered essential to establishing trust, the foundation of a good doctor-patient relationship.

Studies have linked empathy to greater patient satisfaction, better outcomes, decreased physician burnout and a lower risk of malpractice suits and errors. Beginning this year, the Medical College Admission Test will contain questions involving human behavior and psychology, a recognition that being a good doctor “requires an understanding of people,” not just science, according to the American Association of Medical Colleges. Patient satisfaction scores are now being used to calculate Medicare reimbursement under the Affordable Care Act. And more than 70 percent of hospitals and health networks are using patient satisfaction scores in physician compensation decisions.

While some people are naturally better at being empathic, said Mohammadreza Hojat, a research professor of psychiatry at Jefferson Medical College in Philadelphia, empathy can be taught. “Empathy is a cognitive attribute, not a personality trait,” said Hojat, who developed the Jefferson Scale of Empathy, a tool used by researchers to measure it.

“The pressure is really on,” said psychiatrist Helen Riess. The director of the empathy and relational science program at Massachusetts General Hospital, she designed “Empathetics,” a series of online courses for physicians. “The ACA and accountability for health improvement is really heightening the importance of a relationship” between patients and their doctors when it comes to boosting adherence to treatment and improving health outcomes.

“Demographics and economics are driving this,” said James A. Tulsky, one of the developers of “Oncotalk.” (The original course for oncologists has been adapted for other specialties under the aegis of Vital Talk.) “Baby boomers have higher expectations” and are less willing to tolerate doctors they consider arrogant or unapproachable, added Tulsky, director of the Duke Center for Palliative Care. A 2011 study he headed found that doctors who took the course inspired greater trust in their patients than those who did not.

While empathy courses are rarely required in medical training, interest in them is growing, experts say, and programs are underway at Jefferson Medical College and at Columbia University School of Medicine. Columbia has pioneered a program in narrative medicine, which emphasizes the importance of understanding patients’ life stories in providing compassionate care.

While the curricula differ, most focus on self-monitoring by doctors to reduce defensiveness, improve listening skills (one study found that, on average, doctors interrupt patients within 18 seconds) and decode facial expressions and body language. Some programs use actors as simulated patients and provide feedback to individual doctors.

Too Busy For Empathy

“In the 1980s, when I trained, the emphasis was on medical knowledge and technical skills,” said Debra Weinstein, vice president for graduate medical education at Partners HealthCare, the largest provider of medical services in Massachusetts. But in the past decade, “the profession has been more attuned to patient satisfaction and the connection between satisfaction and outcomes and incentives.”

Partners, which includes Mass General and other Harvard teaching hospitals, is requiring that its 2,000 residents take “Empathetics.” In a 2012 study involving 100 residents, researchers found that doctors randomly assigned to take the course were judged by patients as significantly better at understanding their concerns and making them feel at ease than residents who had not undergone the training.

Riess said that while some doctors have told her they don’t have the time to be empathic, the skill has proved to be a timesaver rather than a time sink. It can help doctors zero in on the real source of a patient’s concern, short-circuiting repeated visits or those “doorknob moments” doctors dread, when the patient says “Oh, by the way . . . ” and raises the primary concern as the doctor is headed out of the room.

Because a lack of empathy and poor communication drive many malpractice cases, a large malpractice insurer, MMIC, is urging doctors it insures to take the “Empathetics” course. Another benefit: Empathy training appears to combat physician burnout.

“Empathy training is naturally self-rewarding,” said Laurie Drill-Mellum, a former emergency room doctor who is chief medical officer of the Minneapolis-based insurer. “It gives [doctors] the love back,” she said, referring to the positive feedback empathic doctors receive from their patients.

Both Riess and Tulsky say their interest in empathy was sparked by personal experience. In Riess’ case, it was the flood of patients in her psychiatric practice a decade ago who spent their time in therapy discussing devastating interactions with doctors. “These are not just innocuous effects,” she said, “but often experiences that were profound and deeply affected people’s lives.”

Tulsky said that his father, an obstetrician-gynecologist in a solo practice, routinely talked about his patients at dinner. “His stories were about their lives, so I got this idea that medicine was about more than the illness,” he recalled. In medical school, Tulsky said, “I was very drawn to challenging moments in patients’ lives and volunteered to give bad news,” particularly when he believed other doctors would botch it.

“I saw a lot that disturbed me,” Tulsky said. One memorable incident involved his chief resident loudly berating a frightened, impoverished and very sick old man, saying, “If you don’t have this operation, you’ll die. Don’t you understand?”

Tulsky said that researchers have found that some doctors don’t respond with empathy because they are clueless when it comes to reading other people. Many others, he said, do recognize distress but fear unleashing a flood of emotion in the patient, and sometimes in themselves.

“Doctors are explainaholics,” Tulsky said. “Our answer to distress is more information, that if a patient just understood it better, they would come around.” In reality, bombarding a patient with information does little to alleviate the underlying worry.

The “Empathetics” program teaches doctors “how to show up, not what to say,” said Riess. “We do a lot of training in emotional recognition and self-monitoring.” That includes learning to identify seven universal facial expressions — using research pioneered by psychologist Paul Ekman — and to take stock of one’s own emotional responses to patients or situations.

Some of the course is explicitly prescriptive: Make eye contact with the patient, not the computer. Don’t stand over a hospitalized patient, pull up a chair. Don’t conduct a monologue in off-putting medicalese. Pay attention to tone of voice, which can be more important than what is said. When delivering bad news, schedule the patient for the end of the day and do not allow interruptions. Find out what the patient is most concerned about and figure out how best to address that.

Andy Lipman has taken the Duke course twice: first as an oncology fellow in 2004 and last year as a practicing oncologist in Naples, Fla., when he felt in need of a “booster shot.” Oncology, he said, “is a full-contact” specialty with a high burnout rate.

Among the most important lessons Lipman said he learned during both sessions was to let go of “my own medical agenda, the desire to fix something or make something happen in that visit.” He learned to pace himself, monitor his reactions and talk less.

Every day, he said, he thinks about what he was told in 2004: “Never answer a feeling with a fact.” That means responding to a patient in a six-month remission from cancer who reports having a sore elbow by saying, “Tell me more about your elbow. This is probably scary stuff” and not “Your scans show no evidence of disease.”

One technique Lipman routinely employs is taking 15 seconds before entering an exam room to ask himself, “What is needed here?”

On the day he was interviewed, Lipman said, he used what he has learned with a patient with end-stage cancer. She was scheduled for a brief appointment but began weeping loudly as she told Lipman how alone she felt.

“I engaged, I expected the emotional response and I hung in there,” he said of the meeting, which lasted 45 minutes. “It felt good to me,” Lipman said, and he hoped it gave his patient some comfort.

Efforts To Instill Empathy Among Doctors Are Paying Dividends