When Joshua Martz tested positive for COVID-19 this summer in a Montana jail, guards moved him and nine other inmates with the disease into a pod so cramped that some slept on mattresses on the floor.

Martz, 44, said he suffered through symptoms that included achy joints, a sore throat, fever and an unbearable headache. Jail officials largely avoided interacting with the COVID patients other than by handing out over-the-counter painkillers and cough syrup, he said. Inmates sanitized their hands with a spray bottle containing a blue liquid that Martz suspected was also used to mop the floors. A shivering inmate was denied a request for an extra blanket, so Martz gave him his own.

“None of us expected to be treated like we were in a hospital, like we’re a paying customer. That’s just not how it’s going to be,” said Martz, who has since been released on bail while his case is pending in court. “But we also thought we should have been treated with respect.”

The overcrowded Cascade County Detention Center in Great Falls, where Martz was held, is one of three Montana jails experiencing COVID outbreaks. In the Great Falls jail alone, 140 cases have been confirmed among inmates and guards since spring, with 60 active cases as of mid-September. 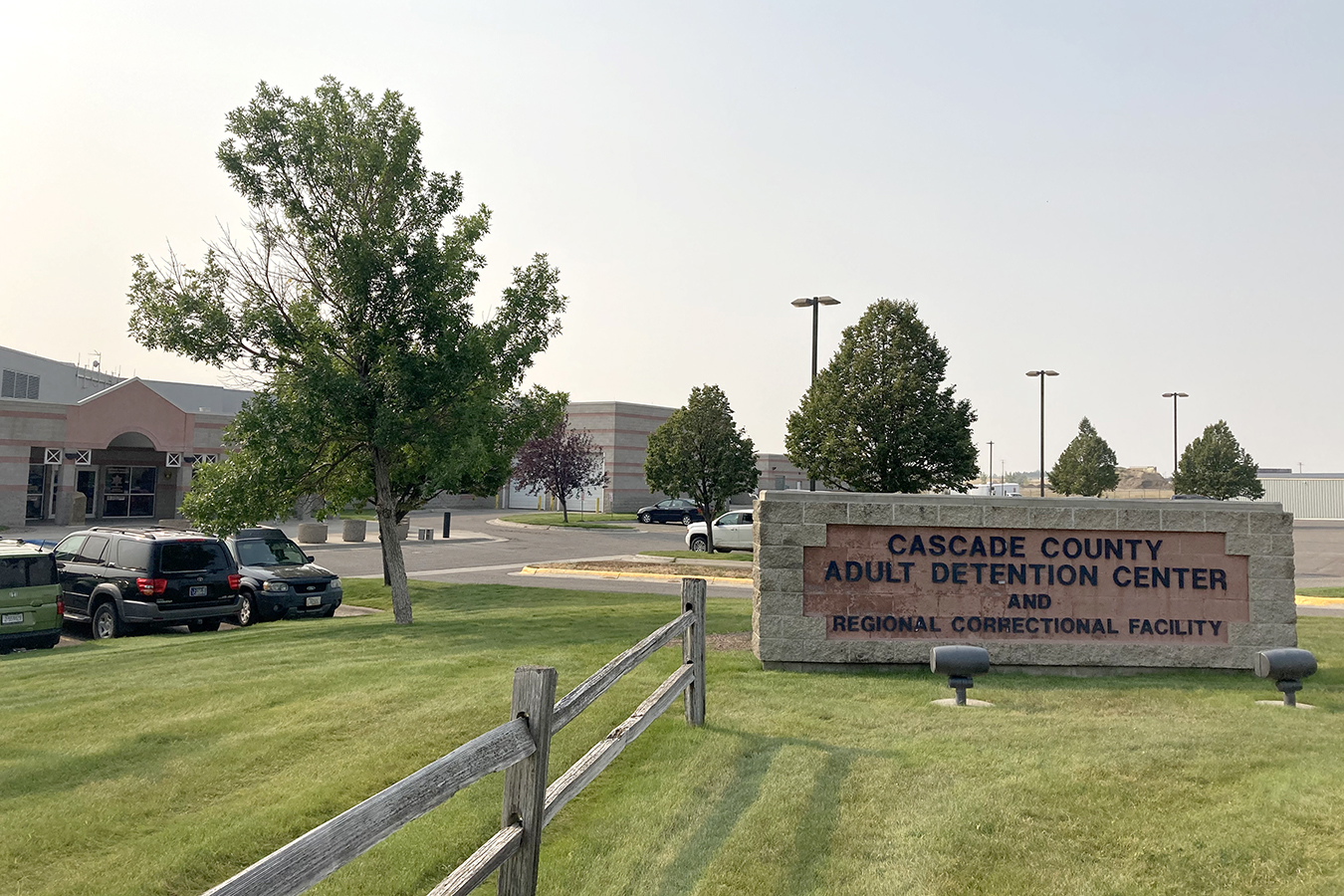 When inmate Joshua Martz tested positive for COVID-19 this summer at the Cascade County Detention Center in Great Falls, Montana, guards moved him and nine other inmates with the disease into a pod so cramped that some slept on mattresses on the floor.(Matt Volz/KHN)

One reason for the high COVID count in jails and the low count in prisons is that Montana for months halted “county intakes,” or the transfer of people from county jails to the state prison system after conviction. Sheriffs in charge of the county jails blame their outbreaks on overcrowding partly caused by that state policy.

Restricting transfers into state prisons is a practice that’s also been instituted elsewhere in the U.S. as a measure to prevent the spread of the coronavirus. Colorado, California, Texas and New Jersey are among the states that suspended inmate intakes from county jails in the spring.

But it’s also shifted the problem. Space was already a rare commodity in these local jails, and some sheriffs see the halting of transfers as giving the prisons room to improve the health and safety of their inmates at the expense of those in jail, who often haven’t been convicted.

The Cascade County jail was built to hold a maximum of 372 inmates, but the population has regularly exceeded that since the pandemic began, including dozens of Montana Department of Corrections inmates awaiting transfer.

“I’m getting criticized from various judges and citizens saying, ‘Why aren’t you quarantining everybody appropriately and why aren’t you social-distancing them?’” Cascade County Sheriff Jesse Slaughter said. “The truth is, if I didn’t have 40 DOC inmates in my facility I could better do that.”

Unlike convicted offenders in state prisons, most jail inmates are only accused of a crime. They include a disproportionately high number of poor people who cannot afford to post bail to secure their release before trial or the resolution of their cases. If they do post bail or are released after spending time in a jail with a COVID outbreak, they risk bringing the disease home with them.

Andrew Harris, a professor of criminology and justice studies at the University of Massachusetts Lowell, said he finds it troubling that more attention is not paid to the conditions that lead to COVID outbreaks in jails.

“Jails are part of our communities,” Harris said. “We have people who work in these jails who go back to their families every night, we have people who go in and out of these jails on very short notice, and we have to think about jail populations as community members first and foremost.”

Some states have tried other ways to ensure county inmates don’t bring COVID-19 into prisons. In Colorado, for example, officials lifted their suspension on county intakes and are transferring inmates first to a single prison in Canon City, Department of Corrections spokesperson Annie Skinner said. There, inmates are tested and quarantined in single cells for 14 days before being relocated to other state facilities.

Outbreaks are also occurring in county jails in states that never stopped transferring inmates to state prison. Several jails in Missouri have experienced significant outbreaks, with Greene County reporting in mid-August that 83 inmates and 29 staffers had tested positive. Missouri Department of Corrections spokesperson Karen Pojmann said the state never opted to stop transfers from county jails, likely because of a robust screening and quarantine procedure implemented early in the pandemic.

At least 1,590 inmates and 440 staff members have tested positive for COVID-19 in Missouri’s 22 prison facilities since March, according to state data. The COVID Prison Project ranks Missouri’s case rate 25th among the states — better than some states that halted inmate transfers, including Colorado, Texas and California.

The halting of transfers was a critical part of the response by officials in California, whose prisons have been among the hardest hit by COVID-19. An outbreak at San Quentin State Prison this summer helped spur Democratic Gov. Gavin Newsom to order the early release of 10,000 inmates from prisons statewide.

Stefano Bertozzi, dean emeritus at the University of California-Berkeley School of Public Health, visited San Quentin before the outbreak, and afterward helped pen an urgent memo outlining immediate actions needed to avert disaster. He recommended halting all intakes at the prison and slashing its population of 3,547 inmates in half. At that point, the California Department of Corrections and Rehabilitation was already more than two months into an intake freeze.

Overcrowding has long been an issue for criminal justice reform advocates. But for Bertozzi, the term “overcrowding” needs to be redefined in the context of COVID-19, with an emphasis on exposure risk. Three inmates sharing a cell designed for two is a bad way to live, he said, “especially for the guy who’s on the floor.” But if those cells are enclosed, they offer far better protection from COVID-19 than 20 inmates sharing a congregate dorm designed for 20.

“It’s how many people are breathing the same air,” Bertozzi said.

California resumed county intakes on Aug. 24 following the development of guidelines designed to control transmission risk and prioritize counties with the greatest need for space. But a huge backlog remains: 6,552 state inmates were still being held in county jails as of mid-September, according to corrections officials.

In Montana, the number of inmates at county jails awaiting transfer to prisons and other state corrections facilities was 238 at the beginning of September, according to state data obtained through a public records request.

Montana and county officials butted heads over delays in inmate transfers before the coronavirus, but the pandemic has increased the stakes.

“Once we had the issue with the pandemic and we had to maintain space for quarantining and isolating inmates, then it became even more critical because the space wasn’t really available,” Yellowstone County Sheriff Mike Linder said.

Montana Department of Corrections Director Reginald Michael acknowledged to state lawmakers in August that halting county intakes places a strain on counties but said it was “the right thing to do.”

“This is one of the reasons why I think our prisons are not inundated with the virus spread,” he told the Law and Justice Interim Committee.

Committee Chairman Rep. Barry Usher, a Republican, gave Michael his endorsement: “Sounds like you guys are doing a good job keeping it controlled and out of our prison systems, and everybody in Montana appreciates that.”

Since then, Montana officials have transferred up to 25 inmates a week, but they continue to block transfers from the three counties with outbreaks: Cascade, Yellowstone and Big Horn.

Martz dreaded the thought of COVID-19 following him out of jail. So much so that, after his release in early September, he walked to an RV park, where his wife met him with a tent.

Despite having tested negative for the virus prior to his release, he self-quarantined for a week before going home. The hardest part, he said, was not being able to immediately hug his 5-year-old stepdaughter. It “sucked,” but it’s what he felt he had to do.

“If somebody’s grandpa or grandmother had gotten it because I was careless and they ended up dying because of it, I’d feel horrible,” said Martz, who has returned home. “That’d be a horrible thing to do.”