The Affordable Care Act was expected to be a boon for eHealth Inc., the nation’s largest online health insurance broker. After all, the law required most Americans to have coverage, provided government assistance to afford it and allowed Internet brokers to sell Obamacare policies.

But while the health law helped pump up profits and stock prices for many hospitals, insurers and other health companies, eHealth has taken a beating. The company last year lost thousands of customers to the health law’s online exchanges where consumers shop directly for plans and find out if they qualify for subsidies.

The number of individuals covered by health policies from which eHealth earns a commission fell from 796,000 in December 2013, the year before the health law exchanges policies began, to about 585,000 in March. The company swung from a $1.7 million profit in 2013 to a $16 million loss in 2014, and its share price swooned by more than 75 percent. 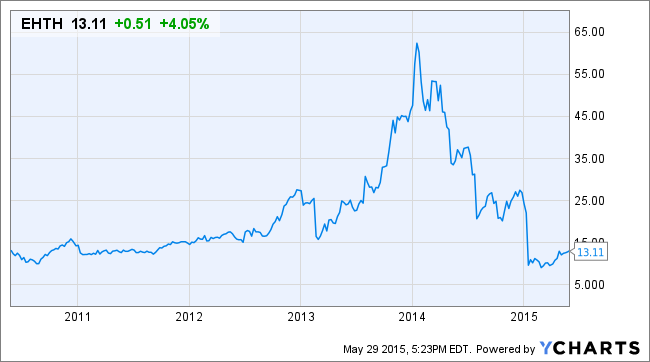 But eHealth might get a boost if the Supreme Court in June strikes down government subsidies for consumers in the 34 states using the federal exchange. More than 8 million people–nearly 9 in 10 of the people who bought coverage on the health law’s exchanges this year–received subsidies. Without subsidies, consumers would have little reason to use the federal exchange.

“Folks who may not be able to get a subsidy may go back to eHealth,” said David Styblo, an analyst with Jefferies LLC in Nashville. But he notes Wall Street is not counting on that partly because there is so much uncertainty about how Congress and the Obama administration would react if the subsidies were invalidated. In addition, some analysts believe that if the subsidies were not restored through a political compromise, many people would go without coverage because they could no longer afford it.

In conference calls with investment analysts, eHealth officials have avoided making it appear that they want the court to strike down the subsidies, but they acknowledge the case could affect the company’s future. “We are thinking a lot about” the court case, CEO Gary Lauer told analysts in April, a month after the company eliminated 160 jobs, or 15 percent of its workforce.  Lauer refused requests for an interview.

EHealth, which is paid a commission by health plans for each policy it sells, is not the only online broker that’s faced new hurdles as a result of Obamacare. But because eHealth, which was founded in 1997, is the only publicly traded online health insurance broker, it’s the only one that must publicly report its performance.

Chini Krishnan, CEO of online broker GetInsured, which like eHealth is based in Mountain View, Calif., said since online brokers have to send consumers’ information through the state and federal exchanges to apply for subsidies, they cannot offer a seamless buying experience to customers. And when consumers think about buying insurance, www.healthcare.gov has become the most well known site.

“Healthcare.gov has a huge megaphone but not the best consumer experience,” Krishnan said.

Even if online brokers can offer an easier and quicker shopping experience, it may be too late. “Folks who are interested in buying coverage know they need to go to healthcare.gov,” Styblo said.

Krishnan does not buy that notion.  He said private industry can come up with better ways to sell and enroll people than the federal government.

Shane Cruz, chief technology officer for online broker GoHealth, says Obamacare has taken the industry on “a real roller coaster ride.” The law expanded the pool of people seeking coverage, but insurers responded by cutting their commission rates to agents. The Chicago-based firm said it sold nearly 500,000 Obamacare plans this year, double the amount it sold in the first year of enrollment. Realizing healthcare.gov is the first thing people will see when they search online for coverage, GoHealth has reached out to consumers by partnering with big box retailers and tax preparers, which are advising customers about the consequences of not meeting the law’s coverage mandate.

EHealth, meanwhile, has turned its focus to selling Medicare Advantage plans on its website. About 16 million of the 50 million people on Medicare are enrolled in the private plans, though most shop for them each year on the government’s www.medicare.gov site. But with 10,000 people a day turning 65, and gaining eligibility for Medicare, even grabbing a small piece of this market could be lucrative for eHealth, Styblo said. In addition to the Advantage plans, eHealth has been active in helping seniors find Medicare supplement plans. The company’s number of Medicare policyholders was 155,600 at end of March 2015, up from 111,700 a year ago.