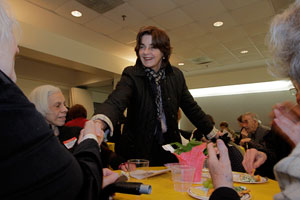 In Washington D.C., Councilwoman Mary Che visits Palisades Village, an aging-in-place community where neighbors help neighbors with basic services so that seniors can stay in their homes longer. (Evy Mages for The Washington Post)

Nearly three years ago, Harry Rosenberg and his wife, Barbara Filner, met with nine of their neighbors about starting an aging-in-place “village” in the Burning Tree community of Bethesda, Maryland. The idea: If neighbors could help one another with basic services such as transportation and simple home maintenance and with friendly visits, people could stay in their homes longer as they aged. It took 19 months of planning and organizing, but Burning Tree Village accepted its first request for assistance in November of 2008: helping an 81-year-old widow take out her trash and driving her to the doctor.

The group is still suffering growing pains. It receives only a handful of requests for help. Like some similar organizations, it charges no dues and it has about 65 “friends”: people who volunteer, people who receive help, people who just want to be associated. It operates on a shoestring $4,000 budget raised from donations, but it has held a series of well-attended community events, including neighborhood walks and restaurant outings. “We are,” says Rosenberg, 73, “a viable presence in the neighborhood.”

The Washington D.C. area has become a hotbed for these villages. There are six in the city itself,  at least two in the Virginia suburbs and eight in various stages of development in the Maryland suburbs. “The idea has spread like wildfire,” says Naomi Kaminsky, president of one, Chevy Chase at Home.

Still, organizing a village is difficult, say those who try. It can easily take two to three years before a new aging-in-place community can roll out services. And many groups are still struggling after five years. Fundraising, squabbles over priorities, legal and insurance issues, and the challenges of building a network of volunteers all make the process lengthy and difficult.

“It is a lot of work,” says Nancy Intermill, executive director of Midtown Village in Lincoln, Neb. “You need a group of people committed to the concept, and committed to working together.”

Most villages aim to recruit at least 200 members, often 60 or older. The process generally starts with a neighborhood survey, followed by visits to promote it at local schools, houses of worship and community associations. Finally, neighbors are approached one at a time or in small groups. Flyers or e-mail won’t do it, organizers say.

“No one has ever joined unless they were asked by a human being,” says Andrew Mollison, 70, president of the 65-member Palisades Village in Northwest Washington. Still, he adds, when encouraged to join, many elderly neighbors are likely to respond, “I’m not ready yet.”

Nonetheless, village organizers say, people seem instinctively attracted to the idea of neighbors helping neighbors stay at home as they age. Today, there are at least 48 fully functioning villages around the country and more than 600 in development, says Candace Baldwin, senior policy adviser at NCB Capital Impact, a nonprofit that has created an informal association of these groups called the Village to Village Network.

There may be as many variations on the village theme as there are communities. Each village attempts to meet the needs of its community in its own way. Some are intergenerational, while others are for seniors only. Some charge hundreds of dollars in annual dues and have paid staff; others assess members little or nothing. Some arrange exclusive deals with a single agency to provide home health aides or companions, while others provide lists of member-recommended firms. Some rely on informal volunteering, while others keep records so that members receive free services in exchange for giving their own time. “The nice thing about villages is there is no rule book,” says Mollison.

However, villages seem to be evolving around three basic designs. The first was pioneered by Community Without Walls in Princeton, N.J., in 1992. Today, it has more than 450 members who belong to one of six “houses.” Annual dues are $30 for a couple. Much of what it does is social: There is a bird-watching club and even a theater group. Nearly all of its services, such as rides to the doctor or the store, are provided by volunteers. For those who need more assistance, the group has arranged for a local nonprofit to coordinate care and provide access to a 24-hour-a-day emergency hotline. For this higher level of assistance, singles pay $300 annually and couples pay $350, plus fees for any services they require, such as a home health aide.

The second model is based on Boston’s Beacon Hill Village, which also started in the 1990s. Beacon Hill charges annual dues and delivers both volunteer and paid help. In Washington, Capitol Hill Village, which has about 200 members, is probably the best example of this model. Capitol Hill began providing services about two years ago and has about 200 members who generally pay annual dues of $530 for individuals and $800 for households; about 30 low-income members pay less.

A third model, championed by a nonprofit called Partners in Care, is built on the model of time banking, or service exchange. The idea: You agree to pick up groceries for a neighbor and, in return, another volunteer fixes your leaky faucet. Begun in 1993 and based in Anne Arundel County, Maryland, Partners in Care has 2,600 volunteers around the state.

Many experts believe the Beacon Hill/Capitol Hill model will be the most lasting because a professional staff buttresses the efforts of volunteers. Capitol Hill has an executive director and full-time social worker and offers a concierge service that arranges for paid assistance from preselected vendors. Yet it relies on social events and volunteers to thrive. In one recent month, nearly 90 percent of more than 200 requests for help were filled by volunteers. Most were for rides or for help changing a light bulb or hooking up a TV.

Palisades Village is copying much of that design. The village, which began with a small group of neighbors in early 2006, hired a part-time executive director in 2008 and offered its first services to 31 members in January of 2009. “We wanted to hire her full time,” says Mollison, “but we didn’t have enough money.” Mollison figures he puts in 25 hours a week as unpaid president.

The village raised about $60,000 last year from dues, gifts and start-up grants from the city and local foundations. Dues are similar to Capitol Hill’s, and to help reach its goal of about 200 members, the group has expanded to include a nearby neighborhood. Mollison believes a key to sustainable financing is attracting younger residents who can join at reduced dues or simply volunteer.

Chevy Chase at Home also favors the dues-and-staff route but is still in the early stages of development. Kaminsky, who says she is in her early 70s, says her group is not yet ready to recruit members or think about a budget. For now, they are working to raise their profile with twice-a-month informal gatherings. “An active social component is very important,” says Ken Hartman, a county employee who advises the villages.

In contrast to Palisades and Chevy Chase, Burning Tree Village has chosen an all-volunteer, dues-free model. “Philosophically, it feels right to not charge neighbors for this,” Rosenberg says. But he worries about the group’s sustainability as its founders age: “If they move or die, what is viable one day may disappear the next.”

But Rosenberg has already learned the value of his effort. A year ago, as his wife was dying of cancer, people he had not known just months before were offering help. “Barbara and I were getting neighborly support we would never have gotten,” he remembers. By that measure, Burning Tree Village is already a success.

For Senior Care, Sometimes It Does Take A Village