SAN FRANCISCO — Janet Prochazka was active and outspoken, living by herself and working as a special education tutor. Then, in March, a bad fall landed her in the hospital.

Doctors cared for her wounds and treated her pneumonia. But Prochazka, 75, didn’t sleep or eat well at Zuckerberg San Francisco General Hospital and Trauma Center. She became confused and agitated and ultimately contracted a serious stomach infection. After more than three weeks in the hospital and three more in a rehabilitation facility, she emerged far weaker than before, shaky and unable to think clearly.

She had to stop working and wasn’t able to drive for months. And now, she’s considering a move to Maine to be closer to relatives for support.

“It’s a big, big change,” said her stepdaughter, Kitty Gilbert, soon after Prochazka returned home. “I am hopeful that she will regain a lot of what she lost, but I am not sure.”

Many elderly patients like Prochazka deteriorate mentally or physically in the hospital, even if they recover from the original illness or injury that brought them there. About one-third of patients over 70 years old and more than half of patients over 85 leave the hospital more disabled than when they arrived, research shows.

As a result, many seniors are unable to care for themselves after discharge and need assistance with daily activities such as bathing, dressing or even walking.

“The older you are, the worse the hospital is for you,” said Ken Covinsky, a physician and researcher at the University of California, San Francisco division of geriatrics. “A lot of the stuff we do in medicine does more harm than good. And sometimes with the care of older people, less is more.”

Hospital staff often fail to feed older patients properly, get them out of bed enough or control their pain adequately. Providers frequently restrict their movements by tethering them to beds with oxygen tanks and IV poles. Doctors subject them to unnecessary procedures and prescribe redundant or potentially harmful medications. And caregivers deprive them of sleep by placing them in noisy wards or checking vital signs at all hours of the night.

Interrupted sleep, unappetizing food and days in bed may be merely annoying for younger patients, but they can cause lasting damage to older ones. Elderly patients are far different than their younger counterparts — so much so that some hospitals are treating some of them in separate medical units.

San Francisco General is one of them. Its Acute Care for Elders (ACE) ward, which opened in 2007, has special accommodations and a team of providers to address the unique needs of older patients. They focus less on the original diagnosis and more on how to get patients back home, living as independently as possible.

Early on, the staff tests patients’ memories and assesses how well they can walk and care for themselves at home. Then they give patients practice doing things for themselves as much as possible throughout their stay. They remove catheters and IVs, and encourage patients to get out of bed and eat in a communal dining area.

“Bed rest is really, really bad,” said the medical director of the ACE unit, Edgar Pierluissi. “It sets off an explosive chain of events that are very detrimental to people’s health.”

Such units are still rare — there are only about 200 around the country. And even where they exist, not every senior is admitted, in part because space is limited.

Prochazka went to the emergency room first, then intensive care. She was transferred to ACE about a week later. The staff weaned her off some of her medications and got her up and walking. They also limited the disorienting nighttime checks. Prochazka said she got “the first good night of sleep I have had.”

But for her, the move might have been too late.

“She will not leave here where she started,” Pierluissi said several days before Prochazka was discharged. “She is going to be weaker and unable to do the things you really need to do to live independently.”

How hospitals handle the old — and very old — is a pressing problem. Elderly patients are a growing clientele for hospitals, a trend that will only accelerate as baby boomers age. Patients over 65 already make up more than one-third of all discharges, according to the federal government, and nearly 13 million seniors are hospitalized each year. And they stay longer than younger patients.

Many seniors are already suspended precariously between independent living and reliance on others. They are weakened by multiple chronic diseases and medications.

One bad hospitalization can tip them over the edge, and they may never recover, said Melissa Mattison, chief of the hospital medicine unit at Massachusetts General Hospital.

“It is like putting Humpty Dumpty back together again,” said Mattison, who wrote a 2013 report detailing the risks elderly patients face in the hospital.

Yet the unique needs of older patients are not a priority for most hospitals, Covinsky said. Doctors and other hospital staff focus so intensely on treating injuries or acute illnesses — like pneumonia or an exacerbation of heart disease — that they can overlook nearly all other aspects of caring for the patients, he noted.

In addition, hospitals face few consequences if elderly patients become more impaired or less functional during their stays. The federal government penalizes hospitals when patients fall, get preventable infections or return to the hospital within 30 days of their discharge. But hospitals aren’t held accountable if patients lose their memories or their ability to walk.  As a result, most don’t measure those things.

“If you don’t measure it, you can’t fix it,” Covinsky said.

Improving care for older patients requires an investment that hospital administrators are not always willing to make, experts said. Some argue, however, that the investment pays off — not just for older people but for hospitals themselves as well as for a country intent on controlling health care spending.

Though research on the financial impact of problematic hospital care for the elderly has been limited, a 2010 report by the Department of Health and Human Services’ Office of Inspector General found that more than a quarter of hospitalized Medicare beneficiaries had suffered an “adverse event,” or harm as a result of medical care.

Those events, such as bed sores or oxygen deficiency, cost Medicare about $4.4 billion annually, according to the report. Physicians who reviewed the incidents determined that 44 percent could have been prevented.

In addition to outright mistakes, poor or inadequate treatment in hospitals leads to needless medical spending on extended hospital visits, readmissions, in-home caregivers and nursing home care. Nursing home stays cost about $85,000 a year. And the average hospital stay for an elderly person is $12,000, according to the Agency for Healthcare Research and Quality. 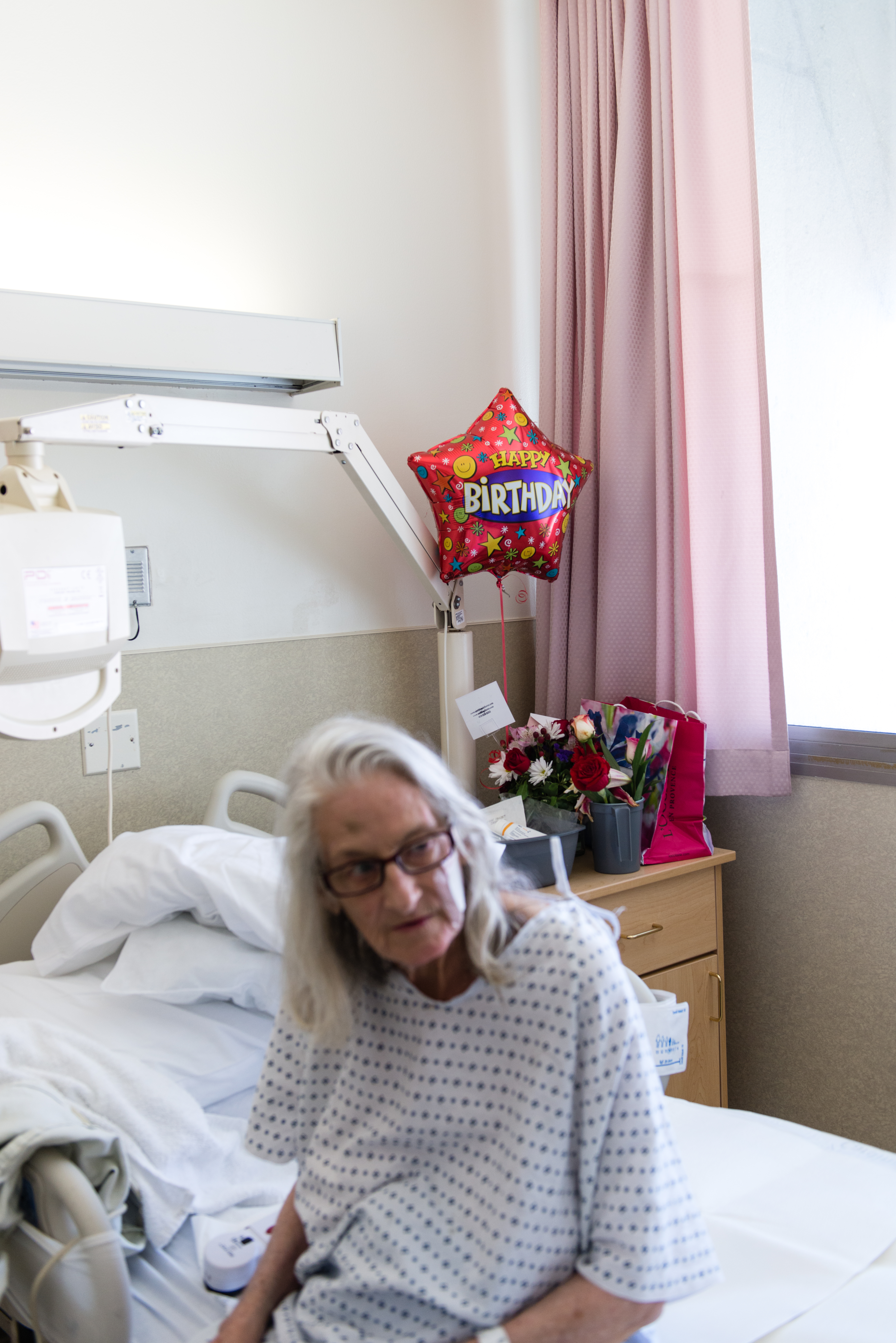 Patient Janet Prochazka, 75, celebrated her birthday during her stay at San Francisco General Hospital. Prochazka was admitted to the hospital in March after injuring herself in a fall. (Heidi de Marco/KHN)

“If you don’t feed a patient, if you don’t mobilize a patient, you have just made it far more likely they will go to a skilled nursing [facility], and that’s expensive,” said Robert Palmer, director of the geriatrics and gerontology center at Eastern Virginia Medical School and one of the brains behind the idea of ACE units.

ACE units have been shown to reduce hospital-inflicted disabilities in older patients, decrease lengths of stay and reduce the number of patients discharged to nursing homes. In one 2012 Health Affairs study, Palmer and other researchers found that hospital units for the elderly saved about $1,000 per patient visit.

After coming home, Prochazka said she felt weak. It took weeks of walking her labradoodle, Gino, to regain strength.

But Prochazka, who is highly educated, still has some short-term memory loss, Gilbert said.

Prochazka knows that her life after hospitalization is different than before — she will have to depend more on others. It’s not an easy adjustment, she said.

“I have been somebody who has always been both mentally and physically active,” she said. “Before I fell … I was respected for what I have and what I did and all of a sudden, I’m not.”

She said her time at San Francisco General was frustrating. Getting the infection just as she was starting to recover was especially hard, she said. “I felt like I had been dealt a blow I really didn’t need.”

For other patients, being admitted proactively to the special geriatric unit can stave off such precipitous declines. 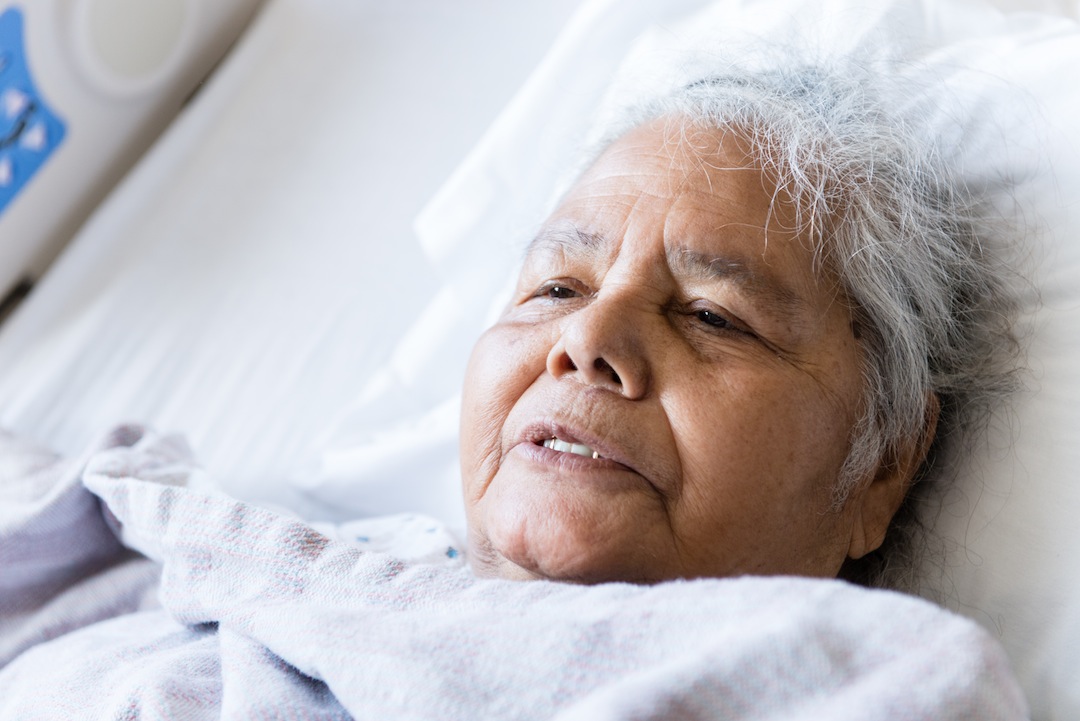 Rosenda Esquivel, 80, spent 18 days at San Francisco General, much of it in the unit, this spring. She suffered no noticeable setbacks, physical or mental, during her time in the hospital, according to Annelie Nilsson, a clinical nurse specialist in the unit.

Esquivel, an animated woman who used to work as a home caregiver, was admitted with intense arthritic pain and, while hospitalized, underwent a procedure to address an abnormal heartbeat.

Soon after her arrival, Pierluissi, the ACE unit medical director, speaking to Esquivel in her native Spanish, sought to determine how independent she was at home. He learned that a friend helped take care of her but that she took pride in cooking and cleaning for herself.

The doctor noticed that Esquivel needed help to get up from a chair but that she could get around with a walker. Her memory, though, wasn’t too strong. A few minutes after hearing three words — “honesty,” “baseball” and “flower” — she could only recall one of them.

Pierluissi came up with a plan for her time in the hospital: Get Esquivel’s pain under control. Make sure she walks three or four times a day. Arrange for her to have a caregiver at home to remind her to take her diabetes and blood pressure medications.

Then, release her as fast as possible.

“The less time she spends here, the better,” Pierluissi said.