If pot laws were colors, a map of the U.S. map would resemble a tie-dye T-shirt. In some states, marijuana is illegal. In others, it’s legal for medical purposes. And still in others, it is even legal for recreational use.

Five more states could come into that last category this fall, as voters decide whether to legalize it in California, Nevada, Maine, Massachusetts and Arizona.

It was only six years ago that Arizona approved marijuana for medicinal use, and that’s a stark contrast to Oregon, where medicinal marijuana was legal for almost two decades before smoking pot for fun became OK last year.

Opposition to recreational use in Arizona has been organized and vocal. A group that includes two county attorneys sued, unsuccessfully, to get it off the ballot.

And then there are people like Debbie Moak, 59, who said she put her son in drug rehab when he was 20. “A lot of these kids who are going to be impacted the most by this, they won’t be voting in this election,” said Moak, who lives outside of Phoenix. “This is where we need to be the adult in the room and protect the kids.”

Moak said pot led her son to use harder drugs. Cocaine became his drug of choice, and he dropped out of college and eventually became homeless.

“It tears a family apart,” she said. “Addiction becomes a disease of the family, and I’ve lived it, in the trenches. And I don’t want to see this happen for any other family.”

But Moak used to see that pretty much daily, back when she ran a nonprofit called Not My Kid that worked to keep young people off drugs. For nearly two decades, she spoke to parents in pain because they were unable to reach their children who were sinking deeper into drug dependency. Her own son is now in his 30s and sober, but his recovery took years.

She opposes the approval of medical and recreational marijuana laws because she fears it will lead to more acceptance of the substance she views as tremendously harmful.

Coming at this from a completely different direction is 60-year-old food editor Martha Holmberg. She lives in Portland, Ore., and says she smoked a lot of marijuana in high school and college then didn’t touch pot again until she finished bringing up her daughter. Now it’s part of the fabric of her social life.

“I don’t do it with people that I don’t know well,” Holmberg said. “But if I’m hanging out with girlfriends or we’re going over to a friend’s house, I will usually bring weed and say, ‘Hey, anybody want to get high?’ ” 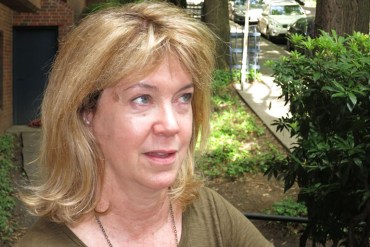 Oregonian Martha Holmberg says she used to smoke pot in high schol and college, but stopped for years while raising her family. With pot legal in Oregon and growin in acceptance, she’s returned to smoking occasionally. (Kristian Foden-Vencil/Oregon Public Broadcasting)

Some do and some don’t. “And it all flows very comfortably in that situation,” she said. “It’s not like the pot smokers have to go off to the corner.”

Holmberg recently hosted two women writing a pot cookbook. And they needed somewhere legal to try out recipes. The main issue: How much weed to include in each dish?

The equivalent for alcohol would be to figure out whether you make a Moscow Mule with a finger of vodka or a pint. Holmberg says they proved to be a little too cautious.

“At the end of the evening people weren’t really very high,” she says. “I think some people were disappointed. We actually pulled out a vape pen for anybody who wanted to get high. But it was much better that way. People felt reassured.”

For some people in Arizona, the scene Holmberg described would be shocking. But the introduction of medical marijuana here in 2010 made it a lot more palatable for others. Like Lisa Olson, a mother of five who lives in Mesa, outside of Phoenix. She says pot helps ease the symptoms of her multiple sclerosis.

How does her marijuana use fit in with family life? “Basically, the way we ended up handling it was a lot like alcohol,” she said. “So my kids certainly see me drinking a glass of wine with most dinners. They know that’s not for them. That’s for the adults.”

She thinks adults should be able to use pot recreationally, too. For someone like Olson, who had always abstained from drugs, that’s quite a change. Once she saw how much good marijuana did for her, she felt it shouldn’t only be reserved for people with a few specific ailments.

She’s passed this newfound openness onto her children. Jake Olson, 20, said the “just say no” message he got from school wasn’t necessarily true. He appreciated hearing that there are times when use in moderation is OK and shouldn’t be equated with heavier drugs.

“It’s really funny because, you know, most teenagers don’t figure out things like that through their parents,” he said. “But I am that exception. I am that person who learned that maybe not all bad things are bad, from my parents.” 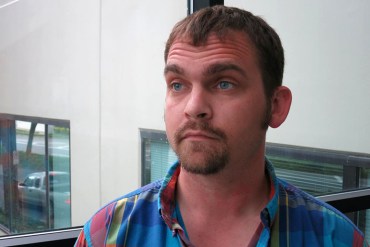 Patrick Caldwell, who also lives in Oregon, says pot acceptance is gradually taking hold in his state. But he will still only bring marijuana to certain events and situations. (Kristian Foden-Vencil/Oregon Public Broadcasting)

Acceptance is growing in Oregon. But it’s been a gradual process. Patrick Caldwell has a Portland business selling pot containers. He is 29 and brings cannabis-infused sodas to parties. He said he might share one at, say, a bachelor party but not at a family picnic. Caldwell doesn’t want pot to be taken lightly.

“I want my nephews to be able to make their own informed decision about cannabis without being influenced by the fact that I so regularly use it,” he said.

He thinks people need to respect what they’re getting into. But he hopes that in a few years, bringing pot to a family picnic will be no different than bringing a six-pack.

This story is part of a partnership that includes Oregon Public Broadcasting, KJZZ, NPR and Kaiser Health News.