This is a story about data. Lots and lots of data.

And not just any data. Extremely sensitive data.

The U.S. health system is undergoing a major technological shift right now. Some equate it to finally catching up to where the banking and airline industries have been for years: Doctors and hospitals are moving to electronic health records systems, and it’s not easy.  Cerner, based in Kansas City, Mo., has grown into one of the nation’s biggest players in the field of health information technology.

Cerner’s main headquarters seems like a college campus, peppered with trees and walking paths, along with some Star Trek-like architecture. 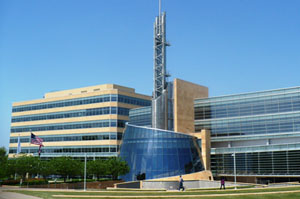 Cerner’s headquarters, which some call “The Bunker,” are based in North Kansas City. The multi-billion dollar company started here three decades ago (Photo by Elana Gordon/KCUR).

Brian Smith oversees the part of the campus that he and many others at Cerner commonly refer to as “The Bunker.”

It’s one of the data centers that Cerner has constructed in recent years, with concrete walls built to withstand a strong tornado, armed guards and multiple security levels. It’s designed to protect what’s inside: a temperature-controlled room full of thousands of servers. There are back-up generators for back-up generators, Smith says, to be sure that this health information isn’t compromised or made inaccessible by a power outage.

This data center and Cerner’s others are responsible for health information generated by hundreds of hospital systems and doctors’ offices throughout the U.S.

This could be your data, that prescription your doctor just entered into his or her computer, that lab result that just got processed. The transactions go through here in real time.

Data storage is a big selling point for Cerner, but it’s one part of what the company does. It has software for all sorts of medical settings, and it offers other IT services, such as sending Cerner technicians into hospitals to run the systems. 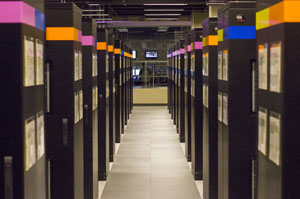 Cerner started small. Founder and CEO Neal Patterson recently told shareholders that the company started in 1979 when he and some friends were studying accounting at an iconic Kansas City park, called Loose Park.

“So we probably did more day dreaming about starting a company than we did studying for the exam,” he says. “Loose Park was a beautiful place to have envisioned this.”

Today, Cerner has a market value around $17 billion. The company employs about 12,000 people, with more than half based in Kansas City. In the last two years alone, Cerner has hired 3,000 people. Mike Nill the company’s chief operating officer, says if you’re an engineer, you’ve got a job in Kansas City.

“In fact, someone asked me last week, they said what strategies did Cerner execute to survive the recession,” says Nill. “My answer was, ‘What recession?'”

Federal policies have spurred a lot of this growth. Chas Roades, with the consulting firm The Advisory Board, says in the last few years, the government has made more than $20 billion available to support health providers digitize their records.

“It was a little like when the railroads were started in the late 19th and early 20th century,” Roades says. “It’s public funding that has jump-started a big, big wave of investment in these IT systems among hospitals and doctors.”

It has been a gold rush for companies like Cerner. Roades says he often hears that a hospital is spending a third of its capital on information technology.

All this federal money has fueled a lot of companies, but Cerner is one of two companies that are leading the pack.

“Our count is they’re in 15 percent of all U.S. hospitals, nearly 800 hospitals,” Jason Hess, with Klas Research.

Hess says Cerner is locked in “a two horse race,” trailing the private company, Epic, based in Wisconsin. Epic has 24 percent market share for acute care hospitals with more than 200 beds to Cerner’s 21 percent in that same market, according to a recent report by Klas. Epic has also won the business of some of the largest and most prestigious academic medical centers. In fact, Cerner lost a major contract to Epic in its back yard several years ago when a big Kansas City hospital system made the switch.

Still, Cerner’s impressive growth over the past five years has presented huge challenges. Hess says it can be difficult to recruit enough qualified engineers and maintain quality for continually evolving software. Making sure it’s user friendly is key, too.

So while this is a story about data, all this data Cerner is capturing is just the beginning of a much bigger story.

Patterson says it’s now critical to figure what to do with that data – how to analyze what a cholesterol test means, for example, in light of a patient’s medical history, or how to find the best medication for an individual.

“That’s where the cost savings will come from, is keeping you out of hospital, out of emergency room, [away from] specialists, but make you healthier,” says Patterson.

Achieving those results is the challenge that Cerner — and many other companies and providers — are racing to figure out.

This piece is part of a collaboration with NPR, KCUR, and Kaiser Health News.