In a perfect world, patients with advance directives would be confident that their doctors and nurses — no matter where they receive care — could know in a split second their end-of-life wishes.

But this ideal is still in the distance. Patients’ documents often go missing in maze-like files or are rendered unreadable by incompatible software. And this risk continues even as health systems and physician practices adopt new electronic health records. So advocates and policymakers are pushing for a fix.

The problem isn’t new, experts noted. Advance directives were lost during the era of paper records, too. But, so far, digital efforts have fallen short.

“When these systems don’t work — and currently, they don’t work well enough — then that has a huge negative feedback on doctors and patients and families,” said Dr. Lachlan Forrow, director of the ethics and palliative care program at Boston’s Beth Israel Deaconess Medical Center. “Like, why even bother?” Thinking through and writing down end-of-life preferences can be grueling, he added.

Still, end-of-life planning has been encouraged by ethicists and experts in recent years, who say it communicates patient choices about medical interventions like being connected to a ventilator or feeding tube, or being resuscitated after heart failure — especially when patients can’t speak for themselves. This January, Medicare began paying doctors to discuss end-of-life wishes with patients, a policy almost 90 percent of Americans support. Meanwhile, according to 2015 figures from the Kaiser Family Foundation, 60 percent of adults older than 65 have such directives. (KHN is an editorially independent program of the foundation.)

Here’s how difficulties arise. Maybe a patient’s doctor uses one record system and the emergency room another. If the software doesn’t match up, the ER doctors may be unable to tell if the patient has a preference like a “do-not-resuscitate” order. 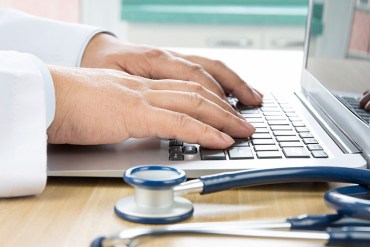 “An individual will fill out an advance directive, but unless they bring a copy with them, the provider will likely not know or see it exists,” said Kim Callinan, chief program officer at Compassion & Choices, a Colorado-based group that advocates for end-of-life care options.

Also, older patients, who are increasingly likely to have a directive, often get treatment from varied sources — surgeons, hospitals, nursing homes, primary physicians. That increases the odds of unaligned systems, said Dr. Irene Hamrick, who directs geriatric services in family medicine at the University of Wisconsin-Madison.

An additional complication stems from system design. Many systems don’t have a dedicated tab to mark where such information — if it exists — is stored. After doctors and nurses click through various pages, they still don’t know whether they looked in the right place. Time doesn’t always allow this kind of search.

“If they’re not able to access the advance directive quickly and easily, they’re honestly likely not to use it,” said Torrie Fields, senior program manager for palliative care at Blue Shield of California. “They’ll end up erring on the side of the most treatment possible.”

No one has researched how often this flaw yields unwanted treatment for dying patients. Based on anecdote, it’s “really common,” said Judy Thomas, CEO of the Coalition for Compassionate Care of California, an end-of-life care advocacy group.

Changes may lie ahead. Developers of record systems are introducing functions that could make it easier to find and read an advance directive, said Harriet Warshaw, executive director of the Boston-based Conversation Project, which encourages families to discuss end-of-life options. Epic Systems, a Madison, Wisconsin-based company that is among the dominant sellers for electronic health records, has added a tab intended to indicate clearly whether a patient has an advance directive on file. Cerner, based in Missouri, has partnered with a website, MyDirectives. Patients can upload their forms to that website, and doctors can reach it through Cerner.

Cerner, Robke added, is dedicated to helping “overcome [the] barriers to data exchange” between different software systems that can currently block doctors from seeing advance directives.

In Congress, lawmakers have expressed interest in making directives “portable” — that is, easily accessible. Legislation introduced in the Senate by Sen. Mark Warner, D-Virginia, includes provisions that could push health facilities to ensure compatibility across different health records for advance directives. Rep. Earl Blumenauer, D-Oregon, is also working on legislation, he said in an interview.

Hospitals and health systems are also making adjustments. The hospital at Oregon Health & Science University, California-based Sharp Hospice and Gunderson Health in Wisconsin are among those that have made in-house software revisions to make advance directives easy to find in electronic health records — for instance having IT teams add tabs on the record’s main page to indicate if a patient has end-of-life planning documents. Representatives of those hospitals said such efforts aren’t the norm, though.

Meanwhile, a number of states, including Virginia, Vermont, North Carolina and Arizona, have created online databases for residents to upload and store their advance directives. Recent figures are hard to come by, but in 2007, nine states were counted to have these in place. In these instances, doctors can go online to find a patient’s advance directive on those websites. They’re secured websites, and directives are password protected, requiring special logins from both patients and doctors, but specifics vary from state to state.

But there’s debate over how to finance state websites — in North Carolina, for instance, patients pay a $10 one-time fee to upload their advance directive. That can be an easy, low-cost way to maintain a site’s upkeep, but it can also discourage people from doing something they already find unappealing, said Marian Grant, director of policy and professional engagement at the Coalition to Transform Advanced Care and an associate professor at the University of Maryland School of Nursing.

These fixes lead to other complications, too. Directories specific to a particular state don’t necessarily accommodate patients who travel regularly between states — for example, a patient who sees one doctor in New Jersey and another in New York. And doctors navigating a cumbersome health record system may not take the additional time to check multiple websites.

“If you are sick enough and worried about finding your advance directives, it’s a critical situation. We are moving very fast,” said Grant. “We don’t have extra staff to say, ‘She might have an advance directive somewhere — check the top five directories and let me know.’ A busy resident is going to look in one place, and if they don’t find it, move on.”