In his new book, “Reinventing American Health Care,” Ezekiel Emanuel offers some surprising predictions about where health care is going in the next decade and beyond, including forecasting the end of health insurance companies as we know them. Along the way, readers will learn more about what’s actually in the Affordable Care Act and its tortuous political path to passage. There’s health care trivia too, including the fact that compulsory health insurance dates back to 1790, when ship owners had to buy medical insurance for their seamen. Who knew? 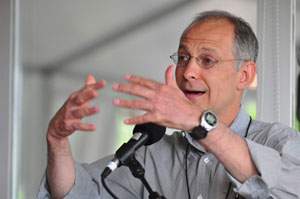 Ezekiel Emmanuel (Photo by The Aspen Institute via Flickr)

Emanuel was a special adviser on health policy to the While House from 2009 to 2011. Trained as a breast oncologist, he’s currently chair of the department of medical ethics and health policy at the University of Pennsylvania.

We discussed his book recently. What follows is an edited and condensed version of that conversation.

Q. Your book offers a strong defense of the Affordable Care Act. Do you think you’ll change any minds?

A. I hope I put it in context. I’m not an unalloyed advocate of the Affordable Care Act. I recognize and say explicitly in the book that it’s not a perfect law. But I try to put it in context that the health care system was broken in 2009 and everyone agreed we needed to do something and reform was essential. This is certainly a step in the right direction across all relevant domains: access, cost, quality and prevention. I have lots of criticisms, and I point them out in book. But staying with what we had was untenable.

Q. You say that the ACA will lead to more affordable health care for many, and it’s true that premium tax credits will help reduce the sticker price on a plan. But what happens when people realize that hardly anything is covered until they spend down a $2,000 or $3,000 or even $5,000 deductible?

A. A major purpose of insurance is to protect people from large random losses, and the insurance on the exchange definitely does that. That is the fundamental thing. One of the better parts of the bill is that we’re going to give people coverage in preventive services and in the primary care area, and that does seem to me to be the right balance. You encourage people on the primary care side and protect them from large random losses.

Q. Should more people be able to buy catastrophic coverage?

A. It turns out not to be that much cheaper because 10 percent of people use 65 percent of the dollars. So [allowing more people to buy those catastrophic plans] doesn’t save that much. That’s why I’m against copper plans. There’s been some talk on the Hill of [setting up a new class of plans that have lower premiums and higher out-of-pocket costs than the current bronze plans], but you’re not going to save that much money.

Q. As you say, the ACA requires that most people be able to get recommended preventive services without paying anything for them. Yet people have no idea that’s a benefit of the law. What needs to change?

A. The communications strategy wasn’t so hotsy totsy. That’s been a problem. Not only preventive services, but what we’re trying to do to decrease obesity and improve wellness. I agree. We needed a better communication strategy. It’s been one of the sore points even before the law was passed. I think eventually people will realize there’s no copay for preventive services. And that that’s interesting and exciting.

Q. You talk about the importance of bundled payments frequently in the book, when providers get paid for treating people for an entire “episode of care” rather than for individual services, as is common today. What do bundled payments look like to consumers and how will it improve their care?

A. One of the problems for most consumers is the fragmentation of care, the fact that there’s pretty bad communication and coordination of care between your primary care physician and any specialist you might go to. One of the strengths of bundled payment is that it requires coordinated care and a reorientation toward the patient. Lots of people agree the fee-for-service financial incentive structure is a problem. The appeal of bundled payment is that it’s the easiest way to shift doctors and hospitals away from fee for service.

Q. You predict that by 2025 fewer than 20 percent of workers in the private sector will get coverage through their employers. Won’t that mean higher costs and less generous coverage for a lot of people?

A. I’m definitely in the minority in that prediction. I recognize that Massachusetts is the best example against me. In Massachusetts after reform, there were more employers adding coverage. And my prediction is conditional on the exchanges getting to be really desirable shopping venues. They have to get up to the range of quality of Zappos or REI. I think the only way it makes sense for people is if they can get pretty equivalent plans on the exchange. People say, “Here’s my plan, and there’s one that’s roughly equivalent on the exchange.”

Q. You also predict the end of insurance companies as we know them. Rather than continuing to function as the middleman between employers and health care providers, you say insurers may themselves contract with networks of doctors and hospitals, morphing into integrated health care delivery systems. But a one-stop shop isn’t always good for consumers. Networks are restrictive, and at least now, if your insurer turns you down for treatment, your doctor may go to bat for you.

A. I don’t agree with you. In general, integrated systems do a pretty good job compared to lots of other ways care could be delivered. We like the adversarial system. We believe that’s the best. On the other hand, with integrated networks you can have better coordination of care. And people are mildly sticky. Once you pick an insurance network, you tend to stick with it. That’s also good for the insurer. If someone selected you, year in and year out you’ll be with them. That changes the dynamic. And to the extent people are long-term keepers, that’s going to be a better arrangement.

Q. You talk about integrating mental health care into primary care. How can we make mental health services more accessible and routine when there’s such a shortage of trained professionals who take insurance?

A. Psychiatrists may not be the only providers who are key, it could be social workers and psychologists too. The best places today are beginning to focus on this. I see two big areas of reform. First, concentrate on people with big physical conditions. Coordinate their care, whether it’s a visiting nurse, hospital at home or something else. That will be the big wave until the end of the decade. Once you flip out of that, what’s the next big area? You realize it’s mental health. People are going to begin working on that in the next six to 10 years. It’s been a high-cost element and an area that we haven’t paid a lot of attention to, where mental health is integrated into the whole quality of care.

Q. What haven’t I asked you about your book that you think is worth mentioning?

A. You haven’t asked me about the Republicans who were in favor of health reform, like Richard Nixon and Earl Warren. It’s sad how far we’ve come. You’ve got a market-friendly approach to health reform, a private one that Republicans ought to be able to support. That’s a very bad commentary on our political moment. I desperately wish we could fix the ACA. In Massachusetts after reform passed, in the first year alone there were several bills passed to fix it.  We just can’t do that and I think that’s a big mistake.

Emanuel: Although ‘Not A Perfect Law,’ ACA Is Protecting Patients