A recent study out of Oregon suggests emergency medical responders — EMTs and paramedics — may be treating minority patients differently from the way they treat white patients.

Specifically, the scientists found that black patients in their study were 40 percent less likely to get pain medication than their white peers.

Jamie Kennel, head of emergency medical services programs at Oregon Health and Science University and the Oregon Institute of Technology, led the research, which was presented in December at the Institute for Healthcare Improvement Scientific Symposium in Orlando, Fla.

The researchers received a grant to produce the internal report for the Oregon Emergency Medical Services department and the Oregon Office of Rural Health.

Outright discrimination by paramedics is rare, the researchers say, and illegal; in these cases, unconscious bias may be at work.

A few years ago, Leslie Gregory was one of a very few black female emergency medical technicians working in Lenawee County, Mich. She said the study’s findings ring true based on her experience.

She remembered one particular call — the patient was down and in pain. As the EMTs arrived at the scene, Gregory could see the patient was black. And that’s when one of her colleagues groaned.

“I think it was something like: ‘Oh, my God. Here we go again,'” Gregory said. She worried — then, as now — that because the patient was black, her colleague assumed he was acting out to get pain medication.

“I am absolutely sure this was unconscious,” added Gregory, who now lives and works in Portland, Ore., where she founded a nonprofit to spread awareness about racial disparities in health care. “At the time, I remember, it increased my stress as we rode up on this person. Because I thought, ‘Now am I going to have to fight my colleague for more pain medication, should that arise?'” 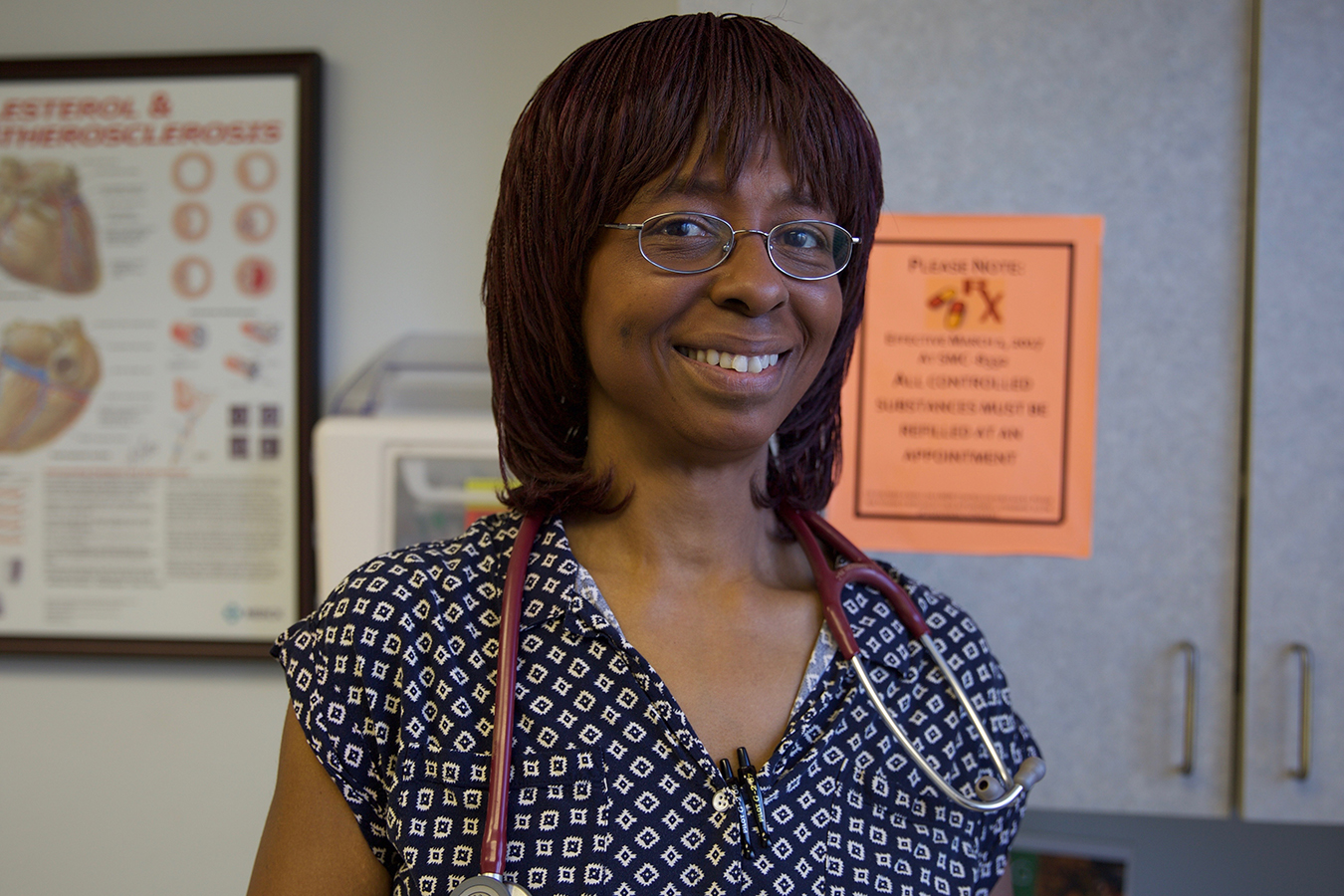 Leslie Gregory, a Portland physician assistant, asks, “How can a person of color not disrespect a system that is constantly studying and talking about these disparities, but does nothing to fix it?” She wants the CDC to declare the effects of racism a national health crisis.(Kristian Foden-Vencil/Oregon Public Broadcasting)

Unconscious bias can be subtle — but, as this new report shows, it may be one of the factors behind race-linked health disparities seen across the U.S.

The study looked at 104,000 medical charts of ambulance patients from 2015 to 2017. It found that minority patients were less likely to receive morphine and other pain medication compared with white patients — regardless of socioeconomic factors, such as health insurance status.

During a shift change at American Medical Response headquarters in Portland,  EMTs and paramedics discussed the issue with a reporter as they got their rigs ready for the next shift.

Jennifer Sanders, who has been a paramedic for 30 years, was adamant that her work is not affected by race.

Most of the emergency responders interviewed, including Jason Dahlke, said race doesn’t affect the treatment they give. But Dahlke also said he and some of his co-workers are thinking deeply about unconscious bias.

“Historically it’s the way this country has been,” Dahlke said. “In the beginning, we had slavery and Jim Crow and redlining — and all of that stuff you can get lost in on a large, macro scale. Yeah. It’s there.” 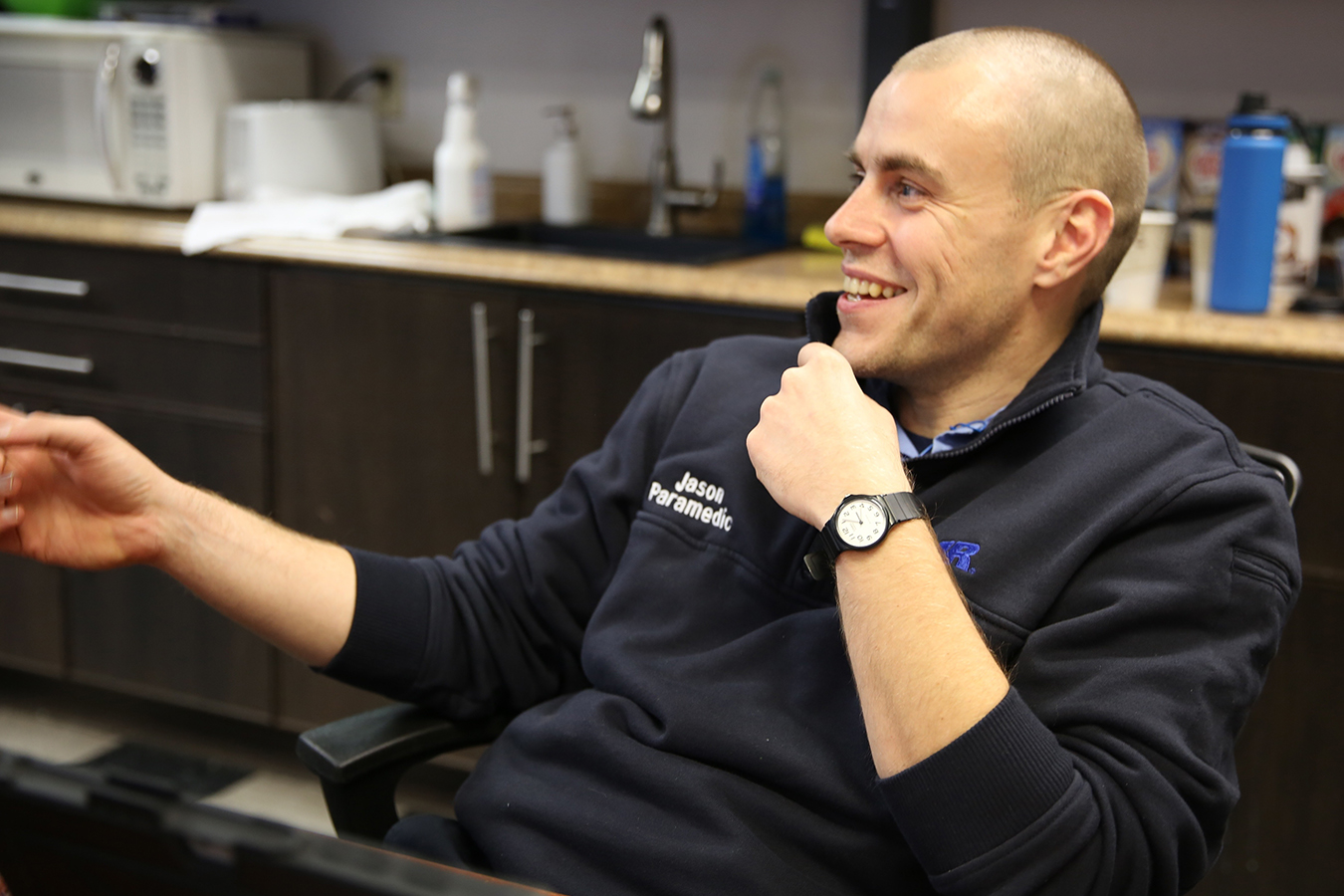 Paramedic Jason Dahlke says he can see how unconscious bias could slip into an emergency responder’s decisions and taint health care. He’s worked hard to be aware of it, in hopes of preventing those disparities in care.(Kristian Foden-Vencil/Oregon Public Broadcasting)

Asked where he thinks unconscious bias could slip in, Dahlke talked about a patient he just treated.

The man was black and around 60 years old. Dahlke is white and in his 30s. The patient has diabetes and called 911 from home, complaining of extreme pain in his hands and feet.

When Dahlke arrived at the patient’s house, he followed standard procedure and gave the patient a blood glucose test. The results showed that the man’s blood sugar level was low.

“So it’s my decision to treat this blood sugar first. Make sure that number comes up,” Dahlke said.

He gave the patient glucose — but no pain medicine.

Dahlke said he did not address the man’s pain in this case because by the time he had stabilized the patient they had arrived at the hospital — where it was the responsibility of the emergency department staff to take over.

Dahlke said he is not sure whether, if the patient had been white, he would have administered pain medicine, though he doesn’t think so.

“Is it something that I think about when I come across a patient that does not look like me? I don’t know that it changes my treatment,” he said

Asked whether treatment disparities might sometimes be a result of white people being more likely to ask for more medications, Dahlke smiled.

Research has found African-Americans more likely to be deeply distrustful of the medical community, and that might play a role in diminished care, too. Such distrust is understandable and goes back generations, said Gregory.

“How can a person of color not disrespect a system that is constantly studying and talking about these disparities, but does nothing to fix it?” she asked.

Gregory wrote an open letter to the Centers for Disease Control and Prevention in 2015, asking it to declare racism a threat to public health.

Past declarations of crisis — such as those focusing attention on problems such as smoking or HIV — have had significant results, Gregory noted.

But the CDC told Gregory, in its emailed response, that while it supports government policies to combat racial discrimination and acknowledges the role of racism in health disparities, “racism and racial discrimination in health is a societal issue as well as a public health one, and one that requires a broad-based societal strategy to effectively dismantle racism and its negative impacts in the U.S.”

Kennel said false stereotypes about race-based differences in physiology that date to slavery also play a role in health care disparities. For example, despite a lack of any supporting science, some medical professionals still think the blood of African-Americans coagulates faster, Kennel said, citing a recent study of medical students at the University of Virginia.

Another question in the survey asked the students whether they thought African-Americans have fewer pain receptors than whites. “An uncomfortably large percentage of medical students said, ‘Yes, that’s true,'” said Kennel.

On top of that, he said, EMTs and paramedics often work in time-pressured situations, where they are limited to ambiguous clinical information and scarce resources. “In these situations, providers are much more likely to default to making decisions [based] on stereotypes,” he said.

Disparities in health care are well-documented. Whites tend to get better care and experience better outcomes, whether they’re in a doctor’s office or the ER. But before Kennel’s study, nobody knew whether the same was true in the back of an ambulance.

And they nearly didn’t get to know, because the research required ambulance companies to release highly sensitive data.

“We were prepared to maybe not look that great,” said Robert McDonald, the operations manager at American Medical Response in Portland. AMR is one of the nation’s largest ambulance organizations, and it shared its data from more than 100,000 charts with Kennel.

Some people chalk up the disparities he found to differences in demography and health insurance status, but Kennel said he controlled for those variables.

So now that AMR knows about disparities in its care, what can the company do?

“My feeling is we’re probably going to put some education and training out to our folks in the field,” McDonald said.

In addition, he said, AMR is going to hire more people of color.

“We want to see more ethnicities represented in EMS — which has historically been a white, male-dominated workforce,” McDonald said.

AMR’s policies must change, too, he added. The company has purchased software that will enable patients to read medical permission forms in any of 17 different languages. And the firm is planning an outreach effort to communities of color to explain the role of EMS workers.