Lance Shnider is confident Obamacare regulators knew exactly what they were doing when they created an online calculator that gives a green light to new employer coverage without hospital benefits.

“There’s not a glitch in this system,” said Shnider, president of Voluntary Benefits Agency, an Ohio firm working with some 100 employers to implement such plans. “This is the way the calculator was designed.”

Timothy Jost is pretty sure the whole thing was a mistake.

“There’s got to be a problem with the calculator,” said Jost, a law professor at Washington and Lee University and health-benefits authority. Letting employers avoid health-law penalties by offering plans without hospital benefits “is certainly not what Congress intended,” he said. 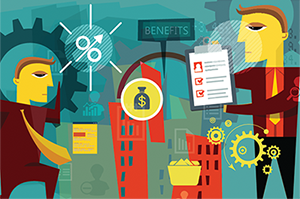 As companies prepare to offer medical coverage for 2015, debate has grown over government software that critics say can trap workers in inadequate plans while barring them from subsidies to buy fuller coverage on their own.

At the center of contention is the calculator — an online spreadsheet to certify whether plans meet the Affordable Care Act’s toughest standard for large employers, the “minimum value” test for adequate benefits.

The software is used by large, self-insured employers that pay their own medical claims but often outsource the plan design and administration. Offering a calculator-certified plan shields employers from penalties of up to $3,120 per worker next year.

Many insurance professionals were surprised to learn from a recent Kaiser Health News story that the calculator approves plans lacking hospital benefits and that numerous large, low-wage employers are considering them.

Although insurance sold to individuals and small businesses through the health law’s marketplaces is required to include expensive hospital benefits, plans from large, self-insured employers are not.

Many policy experts, however, believed it would be impossible for coverage without hospitalization to pass the minimum-value standard, which requires insurance to pay for at least 60 percent of the expected costs of a typical plan.

And because calculator-approved coverage at work bars people from buying subsidized policies in the marketplaces that do offer hospital benefits, consumer advocates see such plans as doubly flawed.

Kaiser Health News asked the Obama administration multiple times to respond to criticism that the calculator is inaccurate, but no one would comment.

Calculator-tested plans lacking hospital benefits can cost half the price of similar coverage that includes them.

While they don’t include inpatient care, the plans offer rich coverage of doctor visits, drugs and even emergency-room treatment with low out-of-pocket costs.

Who will offer such insurance? Large, well-paying employers that have traditionally covered hospitalization are likely to keep doing so, said industry representatives.

“My members all had high-quality plans before the ACA came into existence, and they have these plans for a reason, which is recruitment and retention,” said Gretchen Young, a senior vice president at the ERISA Industry Committee, which represents very large employers such as those in the Fortune 200.  “And you’re not going to get very far with employees if you don’t cover hospitalization.”

But companies that haven’t offered substantial medical coverage in the past — and that will be penalized next year for the first time if they don’t meet health-law standards — are very interested, benefits advisors say.

They include retailers, hoteliers, restaurants and other businesses with high worker turnover and lower pay. Temporary staffing agencies are especially keen on calculator-tested plans with no hospital coverage.

“We’ve got many dozens of staffing-firm clients,” said Alden Bianchi, a benefits lawyer with Mintz Levin in Boston. “All of them are using these things.”

Benefits administrators offering the insurance say it makes sense not only for employers trying to comply with the law at low cost but for workers who typically have had little if any job-based health insurance.

“This is a stepping-stone to bring in employers who have never [offered] coverage and now they’re willing to come forward and do something,” said Bruce Flunker, president of Wisconsin-based EBSO, a benefits firm.

The plans are an upgrade for many workers at retailers, staffing agencies and similar companies, he said.

“OK, if I go to the hospital I don’t have coverage,” he said. “But I don’t have [hospital] coverage now. And what I get is a doctor. I can go to a specialist. I get a script filled at the pharmacy. I get real-life coverage.”

Companies considering such plans include a restaurant chain with 1,000 workers, a trucking firm with 500 employees and dependents, a delicatessen, a fur farm and firms working the oil boom in upper Midwest, Flunker said.

Employer interest in the plans “is definitely picking up pretty quickly,” said Kevin Schlotman, director of benefits at Benovation, an Ohio firm that designs and administers health coverage. “These are organizations that are facing a significant increase in expenses. They’re trying to do their best.”

Because hospital admissions are rare, plans paying for routine care are more valuable to low-wage workers than coverage of expensive surgery and other inpatient costs, say consultants offering them.

Such plans come with deductibles as low as zero for doctor visits and prescriptions and co-pays of only a few dollars, they say. Emergency-room visits cost members in the $250 or $400 range, depending on the plan.

By contrast, health-law-approved insurance with inpatient benefits often includes deductibles — what members pay for all kinds of care before the insurance kicks in — of $6,000 or more.

Generous coverage of routine care is “what these people want,” said Shnider. “They want to be able to go to the doctor. Take care of their kids, go to the emergency room.”

In some cases, employers sponsoring calculator-approved plans without hospital coverage also offer “fixed indemnity” coverage that does pay some hospital reimbursement, advisors say. But the benefits are typically a small fraction of hospital costs, leaving members with the likelihood of large bills if they are admitted.

Concerned for their reputations, larger administrators are wary of managing benefits without hospitalization, even if they do pass the calculator.

“Our self-funded customers hand out insurance cards to their employees with Blue Cross all over it,” said Michael Bertaut, health care economist at BlueCross BlueShield of Louisiana, which has no plans to handle such coverage. “Do we really want someone to present that card at a hospital and get turned away?”

There are two health-law coverage standards that large employers must meet to avoid paying a penalty.

One, for “minimum essential coverage,” merely requires some kind of employer medical plan, no matter how thin, with a potential penalty next year of up to $2,080 per worker. Many low-wage employers are meeting that target with “skinny” plans that cover preventive care and not much else, say brokers and consultants.

The calculator tests the health law’s second, more exacting standard — to offer a “minimum value” plan at affordable cost to workers. Failure to do so triggers the second penalty, of up to $3,120 per worker.

The argument over the calculator is whether plans carving out such a large chunk of benefits — hospitalization — can mathematically cover 60 percent of expected costs of a standard plan.

They probably can’t, Jost said. The fact that the calculator gives similar, passing scores to plans with hospital benefits and plans costing half as much without hospital benefits suggests that it’s flawed, he said. Plans with similar scores should have similar costs, he said.

On the other hand, others ask, why did the administration make a calculator that allows designers to leave out inpatient coverage? Why didn’t the law and regulations require hospital coverage for self-insured employers — as they do for commercial plans sold through online marketplaces?

“The law and calculator were purposely designed as they are!” Fred Hunt, past president of the Society of Professional Benefit Administrators, said in an email widely circulated among insurance pros. “No ‘glitch’ or unintended loophole.”

“That’s baloney,” said Robert Laszewski, a consultant to large insurers and a critic of the health law. “Nobody said we’re going to have health plans out there that don’t cover hospitalization. That was never the intention… I think they just screwed up.”

Debate Grows Over Employer Plans With No Hospital Benefits