St. Paul, Minn. — A loophole in the federal health care overhaul could allow employers to game the system by getting their sicker employees to opt into buying coverage on the health insurance exchanges, according to two University of Minnesota law professors. 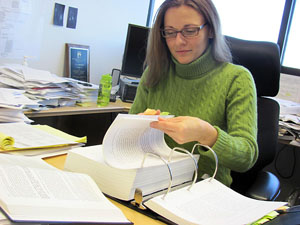 They say the loophole could have dire consequences for the financial health of the exchanges, which are a key part of President Barack Obama’s health care law. The online marketplaces are intended to make it easier to comparison shop for health plans and also to expand access to coverage for the uninsured.

One of the key questions in the health care overhaul is whether this new option for securing health coverage will convince employers to stop offering insurance altogether, knowing employees can resort to the exchanges.

“We didn’t think it would be as simple as that,” said Amy Monahan, a U of M expert on health law.

Monahan and her colleague Dan Schwarcz, an expert on insurance regulation, tried to anticipate how companies would respond to the law given the harsh economic environment and soaring health insurance costs.

They discovered the law gives many large employers an opportunity to squeeze the most expensive workers out of their health plans. The loophole applies to companies that self-insure; that is, design and cover the cost of their own plans. Those companies account for six in ten workers who get insurance through work.

Monahan doubts that many large companies would stop insuring their employees entirely because they’d face a penalty under the health care law.

But self-insured employers “can exclude things and essentially structure their plans to be attractive to low-risk, healthy employees and not attractive to people who are going to have significant health needs,” Monahan said.

She said self-insured employers could design coverage that would discourage sicker workers from remaining on the company plan and make it more attractive for them to seek coverage through the public insurance exchange.

Monahan and Schwarcz said there are several approaches companies could use to encourage higher-cost workers to voluntarily leave the employer’s plan:

Carolyn Pare, president of the Minnesota Buyers Health Care Action Group, doubts that large employers would engage in what the professors termed “target dumping” of their sicker workers.

Pare represents about 40 businesses; about half are large employers based in the Twin Cities, such as 3M, General Mills, and Medtronic.

She said companies must balance their financial bottom lines against the cost of harming their reputations. And from a public relations perspective, dumping workers is a bad idea.

“I don’t see the financial benefit to just dumping your sicker patients into a public program or a health insurance exchange,” Pare said. “And I really don’t see the savings as great enough to incent them to do that.”

But one benefits consultant does. Dave Delahanty at Towers Watson in Chicago said businesses have watched their health care costs soar year after year. Employers might pursue such strategies because it’s so important to rein in health care costs, he said.

“Employers would prefer to think of it as ‘maximizing their health care spend,’ not trying to dump their bad risks on the market,” Delahanty said. “But they are trying to take their health care dollars and spend them as wisely as they possibly can.”

Health law expert Amy Monahan said there are several solutions — the simplest among them is to follow the lead of Massachusetts, where workers who have access to employer insurance are not eligible for policies on the state exchange.

Study: Big Employers Could Dump Sickest Employees On To Exchanges