Premiums for job-based medical insurance rose moderately — 4 percent in 2015 — but employers continued to shift in expenses to workers, according to a new survey.

The average premium for single coverage rose to $6,251 while the average premium for a family plan increased to $17,545, according to a survey published Tuesday by the Kaiser Family Foundation and the Health Research & Educational Trust. (Kaiser Health News is an editorially independent program of the foundation.)

But deductibles — what plan members pay for care before the insurance kicks in — have been rising substantially faster than total health costs.

“The so-called great slowdown in health care costs has been all but invisible to consumers because deductibles have been going up so much faster than their wages,” said Drew Altman, KFF’s CEO. 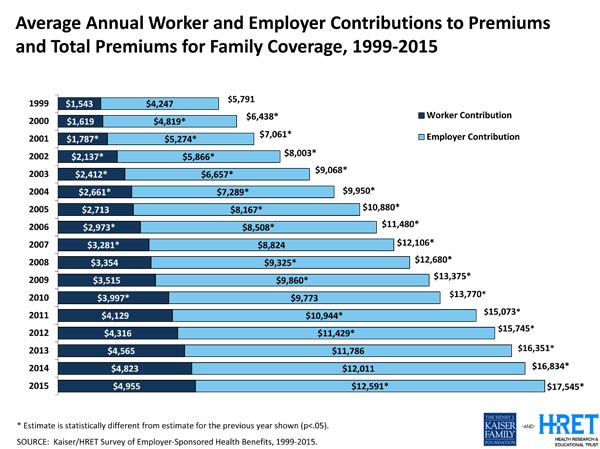 The average dollar amount of deductibles for individual plans has risen by two-thirds since 2010 while premiums have risen by only a fourth, the survey shows. Worker earnings, meanwhile, rose by 10 percent, only slightly more than overall price inflation.

Other findings from the survey of nearly 2,000 large and small employers:

— In the face of measures from the 2010 health law that took effect this year to encourage coverage, some employers expanded insurance while a small percentage shifted jobs to part-time to avoid the obligation to offer a plan.

— One in five companies with at least 200 employees expects its most popular plan to be liable for the “Cadillac tax” on high-value coverage that takes effect in 2018. Employer efforts to avoid the tax will probably shift new costs to workers, analysts said.

— It’s not only workers’ deductibles that are rising. The portion of premiums they pay has gone up, too. Employee premium costs have increased 83 percent since 2005 while the total cost of a policy went up 61 percent.

While national medical expenses have ticked up thanks to the health law’s coverage expansion, some expect costs for employer-based coverage to continue to grow more slowly than in the past. In 2014, employer premiums grew by only 3 percent, one of the lowest increases since KFF started surveying employers in 1999.

“The moderation story continues,” said Paul Hughes-Cromwick, a health economist at the Altarum Institute, which was not involved in the survey. “Premiums for employer coverage are growing slightly faster than expected,” he said, but “given what’s happened to prescription drugs, it’s not surprising.”

Cost-growth for pharmaceutical drugs has accelerated recently with the approval of high-cost medications for hepatitis C, cancer and other ailments.

This year was the first time employers with at least 100 workers had to offer a minimum level of affordable coverage to full-time staff or pay a penalty. (Next year companies with 50 or more employees fall under the mandate.)

A fifth of firms with at least 100 employees extended eligibility to some who weren’t eligible previously. Five percent said they expanded benefits to workers who were previously eligible for only limited medical benefits.

Ten percent of companies with 50 or more workers changed some jobs from part-time to full-time to make employees eligible for a plan.

On the other hand, 4 percent of companies switched some jobs to part-time to avoid the obligation to provide insurance. Four percent also said they reduced the number of full-time workers in their hiring plans because of the cost of health insurance.

The Cadillac tax is intended to nudge employers to trim their most generous plans, which economists believe encourage overuse of the health system. Congressional lawmakers of both parties are talking about repealing it before it takes effect.

But employers aren’t waiting for that to happen. More than half with 200 or more workers have analyzed their plans to see if they would trigger the tax. The answer was yes for almost a fifth.

Health costs have grown faster than the rest of the economy for decades, pressing workers and employers alike, but they slowed substantially after the 2008 financial crisis.

Analysts expect premiums for employer coverage to accelerate as the economy improves. But few forecast a return to the 11 percent average annual growth from 1999 to 2005.

Ultimately, that will be good news for employers and employees alike.

“It’s predictable that we’ll begin to see sharper increases in premiums and health care spending in coming years, but highly unlikely that we’ll see a return to double-digit or even high single-digit increases like we’ve seen in the past,” Altman said.