The open enrollment period begins in one week for 2018 marketplace coverage, but many consumers are confused about what to expect. No wonder!

The Trump administration has slashed advertising and outreach about open enrollment, so concrete consumer information is sparse. But there’s more than enough political rhetoric to make up for it, with regular partisan pronouncements that the marketplaces have collapsed and Obamacare is dead.

Further muddying the waters on 2018 coverage was the Trump administration’s decision this month to cut off government payments to fund subsidies some marketplace customers receive to reduce their out-of-pocket costs, and a subsequent congressional proposal to restore them.

Though details may change if Congress makes a move, here is key information that consumers can probably bank on. (“Probably,” because in this shifting environment, nothing is certain.)

Shopping for health insurance is about as entertaining as picking dryer lint off your clothes, but this year it’s essential to sit down at your computer or work in person with a navigator (if you can find one; federal funding for these health insurance helpers has been trimmed, too) and review the plans offered in your area.

It’s always important to check your plan details to see if the costs, benefits or providers have changed and compare them to other plans. This year, failing to do so could mean you’ll miss out on significant opportunities to get more bang for your premium buck.

Because of a wrinkle in premium pricing this year, some consumers may be able to buy gold plans, one of the most comprehensive offered on the marketplaces, for a lower premium than that of a less generous silver plan. For the same reason, consumers who buy a bronze plan, whose coverage is less generous than a silver plan, may owe no premium at all.

The health law provides two types of subsidies to help lower-income consumers buying coverage on the marketplace. Cost-sharing reduction (CSR) subsidies are paid by the federal government to insurers to shrink deductibles and copayments for people with incomes up to 250 percent of the federal poverty level (about $30,000 for one person) but only if they buy a silver plan.

Also, people with incomes up to 400 percent of poverty (about $48,000 for an individual) can qualify for tax credits to help pay for premiums. The amount of the premium subsidy is based on their income and the cost of a low-priced silver plan.

Earlier this month, President Donald Trump cut off those federal payments to insurers. Senators have introduced a bipartisan bill that would restore the payments, among other things, but its likelihood of passage is unclear.

Recognizing that they might be on the hook financially if the administration cut off payments, many insurers already incorporated the cost of those subsidies into their premiums for 2018 marketplace plans. Further, on their own or at the direction of state insurance regulators, many insurers limited the CSR price increases to the silver plans to which the premium subsidies are tied.

Even though premium tax credits are set according to a silver plan, they can be used for any plan. So, shoppers who qualify for those subsidies may find that while silver plan premiums are relatively expensive this year, bronze and gold plans are relatively cheap, because consumers’ larger premium tax credits will make those plans more affordable.

“Premiums for silver plans are higher, but not for gold or bronze,” said Caroline Pearson, a senior vice president at Avalere Health, a consulting firm. “Premiums for gold and bronze plans are unusually cheap, so they might be a better value.”

To illustrate the pricing anomaly, the Kaiser Family Foundation used the example of a 30-year-old consumer in Sacramento, Calif., who receives a $295 monthly premium tax credit. After applying the tax credit, he would pay $130 for a silver plan with a $425 premium. But he would pay less, just $114, for a more generous gold plan with a $409 premium. (Kaiser Health News is an editorially independent program of the foundation.) 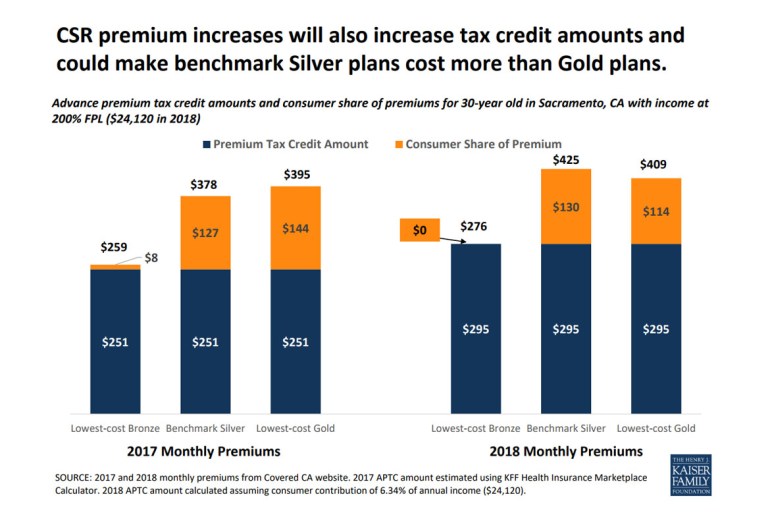 In addition, people who don’t qualify for subsidies may find better deals off the marketplace this year, experts said, depending on whether the state encouraged insurers to load the CSR increases into only marketplace plans.

If you don’t take that step to review plans and update your income and other personal information, your insurer or the marketplace may automatically re-enroll you in your 2017 plan or another one that is similar in price and coverage. About two-thirds of people surveyed by the Kaiser Family Foundation earlier this fall said they would like to stick with the same plan if it’s available.

That may seem like a simple solution, but remember: If premiums have changed, it could affect how much you owe, and a new plan may have different benefits or a different network of doctors, hospitals and other providers. You need to check out your options.

If you live in a state that uses the federal marketplace, open enrollment ends Dec. 15, about six weeks earlier than last year. That reality coupled with the fact that in-person help will be tougher to find means that people should start looking into plans sooner rather than later. States that run their own marketplaces may allow consumers to enroll through the end of January.

“Don’t wait,” said Sarah Lueck, a senior policy analyst at the Center on Budget and Policy Priorities. Her advice for consumers: “Go and look as soon as you can.”

However, some consumers who miss the Dec. 15 enrollment deadline may have another shot at signing up, experts say. If your current plan is being discontinued, you may qualify for a special enrollment period (SEP) because it’s considered a loss of coverage, said Sandy Ahn, an associate research professor at Georgetown University’s Center on Health Insurance Reforms. Consumers in that situation have 60 days after their coverage ends on Dec. 31 to enroll in a new plan.

“If you didn’t know that open enrollment was cut short this year, you might need that SEP,” Ahn said. Consumers should hang on to their insurer letter that tells them they’re losing their coverage under their current plan to document their eligibility.

The Centers for Medicare & Medicaid Services didn’t respond for a request for comment about the eligibility for a SEP in these circumstances.

Enrollment News To Bank On: Obamacare Is Still Here So It’s Time For Coverage Checkup