Amid growing signs that health care overhaul legislation will do little to “bend the cost curve” in the coming decade, lawmakers and administration officials are considering tougher steps to rein in costly entitlement programs and address mounting concerns about soaring deficits.

One approach attracting widespread attention calls for the creation of a bipartisan commission to draft proposals to control the long-term costs of Medicare, Medicaid and Social Security. Together, the three programs account for 40 percent of all federal spending, other than interest on the debt.

The recommendations of the proposed commission would command a swift up or down vote by Congress. Senate Budget Committee Chairman Kent Conrad, D-N.D., and Republican Sen. Judd Gregg of New Hampshire, the chief authors of the proposal, say they may attempt to attach it to must-pass legislation raising the government’s debt ceiling in the coming weeks.

“My concern is the trajectory of our deficits and debt are completely unsustainable and that [while] health care reform helps, it is not sufficient” to control runaway entitlement spending, Conrad said in an interview. “We’ve got to do much more, and I don’t believe it will happen in the regular order. I think it requires a special process.”

The Obama administration signaled earlier this month that the fiscal 2011 budget now being drafted would include program cuts that would help to control the deficit and “put our country back on firm fiscal footing.”

Monday, Christina D. Romer, chair of the president’s Council of Economic Advisers, said the White House was interested in the Conrad-Gregg proposal and other ideas floated by Sen. Evan Bayh, D-Ind., to create an entitlement commission next year, despite some past disappointments in such panels. But for now, she said, the administration’s primary focus is on passing a health care overhaul bill to extend coverage to millions of uninsured Americans – a plan that is estimated to cost about $900 billion over 10 years – and to begin imposing discipline on health care costs and expenditures.

“That’s the most constructive thing we can do to deal with the long-run budget deficit,” Romer told reporters after a speech before the Center for American Progress. “What we’re going to need besides that going forward, there certainly is the Conrad-Gregg Commission idea. We saw Senator Bayh mention something along the same lines, which is [that] Congress could at some point get its act together and work with the president and come up with a proposal.”

The government ended the 2009 fiscal year Sept. 30 with a record $1.4 trillion budget deficit, according to the Treasury and the Office of Management and Budget, and is on track to accumulate deficits totaling $9 trillion by 2019. While administration spending in response to the recession and financial meltdown helped drive up the fiscal 2009 deficit, most of the future problems will be due to rapid rises in entitlement spending on Medicare and Social Security for seniors and Medicaid for the poor and disabled.

“Some of this is just the result of the aging of the population, but the far greater source is the fact that health care costs, both public and private, are rising much faster than” the gross domestic product (GDP), Romer said in her speech. “It is simply not a problem that can be kicked down the road indefinitely.” 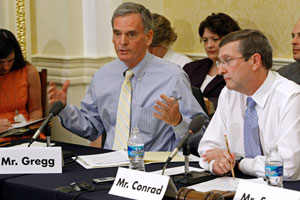 U.S. public and private health expenditures are expected to reach $2.5 trillion this year and account for 17.6 percent of the GDP, according to an analysis by the National Coalition on Health Care, a nonpartisan group. By 2018, national health care expenditures are projected to soar to $4.4 trillion.

National health care spending will increase faster than the growth in the nation’s economy. Between now and 2018, the average increase in national health expenditures is projected at 6.2 percent a year, compared to a 4.1 percent annual rise in GDP, according to the health care coalition study.

The idea of creating a bipartisan entitlement commission has been discussed, off and on, for two years. But it began to attract the interest of the White House, some Democratic leaders and Senate Minority Leader Mitch McConnell, R-Ky., after angry comments at a series of town meetings in August and subsequent polling signaled growing public alarm over the Democrats’ efforts to pass costly health care legislation in the face of a budget deficit level not seen since World War II.

Obama administration officials have vigorously defended the massive government spending over the past year to bail out Wall Street and stimulate the economy as a necessary response to the worst recession since the Great Depression. And they have argued that the health care legislation would not add to the deficit but would take the first essential steps toward slowing the rate of growth of health care spending, or “bending the cost curve.”

The Senate Finance Committee, for example, identified $404 billion worth of savings in Medicare and Medicaid over the coming decade; provided funding for comparative effectiveness research, electronic medical record keeping, and preventative medicine practices to help slow the growth of health care spending. And it proposed the creation of an independent Medicare advisory committee to recommend savings measures to Congress.

But Congressional Budget Office analysts and many health care experts have discounted the efficacy of those approaches in slowing the rate of spending. They warn that, with a fast growing population of elderly citizens making more demands on federal health care programs, spending on Medicare and Medicaid will exceed the entire Defense budget by 2019, regardless of what Congress does this year with health care reform.

Sen. Gregg, the ranking Republican on the Budget Committee, said the Democrats’ health care reform proposals, designed to extend coverage to millions of uninsured Americans, “creates a brand new entitlement without at the same time controlling the cost and expenditures of existing entitlements,” such as Medicare, Medicaid and CHIP, the Children’s Health Insurance Program. He and Conrad contend that Congress must take a much more aggressive approach to containing health care costs.

‘Jump off the political cliff together’

The proposed Bipartisan Task Force for Responsible Fiscal Action would operate in a manner similar to the successful Defense Base Closure and Realignment Commission (BRAC) since their recommendations would not be subject to congressional amendments, Gregg said. And because a three-fifths supermajority would be required in both chambers to adopt the recommendations, the two political parties would have to work in harmony to address the politically charged subject of entitlement reform.

“That’s why we structured it this way,” Gregg said. “The simple fact is that these are the types of issues which require people to join hands and jump off the political cliff together, or else it doesn’t get done.”

Bayh, a centrist, was one of nine Democrats who wrote to Senate Majority Leader Harry Reid, D-Nev., last week calling on Congress to approve a “special process” to control the deficit. Bayh said he would not support an increase in the debt ceiling “unless there’s some mechanism to start getting the deficit under control.”

The national debt — the accumulation of all the past budget deficits– is fast approaching $12 trillion, and the Democratic controlled Congress is contemplating setting the maximum level for government borrowing on the debt at nearly $13 trillion, an all time record.

Entitlement reform commissions have a mixed track record. A bipartisan commission appointed by President Ronald Reagan and House Speaker Thomas P. (Tip) O’Neill Jr. of Massachusetts in 1983 succeeded in extending the Social Security trust fund’s solvency for several generations by raising the retirement age from 65 to 67, imposing a six-month delay in a cost of living adjustment and requiring government employees to pay into Social Security for the first time.

There was a bipartisan political consensus at the time that something had to be done to save Social Security, which was on the brink of insolvency. By contrast, there was no consensus about what to do to address the long term budgetary challenges of providing health care and retirement benefits to the baby-boom generation when former senators Bob Kerrey, D-Neb., and John C. Danforth, R-Mo., headed up the Commission on Entitlement and Tax Reform in 1994, during the Clinton administration.

Kerrey and Danforth floated a plan including cuts in Social Security checks for future retirees, an increase in the retirement age to 70, a cap on tax breaks for employer-paid health insurance and means-testing for veterans benefits. Kerrey and Danforth could never muster the 60 percent majority they needed from commission members to send their recommendations on to Congress, and their final report was shelved.

Whether the Conrad-Gregg commission approach would fare any better is open to speculation, but experts and lawmakers readily agree that real long-term health care and Social Security cost savings would necessitate highly unpopular measures, such as reducing health care benefits and cost-of-living adjustments, boosting taxes and fees, or, in the case of Social Security, raising the eligibility age even higher or increasing payroll taxes.