Deb Waldin was in pain when she arrived at the emergency room of Fairview Health Services, a nonprofit hospital system in Minnesota. On a scale of 1 to 10, she says she was at 12. 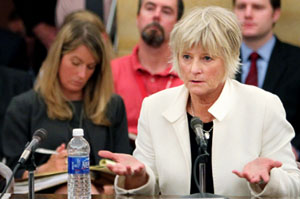 Patient Deb Waldin, right, discusses her experience with debt collection at Fairview Hospital in Minnesota during a hearing led by U.S. Sen. Al Franken in St. Paul, Minn. in May (Photo by Jeffrey Thompson/Minnesota Public Radio).

She turned out to have kidney stones. But before she got the diagnosis, when she was still lying on a gurney, waiting to see a doctor, she was approached by a debt collector from a company called Accretive Health.

“I was in a little ball in the fetal position wishing I could die,” Waldin testified at a recent congressional hearing. “I saw out of the corner of my eye this little guy wheeling a [cart]… I was just having such pain it was hard to process what he was saying, but I do recall he said I had to pay him between $700 and $800.”

On Friday, the U.S. Treasury Department released new proposed rules to protect patients from abusive debt collection practices at nonprofit hospitals. The rules were required by the 2010 federal health law.

In releasing the rules, the Obama administration alluded to stories like Waldin’s, which have come to light in the course of an investigation of Accretive Health launched by the Minnesota attorney general.

“In recent months, we have heard concerns about aggressive hospital debt collection activities, including allowing debt collectors to pursue collections in emergency rooms,” Acting Assistant Secretary for Tax Policy Emily McMahon said in a press release. “These practices jeopardize patient care, and our proposed rules will help ensure they don’t happen in charitable hospitals. These rules also require charitable hospitals to establish and publicize financial assistance policies, and give hospitals the flexibility to establish programs that meet the needs of their communities.”

At the same hearing where Waldin testified, Accretive Senior Vice President Greg Kazarian apologized to patients about such tactics and also said that the company’s actions had been distorted in the investigation. Sen. Al Franken, D-Minn., called the hearing.

“I know that hospitals across the country are being squeezed right now,” Franken said.  “And hospitals deserve to be paid for the services they provide. But especially in this time of economic hardship, we need to make sure that patients aren’t the unintended victims of budget shortfalls.”

“We were excited to see how much and how comprehensive they were,” Curtis said. “Our take home message really is that we need to put more of the onus on hospitals to be better about being fair with patients.”

But the American Hospital Association says the rules are onerous, and place too much of the blame on hospitals.

“Hospitals appear to be held accountable for the activities of the 3rd party debt collectors that they employ,” said Melinda Hatton, the AHA’s general counsel.

Hatton complains that if a hospital makes a mistake in the way they explain their financial assistance policy to patients, the penalty could be enormous.

“You could potentially lose your tax exemption,” Hatton said. “The way the IRS is looking at this, if you’re a hospital system and any one of the hospitals in your system loses their tax exemption as a result of noncompliance, your whole system could lose its tax exemption.”

The new rules are based on a provision in the health law that was championed by Sen. Chuck Grassley, R-Iowa. For years, Grassley has been scrutinizing the finances of nonprofits, including hospitals’ debt collection practices.

But, like all Republican senators, Grassley voted against the Affordable Care Act. The Supreme Court is set to rule on the law Thursday. If the court decides to strike down the entire law, the proposed rules on debt collection at charitable hospitals would disappear along with it.

Elizabeth Stawicki of Minnesota Public Radio contributed to this report.