Complaining of abdominal discomfort and chronic bronchitis, 22-year-old Toshia Johnson, an unemployed mother on Medicaid, went to a hospital emergency room in Bend, Ore., more than two dozen times in the year that ended in June 2010. She was never admitted to the hospital and used the ER for routine care because, she says, it’s near her home and the care was free.

But in the first six months of this year, after entering a state-funded program designed to reduce unnecessary ER use by Medicaid patients in central Oregon, Johnson has gone to the ER just once, after breaking her tailbone. In the first half of this this year, ER visits by the 400 patients in this program have declined by more than half from the same period last year, saving  Medicaid $1 million, officials say.

Efforts to reduce unnecessary ER visits by patients in Medicaid, the joint state-federal health program for the poor and disabled, are proliferating as states search for ways to control the soaring costs of the program. But state officials complain that their efforts are sometimes hampered by hospitals’ aggressive marketing of ERs to increase admissions and profits.

“Many hospitals are actively recruiting people to come to the ER for non-emergency reasons,” said Anthony Keck, South Carolina’s Medicaid director, citing facilities that tout their speedy ER service on highway billboards. “When you are advertising on billboards that your ER wait time is three minutes, you are not advertising to stroke and heart attack victims,” he said.

ER visits totaled 124 million in 2008, an increase of about 31 percent since 1997, according to the Centers for Disease Control and Prevention. The average wait time for treatment is 33 minutes, up from 22 minutes. 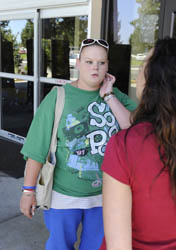 Johnson talks with her outreach worker at St. Charles Hospital in Bend, Ore., in July. (Photo by Greg Wahl-Stephens/AP)

HCA, the nation’s largest for-profit hospital chain, launched a major ER marketing campaign in the past year in Virginia, Florida, Texas and other states. The campaign includes billboards highlighting average ER waiting times and a service that provides waiting times to smartphone users.

Officials at HCA and other hospitals reject the assertion that marketing the efficiency of their ERs attracts patients who don’t belong there. “That is certainly not our intention,” said Mark Foust, a spokesman for HCA’s Virginia division, which owns 12 acute-care hospitals, including Reston Hospital Center and Dominion Hospital in Falls Church. “We’ve seen no evidence that this is driving inappropriate volume to the ER.”

Dallas-based Tenet Healthcare Corp., a large hospital chain some of whose facilities have seen a surge of patients using the ER for primary care, recently began accepting online appointments to make it easier for patients to use the ER. It’s also promoting average waiting times on the Internet and on billboards. Spokeswoman Carol Britton says that there hasn’t been a “significant increase” in ER visits by Medicaid patients as a result of the promotion.

Medicaid officials in Washington state were so concerned by hospitals’ ER marketing that they issued new rules making it harder for hospitals to qualify for Medicaid bonus payments if they promote their ER for primary care. “They sure don’t help us when we are trying to get word out that the ER is not the place you go for primary-care diseases like treating asthma or diabetes,” said Jeffrey Thompson, chief medical officer for the state Medicaid program.

Medicaid recipients visit ERs more often because they are generally sicker than people with private insurance or the uninsured, said Genevieve Kenney, a senior fellow with the Urban Institute. In many parts of the country, people on Medicaid use the ER because they have trouble finding a doctor who accepts Medicaid patients. Medicaid recipients also can use ERs for free or nominal costs.

Saint Agnes Hospital in Baltimore estimates that about 20 percent of its Medicaid and uninsured ER visits in 2008 were for “non-emergent” reasons. Using a $1 million federal grant, the hospital has been working since 2009 to divert patients needing more-routine care to a community health center located on the hospital’s campus. The health center is less costly because it has much lower overhead costs than the hospital, which must be staffed around the clock. Of the nearly 4,000 patients whom the hospital contacted during visits to the ER, about 1,000 later sought care at the clinic at least once.

Joe Meyers, vice president of strategic planning for Saint Agnes, said the program, which ended in June, showed mixed results: Some patients were willing to use the clinic while others could not be convinced. “These are our most difficult patients to redirect, as they use the ER for no cost and it has become their primary-care office,” Meyers said.

While Saint Agnes advertises on its Web site that the urgent- care portion of its ER offers quick treatment of minor ailments such as colds and sore throats, Meyers said that doesn’t drive inappropriate admissions but merely provides a way for the hospital to offer more efficient service. But to avoid clogging its ER, Meyers said, the hospital purposely does not promote its ER as heavily as its competitors push theirs.

Studies vary widely on what percentage of overall ER visits are unnecessary, for Medicaid patients and others.

The research firm Rand found last year that about 17 percent of visits to ERs were unnecessary and added $4.4 billion in annual health-care costs. A 2010 study in Health Affairs found that up to 27 percent of all emergency room visits could take place at urgent-care centers or retail health clinics.

Researchers say it’s difficult to measure whether an ER visit is appropriate. For example, a headache could be a minor problem or an early sign of a stroke.

In Oregon, the state helps connect community health workers with Medicaid patients who repeatedly visit the ER. These “frequent flyers,” as they are called, are patients who use the ER at St. Charles Medical Center in Bend at least 13 times a year.

Robin Henderson, an administrator at St. Charles, said the hospital has no incentive to provide primary care in its ER and wants to help patients get better care for non-urgent needs at a community health center. “I lose 33 cents on the dollar for every Medicaid patient who walks in the ER,” she said.

The ER diversion program in Bend is helping Toshia Johnson get her high school equivalency diploma, search for a job and deal with her mental health issues. At the heart of the program is a community outreach worker who assists participants with getting to medical appointments and addressing other needs.

Johnson is happy the program linked her with a physician she likes and an outreach worker who checks up on her. “I’m getting better care now at a doctor’s office,” she said.