Efforts to enroll Asian Americans in the health law’s marketplace plans have generally been touted as a success, but because coverage details are provided primarily in English or Spanish, those who depend on their native languages have encountered roadblocks as they try to use this new insurance. 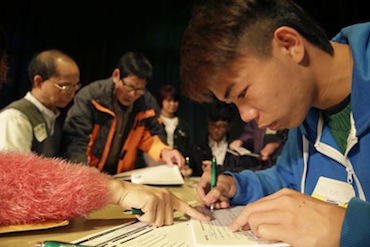 Shuxun Yu, right, 19, of Oakland, was given assistance filling out an application form during a health care enrollment event in March at the Oakland Asian Cultural Center (Photo by Eric Risberg/AP).

About 35 percent of Asian Americans have limited English proficiency, according to a September report from the Center for American Progress, a left-leaning think tank.

The issue of language access gained attention last summer when the Obama administration notified thousands of people that their health insurance subsidies were at risk unless they updated their citizenship documentation because information on their initial applications could not be verified. Advocates said many of those in jeopardy did not speak English well and did not understand the paperwork they received.

This example is not an isolated one.

Asian Americans, with limited English who enrolled in plans with the help of bilingual navigators and in-person assisters, are now trying to understand a slew of documents – things like explanations of benefits packages or notifications about paperwork deadlines – that often are not translated.

Data measuring just how many enrollees have had trouble understanding their insurance material is hard to come by, said Jen Lee, director of community services and partnerships at the Association of Asian Pacific Community Health Organizations. But it’s not uncommon, especially for Asian Americans who seek insurance through a federal or state exchange, she said. “It becomes a huge issue moving forward,” she said.

Last year, Asian Americans generally enrolled in plans at a rate higher than expected. Federal officials have reported that 5.5 percent of those who signed up for marketplace plans were Asian Americans, while they make up just 5.1 percent of the population nationally.

The marketplace will “ask which language do you prefer – and for my clients that language is Korean. But they’re not receiving those notices in Korean,” said Minja Hong, program director at Korean Community Services, a New York-based assister agency.

In one case, she recalled, a Korean-speaking woman called the marketplace to find out why her plan was canceled. She came away from the call believing she had paperwork missing. When Hong followed up, it turned out the woman actually had never paid her premium.

This kind of language barrier could violate Section 1557 of the federal health law, said Priscilla Huang, policy director for the Asian and Pacific Islander American Health Forum. That provision, modeled on the 1964 Civil Rights Act, prohibits barring people from “any health program or activity, any part of which is receiving federal financial assistance, including credits, subsidies, or contracts of insurance” based on race, national origin, sex or ability.

Asian Americans – particularly those less comfortable with English – are often immigrants. For that reason, not providing in-language resources can be construed as discrimination based on national origin, Huang said, and the reference to “contracts of insurance” extends that protection to include private plans being sold on the marketplace. But, she added, the Department of Health and Human Services has not yet issued regulations on how to enforce Section 1557 – making it difficult to interpret or enforce the provision in cases such as these.

Huang, whose organization is in a consortium that advocates on behalf of Asian Americans and Pacific Islanders regarding health issues, said her group has been talking with HHS about having Section 1557 regulations issued before the next round of open enrollment, which starts Nov. 15. So far, though, there’s no timeline as to when that will happen.

“There are good intentions – however, we do want to see more action,” Huang said.

HHS will issue a Notice of Proposed Rulemaking regarding 1557 in coming months, according to the Centers for Medicare and Medicaid Services.

People who believe they have faced discrimination “on one of the bases” the provision protects can file a complaint through the agency’s civil rights webpage. HHS has been investigating complaints it has received, CMS said.

Some civil rights complaints have already been filed by groups that advocate for immigrants, including an Asian American group in Pennsylvania, specifically addressing messages HHS sent out discontinuing coverage. Those complaints assert that the notices didn’t take sufficient measures to warn customers in their native language that they could potentially lose their insurance.

Insurance plans do make an effort to reach consumers and help them use their new plans, said Susan Pisano, vice president of communications at American’s Health Insurance Plans, a lobbying group.

“When I talk to plans, they’re very focused on getting good information to new members – both about what their insurance options are and then also once enrolled, how to use their new benefits,” she said. “They’re paying particular attention to this where the issue of culture or the issue of language comes into play – but they understand that there’s still more work to do.”

Meanwhile, when consumers receive English-language packets, they usually return to the navigators who helped them enroll, Lee said. This fall, those navigators will be working to reach new customers while helping old ones re-enroll in their plans – so having to do translation work on top of that can strain already limited resources, she said.

“Our health centers – they are constantly working with folks who … are already enrolled and have questions,” she said.

Navigators and assisters across the board received less funding this year than last. In states with federally facilitated marketplaces, for instance, HHS awarded $60 million compared to 2013’s $67 million – and many assister programs last year reported working either near or at capacity.

In theory, people looking for help translating their insurance papers can turn to hotlines or the marketplace, Hong said. But, Hong added, those conversations can actually be detrimental. About 85 percent of people she sees are limited in speaking or understanding English.

“It becomes a three-way conversation that is very unwieldy,” she said. “Often the translator is not familiar with the language of insurance, and things get lost in translation.”

“How are they supposed to … understand the next step in accessing care,” Lee said, “if the packets and tools in the marketplace aren’t – for limited English proficiency folks – navigable?”

Even With Insurance, Language Barriers Could Undermine Asian Americans’ Access To Care