With the Nov. 15 kick-off for this year’s health law enrollment season fast approaching, the need for more training for the  people who help consumers navigate the health insurance marketplace is growing increasingly clear. 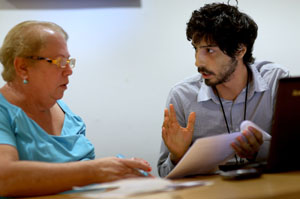 Out of 843 respondents, 41 percent indicated a desire for more training about how to help consumers after they enrolled in health plans. The same proportion wanted more support in addressing “tax filing issues,” according to the report. About 39 percent of respondents indicated the need for further training in distinguishing between qualified health plans. The same figure wanted more training in interpreting how immigration status shaped eligibility.

These numbers do not come as a surprise to people already involved in trying to help consumers use the health law’s online marketplaces.

Programs working with healthcare.gov received training through the federal Centers for Medicare & Medicaid Services, while those handling state exchanges were certified by the individual state. Some states introduced additional qualifications for navigators, such as Georgia, which required that they pass the same exam insurance brokers take.

The federal curriculum required about 20 hours of training, plus online assessments.

Although she called the federal curriculum “comprehensive,” Webb said assisters with whom she worked and communicated last time around had wanted more hands-on preparation before the websites’ initial launch. Instead, assisters ended up having to figure out many of the particulars when they were already in the trenches.

CMS is still developing this year’s training, which, based on current scheduling information, will be available in September. It’s expected to attempt to tackle some of these issues.

The July KFF report indicated that more than 90 percent of assisters had been contacted by consumers after they enrolled in insurance plans, with those consumers seeking additional help.

“We’ve identified the need for some supplemental training for our staff,” Hershkovitz said.

But even with these efforts, Hershkovitz said she imagines assister programs across the country will likely continue identifying new areas in which they could use more help. She doesn’t expect the rate of assistors who want more training to decline.

“Different training topics will likely arise to the top” of assister-identified needs next year, she said. “Continuing education is going to continue to be important.”

In this survey, which was conducted April 24 to May 12, participants were asked to identify topics on which they would like further training, a list that included the option of “no additional topics or issues.” About 8 percent selected that option. The results were published in a July report examining how assister programs worked during the Affordable Care Act’s initial rollout.