CAGUAS, Puerto Rico — Myladis Reyes, 26, fell in love with medicine by accident. She was a sophomore at the University of Puerto Rico studying chemistry seven years ago when she visited her aunt, a clinic internist, in New Jersey and witnessed the difference she made with patients.

“She was always smiling. She always made little jokes,” Reyes said. “I just saw that and I thought, what better way to help?”

The experience showed Reyes a new way to harness her interest in science and directly improve people’s lives. But after a fierce struggle to get into medical school, she foresees challenges in finding hands-on medical training — known as a residency — in Puerto Rico. And because of poor job prospects on the island afterward, she expects her career to steer her far from home.

But many of those graduates are leaving the island for better work opportunities, despite Puerto Rico’s growing and urgent health needs.

In the Residency Match announced in March — where students learn where they will continue training — about half of students matched to the mainland, based on figures provided by officials at Puerto Rico’s four medical schools.

That exodus is particularly alarming because the commonwealth’s health care infrastructure is suffering from a shortage of trained physicians.

Physicians opt out of Puerto Rico for many reasons: Nearly 4 in 10 people in the commonwealth are insured through Medicaid managed-care programs, but payments for doctors and hospitals are a third less than the average payments by Medicaid managed-care organizations on the mainland. Most Medicare patients also use the private alternative — Medicare Advantage plans — but their reimbursements are well below mainland rates too.

The low payments are compounded by a $70 billion debt crisis in Puerto Rico. Last summer, Congress established an oversight board charged with saving the island’s economy. Its fiscal plan released in March calls for more cuts to provider reimbursements and fewer benefits for Medicaid enrollees, adding pressure to an economic recession that has helped drive thousands of physicians off the island.

To cauterize the bleeding, Gov. Ricardo Rosselló signed into law a measure that lowers physicians’ income taxes to 4 percent if they complete 180 hours of medically related community service or compensated care to Medicaid patients.

For medical students Reyes and Rafael Cardona, the uncertainty presents a large risk in deciding where to seek their medical residency and become licensed physicians.

As they near the end of their academic training and weigh their options, both are struggling to find a reason to stay. 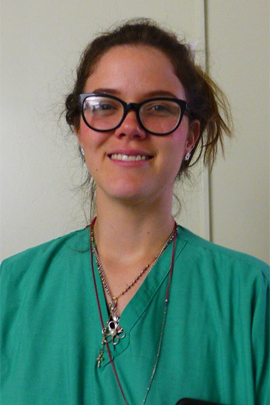 Myladis Reyes, 26, has a clerkship at HIMA San Pablo Hospital in Caguas, Puerto Rico. While curricula in Puerto Rican medical schools resemble those of programs on the mainland, students like Reyes are taught in Spanish and English, making them enticing candidates for residencies overseas. (Carmen Heredia Rodriguez/KHN)((Carmen Heredia Rodriguez/KHN))

It took Reyes four rejections, two schools and a master’s degree to secure her place in med school.

As she finished her undergraduate program in biomedical sciences, Reyes submitted her application to each of the medical schools on the island. Her scores and GPA were lower than average, but she figured her personality during interviews could make up the difference.

She was turned down by each one.

Although the rejection was devastating, Reyes’ mother encouraged her to keep trying.

She threw herself into a master’s program in health administration and finished with a 4.0 GPA. She raised her score on the standardized medical school application test by three points and volunteered at a Veterans Affairs hospital in the emergency room.

With more experience on her résumé and stronger scores, Reyes again applied to three medical schools, submitted more letters of recommendation and visited her preferred university multiple times to make sure they received her submission.

“I literally put [on the application], ‘If I don’t get in this time, don’t think that you won’t hear from me again next year,’” Reyes said.

Several months later, Reyes received a letter from her top choice school: Central Caribbean. She was in.

A Change In Direction 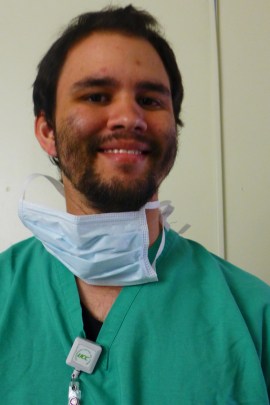 Rafael Cardona, 27, is a third-year medical student at Central Caribbean University, located in Bayamon, Puerto Rico. He wants to specialize in otolaryngology — focused on disorders of the ears, nose and throat — but the island has only one residency program for 10 people in that field. (Carmen Heredia Rodriguez/KHN)

Reyes’ classmate Cardona, 27, had nearly graduated with an electrical engineering degree before realizing he wanted to study medicine.

“I knew that if I wanted to do it, maybe I could,” Cardona said.

He began tailoring his electives toward biology and chemistry classes and picked up several more credits over the summer. The switch ultimately cost him an extra 12 months in college — taking him six years to earn his bachelor’s degree in 2014.

As both Reyes and Cardona fought for a place in medical school, scores of physicians were departing Puerto Rico. From 2009 to 2014, Puerto Rico’s total number of physicians decreased by nearly 2,400, according to the legislation that Rosselló signed in February. In 2014, 365 left. In the same year, only 278 residents completed their training. The following year, 500 doctors left the island, leaving behind only 293 new physicians to fill their void.

The exodus is partly fueled by financial incentives. Doctors working in the mainland earn two to three times more in wages than their colleagues in Puerto Rico. General and family practitioners here earned an average of $82,710 in May 2016. In contrast, the same doctors working in Oklahoma, the state with the lowest average earnings in the nation, earned $155,420.

Now in their third year of medical school, Reyes and Cardona are getting some hands-on experience through clerkships, where students spend several weeks at a hospital working with patients and physicians.

A stint in each specialty culminates in a shelf exam, where students are tested on what they learned in the field. This means the students’ lives revolve around practicing medicine by day and studying by night. Both Reyes and Cardona are up by 5:30 a.m. to be at the hospital by 7. They leave in the afternoon and head back to campus to study until about 11 p.m.

To Go Or Stay?

Reyes and Cardona have already begun to think about their future in medicine and how they will handle their residency applications for next year. They pay attention to the migration of Puerto Rican doctors and both intend to follow suit.

Cardona plans to leave Puerto Rico and go to New York. He wants to specialize in otolaryngology — a specialty focused on the ears, nose and throat — but Puerto Rico maintains only one program in the field. He is hoping to travel to the states next year to make some connections to residencies there. Ideally, Cardona said, he could return to Puerto Rico and re-establish roots.

Reyes said she intends to pursue a residency in the northeastern United States. The move means leaving behind her mother but a better salary to pay her student debt — totaling roughly $200,000 as of this year. With those bills, Reyes said, she cannot afford subpar pay.

“I have a debt to pay. And it’s pretty steep,” Reyes said. “I need to find someone that’s going to pay me” better than the residencies in Puerto Rico.