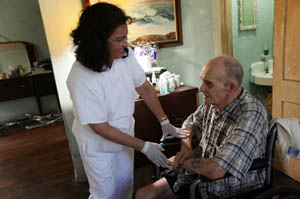 Home health agencies, hospitals and consumer groups are complaining that a new rule intended to curb unnecessary Medicare spending will make it harder for senior citizens to get home care services.

Under the requirement, which takes effect April 1, Medicare beneficiaries will have to see a doctor 90 days before or 30 days after starting home health services in order for the home health agency to get reimbursed. That face-to-face visit may be a burden for some home-bound frail seniors as well as those living in rural areas, the industry says.

But some Medicare experts have little sympathy for industry complaints. “Home health is a benefit that is out of control,” said Dr. Robert Berenson, a health policy expert at the Urban Institute.

Medicare home health care typically consists of services such as skilled nursing, physical therapy and speech therapy. Unlike most services in Medicare, patients don’t pay co-pays or a deductible. The services can be prescribed for 60 days at a time, although there is no limit on the number of times they can be renewed.

Since 2002, Medicare home health costs have doubled to $19 billion in 2009. At the same time, cases of Medicare fraud have been rising and federal officials have launched a crackdown that includes prosecutions of home health agencies that bill for services not provided.

Under current law, a doctor must prescribe home health care for patients to receive services, but the physician doesn’t have to see a patient to make that determination.

Medicare advisers to Congress say the regulation doesn’t go far enough to reduce waste and fraud because it allows patients to start getting home health services before first seeing a doctor to ensure they need it. “Such a large window does not ensure that beneficiaries receive an examination in a timely manner before home health care is delivered,” the Medicare Payment Advisory Commission wrote in a report to Congress this month. Berenson is a member of the commission.

The doctor-visit rule, which was included in the health care overhaul, was initially supposed to take effect Jan. 1 and require providers to see patients within 30 days prior to or two weeks after the start of home care. In December, CMS delayed implementation until April because of complaints from providers who claimed that it was too stringent and that most doctors were unaware of the change. At that time, CMS also announced that it was expanding the timeframe for patients to meet with doctors.

See the letter from several health care groups to CMS on the Physician Face-To-Face Rule:

Now, a coalition of home health industry, hospital and doctor groups and AARP is pushing for another three-month extension. CMS spokesman Tony Salters said the agency is listening to concerns but refused to say whether another extension will be granted. Salters said the agency did not have any data to show what percent of Medicare patients now get home care services without having a recent visit with their doctor.

“There is a lot of confusion out there and patients may lose access to their care,” said Nora Super, an AARP lobbyist.

Dr. Roland Goertz, president of the American Academy of Family Physicians, said the new rule adds documentation requirements for physicians. “It makes our paperwork burden even more onerous,” he said.

Under the new rule, doctors would have to fill out a form certifying that they or another health care provider such as a nurse practitioner had seen a patient for the specific purpose of determining the patient’s need for home care. This would be in addition to doctors’ current duties of prescribing home health care and signing off on a care plan, which is typically developed by the home health agency.

“A home health face to face encounter contradicts the purpose of home health care,” Hoosier Uplands Home Health Care & Hospice in Mitchell, Ind., a rural area about 85 miles south of Indianapolis, wrote CMS last year. “This would impose on the patient the need to leave home for increased, and unnecessary physician visits.”

But the home health agency voluntarily has tried out the new rule over the past three months and found only minor problems, such as doctors not filling out forms correctly, said Melissa Jeremiah, director of operations for Hoosier Uplands.

Yet, Rochelle Archuleta, a policy expert at the American Hospital Association, says her organization is “hearing concerns from providers and that tells us this policy is not ready for enforcement.” Hospitals are concerned that patients who leave the hospital may not be able to get immediate home health services and hospital-owned home health agencies may have trouble complying with the law.

Home health agency groups say they understand Medicare’s need to reduce unnecessary care but the new rules are too onerous. “We want to make sure beneficiaries who really need the services are not denied it,” said Peter Notarstefano, director of home and community based services at Leading Age, which represents nonprofit home health agencies.