Mayra Alvarez, one of four daughters, said her mother makes ends meet in California by cleaning houses during the week and caring for an elderly person on weekends. And when it comes to deciding between paying for a preventive screening test for herself or spending the money on her youngest daughter’s education, she said her mother would always choose the latter. 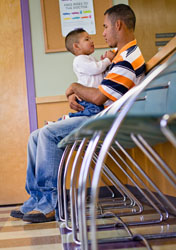 “And I have to say, most American families would,” said Alvarez, the director of public health policy in the Office of Health Reform at the U.S. Department of Health and Human Services.

During a panel discussion Wednesday, she joined Rep. Lucille Roybal-Allard, D-Calif., and other health care experts to speak about  “Diabetes and Obesity In The Latino Community, Reversing The Trend” as part of the Congressional Hispanic Caucus Institute’s public policy conference in Washington, D.C. They said that public health officials need to take into consideration family and community dynamics as they tackle broad health care issues.

About 13 percent of Latinos have diabetes, a rate that is almost double that of non-Hispanic whites, according to a 2010 National Health Interview Survey. The statistics are even worse for the next generation since Latino youth have the fastest growing diabetes rates of any ethnic group.

Panelists reviewed the growing numbers of Latinos with diabetes and obesity, and the barriers to wellness and prevention, including unsafe neighborhoods and the steep cost of care.

“It can also be a cultural issue,” said Cecelia Pozo Fileti, president of Latino Health Communications, describing the various roadblocks to health care.

From overfeeding children to participating in sometimes calorie-laden festivals, she said that family, society and economics should be included in any health movement. Introducing her project, Latino Integrative Nutrition Initiatives, Fileti also said that an educational approach was the only way to change the habits and health of the Latino community.

The panelists also called on community leaders to use government grants to support innovative methods of promoting health. The Prevention and Public Health Fund,  established by the 2010 federal health law, provides funds to states and communities for public health initiatives and to fight disease. The Centers for Disease Control and Prevention also distributes grants for efforts to reduce chronic illness like diabetes.

Alvarez said that a strong relationship between federal government initiatives and local initiatives could be the answer to the costly burden of diabetes and obesity.

“If we work through the communities we can leverage this so that the most vulnerable people in our country will not be left out.”