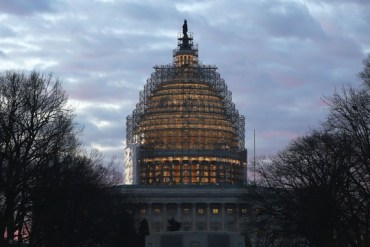 Under the bill, the current reimbursement schedule would be replaced with payment increases for doctors for the next five years as Medicare transitions to a new system focused “on quality, value and accountability.” Existing payment incentive programs would be combined into a new “Merit-Based Incentive Payment System” while other alternative payment models would also be created.

“Passage of this historic legislation finally brings an end to an era of uncertainty for Medicare beneficiaries and their physicians — facilitating the implementation of innovative care models that will improve care quality and lower costs,” said Dr. James L. Madara, chief executive officer of the American Medical Association. “Patients will be able to get the care they need and deserve.”

It now moves to President Barack Obama, who — shortly after the Senate vote — said he would sign the bill, calling it “a milestone for physicians, and for the seniors and people with disabilities who rely on Medicare for their health care needs.”

There’s enough in the wide-ranging measure for both sides to love or hate. “Like any large bill it’s a mixed bag in some respects, but I think on the whole it’s a bill well worth supporting,” Senate Majority Leader Mitch McConnell, R-Ky., said Tuesday.

The bill includes two years of funding for an unrelated program, the Children’s Health Insurance Program, or CHIP. GOP conservatives and Democrats are unhappy that the package isn’t fully paid for, with policy changes governing Medicare beneficiaries and providers paying for only about $70 billion of the approximately $210 billion package. The Congressional Budget Office has said the bill would add $141 billion to the federal deficit.

Consumer and aging organizations also have expressed concerns that beneficiaries will face greater out-of-pocket expenses on top of higher Part B premiums to help finance the way Medicare pays physicians.

But lawmakers said they had struck a good balance in their quest to get rid of the old system. “I think tonight is a milestone for the Medicare program, a lifeline for millions of older people,” said Sen. Ron Wyden, D-Ore. “That’s because tonight the Senate is voting to retire the outdated, inefficiency rewarding, common sense-defying Medicare reimbursement system.”

For doctors, the passage is an end to a familiar but frustrating rite. Lawmakers have invariably deferred the cuts prescribed by a 1997 reimbursement formula, which everyone agreed was broken beyond repair. But the deferrals have always been temporary because Congress has not agreed to offsetting cuts to pay for a permanent fix. In 2010, Congress delayed scheduled cuts five times.

Here are some answers to frequently asked questions about the legislation and the congressional ritual known as the doc fix.

Q: How would the bill change the way Medicare pays doctors?

The House package would scrap the old Medicare physician payment rates, which were set through a formula based on economic growth, known as the “sustainable growth rate” (SGR). Instead, it would give doctors an 0.5 percent bump in each of the next five years as Medicare transitions to a payment system designed to reward physicians based on the quality of care provided, rather than the quantity of procedures performed, as the current payment formula does. That transition follows similar efforts in the federal health law to link Medicare reimbursements to quality metrics.

The measure, which builds upon last year’s legislation from the House Energy and Commerce and Ways and Means committees and the Senate Finance Committee, would encourage better care coordination and chronic care management, ideas that experts have said are needed in the Medicare program. It would reward providers who receive a “significant portion” of their revenue from an “alternative payment model” or patient-centered medical home with a 5 percent payment bonus. It would also allow broader use of Medicare data for “transparency and quality improvement” purposes.

House Energy and Commerce Committee Chairman Fred Upton, R-Mich., one of the bill’s drafters, has called it a “historic opportunity to finally move to a system that promotes quality over quantity and begins the important work of addressing Medicare’s structural issues.”

A “technical advisory committee” will review and recommend how to develop alternative payment models. Measures will be developed to judge the quality of care provided and how physicians will be rewarded or penalized based on their performance.  While the law lays out a structure on how to move to these new payment models, much of their development will be left to future administrations and federal regulators.  Expect heavy lobbying from the physician community on every element of implementation.

Q. Will seniors have to help pay for the plan?

Starting in 2018, wealthier Medicare beneficiaries (individuals with incomes above $133,500, with thresholds higher for couples), would pay more for their Medicare coverage, a provision expected to impact 2 percent of beneficiaries.

In addition, starting in 2020,  “first-dollar” supplemental Medicare insurance known as “Medigap” policies would not be able to cover the Part B deductible for new beneficiaries, which is currently $147 per year but has increased in past years. If the policy had been implemented in 2010, it would have affected Medigap coverage for roughly 10 percent of all 65-year-olds on Medicare, according to an analysis from the Kaiser Family Foundation. Based on declining Medigap enrollment trends among 65-year-olds, expect this policy to impact a smaller share of new Medicare beneficiaries in the future, according to the study.(KHN is an editorially independent program of the foundation.)

Experts contend that the “first-dollar” plans, which cover nearly all deductibles and co-payments, keep beneficiaries from being judicious when making medical decisions because they are not paying anything out-of-pocket and those decisions can help drive up costs for Medicare.

The bill also includes other health measures — known as extenders — that Congress has renewed each year during the SGR debate. The list includes funding for therapy services, ambulance services and rural hospitals, as well as continuing a program that allows low-income people to keep their Medicaid coverage as they transition into employment and earn more money. The deal also would permanently extend the Qualifying Individual, or QI program, which helps low-income seniors pay their Medicare premiums.

AARP, a seniors’ lobby group, sought to repeal a cap on the amount of therapy services Medicare beneficiaries could receive, telling senators that it would be a “key vote” for the organization.

“Similar to the SGR debate, an extension of the therapy cap — rather than full repeal — is short-sighted and puts beneficiaries in a dire situation when the extension expires,” AARP Executive Vice President Nancy LeaMond wrote in a letter to senators.  “This amendment is important to the overall success of the Medicare program and the health and well-being of Medicare’s beneficiaries.” The amendment failed.

Q. What about other facilities that provide care to Medicare beneficiaries?

Post-acute providers, such as long-term care and inpatient rehabilitation hospitals, skilled nursing facilities and home health and hospice organizations, would help finance the repeal, receiving base pay increases of 1 percent in 2018, about half of what was previously expected.

Other changes include phasing in a one-time 3.2 percentage-point boost in the base payment rate for hospitals currently scheduled to take effect in fiscal 2018.

Scheduled reductions in Medicaid “disproportionate share” payments to hospitals that care for large numbers of people who are uninsured or covered by Medicaid would be delayed by one year to fiscal 2018, but extended for an additional year to fiscal 2025.

Q. What is the plan for CHIP?

The bill adds two years of funding for CHIP, a federal-state program that provides insurance for low-income children whose families earned too much money to qualify for Medicaid. While the health law continues CHIP authorization through 2019, funding for the program had not been extended beyond the end of September.

The length of the proposed extension was problematic for Democrats, especially in the Senate. In February, the Senate Democratic caucus signed on to legislation from Sen. Sherrod Brown, D-Ohio, calling for a four-year extension of the current CHIP program. A Senate amendment to extend CHIP funding for four years failed.

Q. What else is in the SGR deal?

The package, which Boehner, R-Ohio, and Pelosi, D-Calif., began negotiating in March, also includes an additional $7.2 billion for community health centers over the next two years.  NARAL Pro-Choice America and Planned Parenthood have criticized the provision because the health center funding would be subject to the Hyde Amendment, a common legislative provision that says federal money can be used for abortions only when a pregnancy is the result of rape, incest or to save the life of the mother.

In a letter to Democratic colleagues before the House vote, Pelosi has said that the funding would occur “under the same terms that Members have previously supported and voted on almost every year since 1979.” In a statement, the National Association of Community Health Centers said the proposal “represents no change in current policy for Health Centers, and would not change anything about how Health Centers operate today.”

Q. How did the doctor payment formula become an issue?

Today’s problem is a result of efforts years ago to control federal spending — a 1997 deficit reduction law that set the SGR formula. For the first few years, Medicare expenditures did not exceed the target and doctors received modest pay increases. But in 2002, doctors were furious when their payments were reduced by 4.8 percent. Every year since, Congress has staved off the scheduled cuts. But each deferral just increased the size of the fix needed the next time.

The Medicare Payment Advisory Commission (MedPAC), which advises Congress, says the SGR is “fundamentally flawed” and has called for its repeal. The SGR provides “no incentive for providers to restrain volume,” the agency said.

Q. Why haven’t lawmakers simply eliminated the formula before?

Money was the biggest problem. An earlier bipartisan, bicameral SGR overhaul plan produced jointly by three key congressional committees would cost $175 billion over the next decade, according to the Congressional Budget Office, and lawmakers could not agree on how to pay for the plan.

This time Congress took a different path. The measure both chambers approved is not fully paid for. That is a major departure from the GOP’s mantra that all legislation must be financed. Tired of the yearly SGR battle, veteran members in both chambers appeared willing to repeal the SGR on the basis that it’s a budget gimmick – the cuts are never made – and therefore financing is unnecessary.

But some senators objected. In remarks on the Senate floor, Sen. Jeff Sessions, R-Ala., said any repeal of the SGR “should be done in a way that should be financially sound.”

Most lawmakers felt full financing for the Medicare extenders, the CHIP extension and any increase in physician payments over the current pay schedule was needed. Those items account for about $70 billion of financing in the approximately $210 billion package.

Conservative groups urged Republicans to fully finance any SGR repeal and said they would be watching senators’ actions closely. For example, the group Heritage Action for America promised to “key vote” an amendment that the measure be fully financed. That amendment failed.

Some members of Congress seemed pleased to have this recurring debate behind them. “Stick a fork in it,” said Rep. Upton. “It’s finally done.”

This article was updated to include Senate floor action.

FAQ: Congress Passes A Bill To Fix Medicare’s Doctor Payments. What’s In It?