While physicians have sidestepped drastic Medicare payment cuts for 2013, doctors’ groups and lawmakers are gearing up for yet another battle to scrap the formula that forces Congress to consider the “doc fix” on a yearly basis.

For doctors, the nail-biter has become a familiar but frustrating rite. Lawmakers invariably defer the cuts prescribed by a 1997 reimbursement formula, which everyone agrees is broken beyond repair. But the deferrals are always temporary due to the difficulty of finding offsetting cuts to pay for a permanent fix. In 2010, Congress delayed scheduled cuts five times, with the longest patch lasting one year. 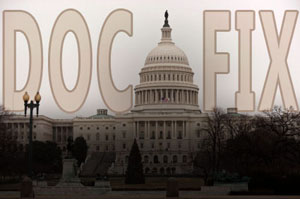 While Democratic and Republican leaders say they do not want Medicare physicians’ payments to be cut, there is often disagreement about how to offset the costs of a fix. But proponents of a change were buoyed by the recent report from the Congressional Budget Office showing the price tag is now lower than past estimates due to slower growth in Medicare costs over recent years. “Cutting scores in half is certainly helpful,” House Ways and Means Chairman Dave Camp told reporters in late February, noting, “that’s still a very large number.”

Two House initiatives to get rid of the payment formula have been announced already in this Congress: a plan unveiled by key GOP committee leaders and, separately, a bill offered by a Democrat and a Republican. “For far too long, the only thing certain about the Medicare physician payment system has been uncertainty about the future,” House Energy and Commerce Chairman Fred Upton and Ways and Health Subcommittee Chairman Joe Pitts wrote in a statement about the Republicans’ efforts. “As a result, the complexity of the problem and financial burden on taxpayers has snowballed.”

Here are some answers to frequently-asked questions about the doc fix.

Q: How did this become an issue?

Today’s problem is a result of yesterday’s efforts to control federal spending – a 1997 deficit reduction law that called for setting Medicare physician payment rates through a formula based on economic growth and known as the “sustainable growth rate” (SGR). For the first few years, Medicare expenditures did not exceed the target and doctors received modest pay increases. But in 2002, doctors reacted with fury when they came in for a 4.8 percent pay cut. Every year since, Congress has staved off the scheduled cuts.  But each deferral just increased the size – and price tag – of the fix needed the next time.

The formula also reinforces what many experts say are some of the worst aspects of the current fee-for-service system – rewarding doctors for providing more tests, more procedures and more visits, rather than for better, more effective care. In an Oct. 14, 2011, letter to lawmakers, the Medicare Payment Advisory Commission (MedPAC), which advises lawmakers on Medicare payments, called the formula “fundamentally flawed” and said it “has failed to restrain volume growth and, in fact, may have exacerbated it.”

Money is the biggest problem. While a Feb. 5 Congressional Budget Office estimate lowered the cost of the doc fix over the next decade to $138 billion due to lower Medicare spending on physician services over the last three years, that’s still a lot of money, and so far Congress can’t agree on where to find that kind of cash.  Last January CBO estimated the cost of the doc fix at $316 billion, which it reduced to $245 billion last August.

For physicians, the prospect of facing big payment cuts is a source of mounting frustration. Some say the uncertainty has led them to quit the program, while others are threatening to do so. Still, defections have not been significant to date, according to MedPAC. In a March 2012 report the panel stated that while beneficiaries’ access to care was good, for some “finding a new primary care physician continues to be more difficult than finding a new specialist.”

Physician groups continue to lobby Congress to repeal the SGR and to enact a permanent payment fix. The deal Congress passed Jan. 1 to avoid the fiscal cliff by raising some taxes and putting off automatic budget cuts also stopped a 26.5 percent doctor pay cut but did not raise the level of Medicare reimbursement to physicians.

Q: What do experts recommend?

In October, 2011, MedPAC recommended eliminating the formula without increasing the deficit by cutting fees for specialists and imposing a 10-year freeze on rates for primary care physicians. That proposal was strongly opposed by health industry groups, as well as the American Medical Association (AMA).

The AMA has recommended a five-year transition fee scale that allows time to test new payment approaches, including several being tested as part of the 2010 health care law.

Other options to fix the reimbursement formula include a bill introduced Feb. 5 by Rep. Allyson Schwartz, D-Pa., and Rep. Joe Heck, R-Nev., an osteopathic physician.  Among its provisions, the measure would repeal the SGR, increase payments to physicians for four years and test new payment and delivery models.

Some key House Republicans also have a plan as well. The chairmen of the Energy and Commerce and the Ways and Means committees, as well as subcommittee leaders, unveiled an SGR repeal plan that would freeze physician payment rates at their current levels for the next 10 years with future increased based individual physicians’ quality of care and efficiency. The have promised any fix “will not add a dime to the deficit.” They are seeking comments on the proposal.

Q: What happens next?

The current fix expires on Dec. 31, but a permanent fix would likely have to be melded into larger financial reforms.

Meanwhile, doctors face a more moderate Medicare pay cut this year. A series of automatic cuts in federal spending, called sequestration, went into effect March 1. By law, the Medicare cuts don’t begin until April 1. They include a 2 percent reduction to physicians and other Medicare providers – including hospitals.

Carol Eisenberg and Lexie Verdon contributed to this report.

FAQ On Medicare Doctor Pay: Why Is It So Hard To Fix?