As Republicans and Democrats have battled over reopening the federal government and raising the federal debt ceiling, one idea that keeps coming up is a repeal of the 2010 health law’s tax on medical devices. 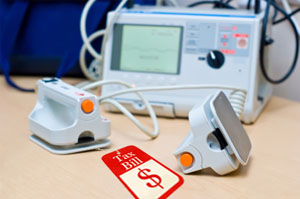 While the idea has drawn support from members of both parties, experts say it’s still a heavy lift for the repeal’s proponents. For starters, repealing the tax would create about a $30 billion revenue hole over the next decade.  And supporters of the law fear that making such a change could start a stampede of demands  for similar rollbacks from insurers and health care providers, who are also subject to new taxes and fees to help finance the health law.

With that in mind, here are some frequently asked questions about the tax.

Q: What is the medical device tax?

A: Since the beginning of this year, medical device manufacturers and importers have paid a 2.3 percent tax on the sale of any taxable medical device. The tax applies to devices like artificial hips or pacemakers, not to devices sold over-the-the counter, like eyeglasses or contact lenses.

Q: Why did Congress put the tax into the health law?

A: The law created a package of new taxes and fees to finance the cost of the health law’s subsidies to help purchase coverage on the online marketplaces, or exchanges, and the law’s Medicaid expansion.

In addition to the tax on medical devices, an annual fee for health insurers is expected to raise more than $100 billion over 10 years, while a fee for brand name drugs will bring in another $34 billion. In 2018, the law also will impose a 40 percent excise tax on the portion of most employer-sponsored health coverage (excluding dental and vision) that exceeds $10,200 a year and $27,500 for families. That has been dubbed a “Cadillac” tax because it hits the most generous plans.

Q: Why do proponents of the repeal suggest the medical device manufacturers should get a break over those other industries?

A: Medical device makers say the tax will cost 43,000 jobs over the next decade and will increase health care costs. In a September letter to lawmakers, device manufacturers said if the tax were not repealed, “it will continue to force affected companies to cut manufacturing operations, research and development, and employment levels to recoup the lost earnings due to the tax.”

The device makers also assert that, unlike other health industry groups that are being taxed through the health law, they will not see increased sales because of the millions of people who will be getting insurance through the overhaul.  “Unlike other industries that may benefit from expanded coverage, the majority of device-intensive medical procedures are performed on patients that are older and already have private insurance or Medicare coverage. Where states have dramatically extended health coverage, such as in Massachusetts where they added 400,000 new covered lives, there is no evidence of a device ‘windfall,'” the group’s letter to Congress stated.

The left-leaning Center for Budget and Policy Priorities has challenged industry assertions that the tax will lead medical device manufacturers to shift operations overseas and that it will reduce industry innovation. Since the tax applies to imported and as well as domestically produced devices, sales of medical devices in the U.S. will be subject to the tax whether they are produced here or abroad, the center’s analysis notes.  Innovation in the medical device industry has slowed for reasons unrelated to the tax, the center said, noting that the health law may spur medical-device innovation by promoting more cost-effective ways to deliver care.

Q: Who else is pushing for a repeal?

A: Republicans and Democrats in both chambers – in particular those who hail from states with many device manufactures, such as Minnesota, Massachusetts and New York — have sought to repeal the medical device tax.  Most recently, Sen. Susan Collins, R-Maine, has pushed for a repeal as part of larger legislation to lift the debt ceiling and reopen the government.

The Republican-controlled House has twice passed legislation to scrap the tax, including a recent measure that would have also delayed implementation of the health law by a year. In the Senate, 33 Democrats and Maine Independent Angus King voted earlier this year to repeal the tax, although the vote was a symbolic one, taken as part of a non-binding budget resolution.

Q. Who opposes the repeal?

The White House in the past has said the president would not support such a measure, although it has not commented about the issue in the current negotiations.  In a statement issued last year about a congressional effort to get rid of the tax, the White House said, “The medical device industry, like others, will benefit from an additional 30 million potential consumers who will gain health coverage under the Affordable Care Act starting in 2014. This excise tax is one of several designed so that industries that gain from the coverage expansion will help offset the cost of that expansion.”

Senate Majority Leader Harry Reid, D-Nev., has said that the Senate will reject any attempts by Republicans to delay implementation of the law or to repeal the medical device tax as part of reopening the government or lifting the federal debt ceiling. But it is unclear if he would still oppose the effort if it was part of a major bipartisan compromise on the health law and budget issues.

Meanwhile, other health care providers are watching closely. In a recent blog post, Chip Kahn, president and chief executive officer of the Federation of American Hospitals, an association of for-profit institutions, wrote that if Congress reopens the heath law “to reconsider the contributions of any one health care sector that benefits from ACA’s coverage expansion, it should simultaneously address the changed circumstances of hospitals and provide similar relief.”