The Children’s Health Insurance Program, a joint federal-state program known as CHIP, has helped cut in half the number of uninsured children since being enacted less than two decades ago, but its future is in doubt due to limited funding in the federal health law of 2010.  A year from now, CHIP will run out of money.  Some advocates for the program want the federal government to finance CHIP for another four years, while other experts have suggested two would suffice.  The Senate Finance Committee’s Subcommittee on Health Care will hold a hearing on the issue Tuesday.

Q: What is the Children’s Health Insurance Program?

A: CHIP was created in 1997 to help provide insurance for low-income children whose families earned too much money to qualify for Medicaid.  It provides coverage to 8 million children at a cost of about $13 billion. The federal government provides capped funding to states for the program and some states use the money to expand their children’s Medicaid programs, while others keep the programs separate. 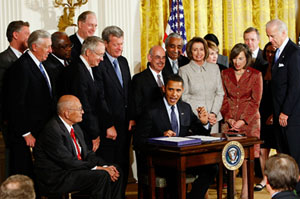 State eligibility rules for the program vary, from 138 percent of poverty to more than four times the poverty level. Together, Medicaid and CHIP provide health insurance to one in every three children in the U.S. and brought the uninsured rate for children down from 14 to 7 percent since it began.

Q: How did the Affordable Care Act affect CHIP?

A: While the health law continues CHIP through 2019, states will begin running out of money shortly after Sept. 30, 2015.  If Congress approves funding beyond that time, CHIP’s matching rates – the amount it gives states to pay physicians, hospitals and other providers for services – would range from 88 to 100 percent. The law also requires states to maintain the current eligibility for children in Medicaid and CHIP until 2019. 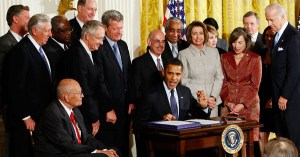 The law also affects eligibility for Medicaid, which will have some effect on CHIP. States must expand Medicaid to 138 percent of the federal poverty line for all children under age 19. This is in contrast to the Supreme Court’s decision on the ACA that makes the expansion of Medicaid for adults optional for states. Prior to the law’s passage, the eligibility level for children varied by age, although the federal minimum standard for children 6 to 18 was 100 percent of the poverty line, according to the Kaiser Commission on Medicaid and the Uninsured (KHN is an editorially independent program of the foundation).

The health law also requires states to shift children ages 6 to 18 in families with incomes between 100 percent of poverty and 138 percent of poverty out of CHIP and into Medicaid as of Jan. 1 of this year, with states still receiving the enhanced matching rate for coverage of these children.

Q: What are the concerns about CHIP’s future?

A:  Advocates for children are concerned that the health law’s provisions, such as premium subsidies to help low-income families buy private insurance, will not provide coverage that is as generous as children now receive in CHIP. They argue that some of these families will not be able to afford to seek services even after getting subsidized insurance because they may not be able to pay the deductibles and copayments.

According to estimates from the Finance subcommittee, if the program is not funded beyond next September, as many as 2 million children won’t have access to affordable health care.  One analysis found that cost-sharing would increase and the number of child-specific services covered would decline if millions of children now enrolled in CHIP were shifted to private coverage through the health law’s insurance exchanges.

There’s also concern that if CHIP were not continued, some children now eligible for the program may not qualify for coverage in the health law’s online marketplaces. The health law precludes families from getting subsidies if they are offered “affordable” coverage at work—but that standard is determined by weighing the cost of an individual policy against 9.5 percent of household income. That eliminates many low-income families.

A: Two of CHIP’s creators, Sen. Jay Rockefeller, D-W.Va., and Rep. Henry Waxman, D-Calif.,  have sponsored legislation to fund the program through Sept. 30, 2019. Both are retiring at the end of the year. Advocates hope the legislation can pass in the lame-duck session after the November elections, but it may well wait until next year.  The Medicaid and CHIP Payment and Access Commission, a congressional advisory group, has recommended a two–year extension to give lawmakers time to address concerns about affordability of coverage for low income families and determine whether the health law’s exchange plans are an appropriate alternative for CHIP kids.

This article was updated to reflect newer numbers for CHIP’s matching rates for doctors and hospitals and  deletes some earlier references to Medicaid.