HEALDSBURG, Calif. — Farm laborers in yellow safety vests walked through neatly arranged rows of grapes Friday, harvesting the last of the deep purple bundles that hung from the vines, even as the sky behind them was dark with soot.

Over the hill just behind them, firetrucks and first responders raced back and forth from a California Department of Forestry and Fire Protection staging area, working to contain a wildfire raging through the rugged hills and canyons in northeastern Sonoma County. As of Sunday, more than 3,000 firefighters were battling the blaze, and a broad swath of the county — more than 180,000 residents from mountain to coast — was under evacuation orders as Northern California endured a historic windstorm that was fueling the flames. 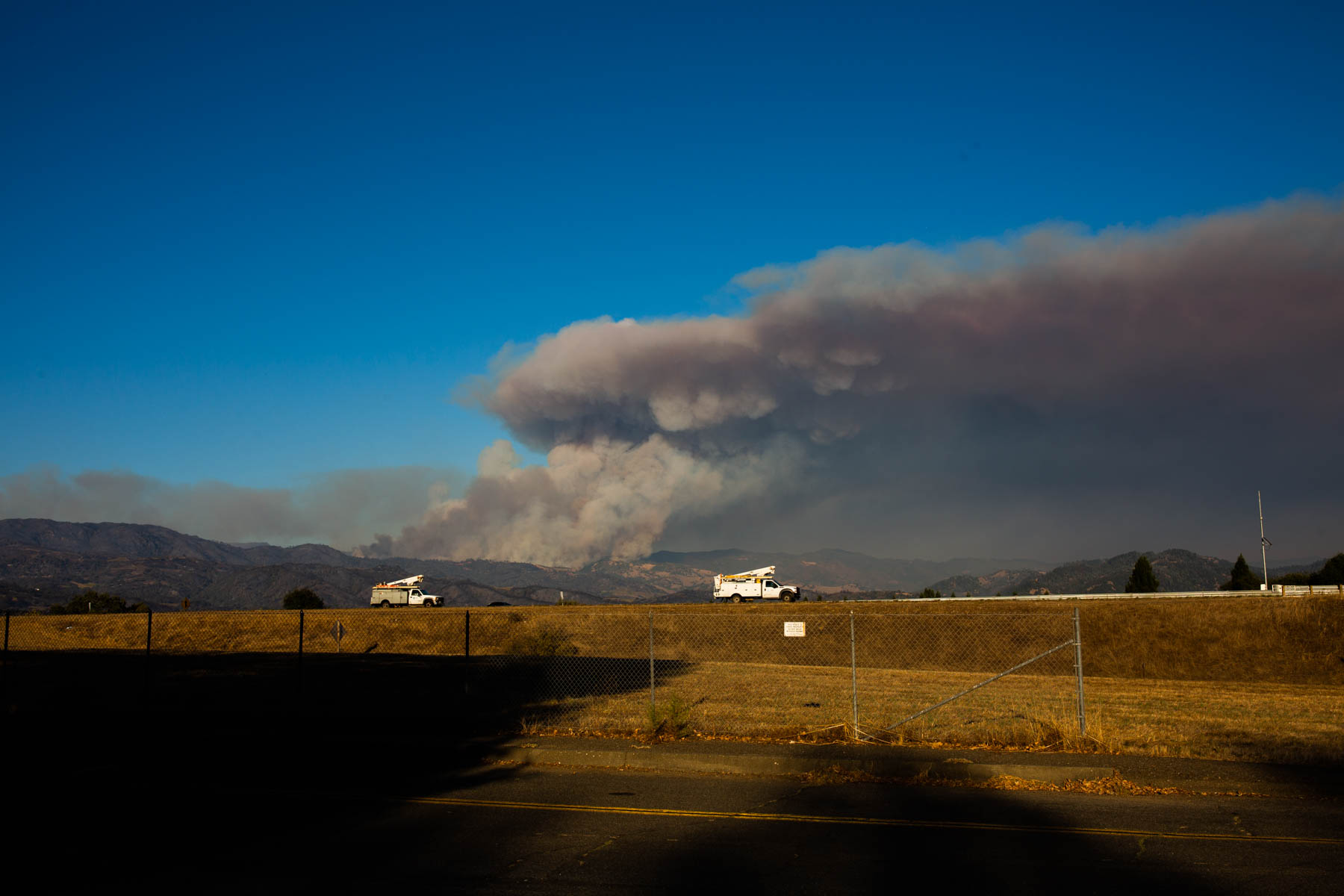 As of Sunday, more than 3,000 firefighters were battling the explosive Kincade Fire, and a broad swath of Sonoma County, from mountain to coast, was under evacuation orders. (Anna Maria Barry-Jester/KHN)

For farmworkers in Sonoma County’s fabled wine country, the Kincade Fire poses a daunting set of risks. October marks not only fire season in California, but also the peak of the grape harvest. In areas not imminently threatened, some workers labored through the heat and dangerous smoke to retrieve some of the hundreds of thousands of dollars worth of grapes that had yet to be harvested. As the fire continues to spread, many now are finding that their work — and paychecks — have been suspended.

Sonoma County is familiar with fire. The Tubbs Fire tore through the area in 2017, killing 22 people and destroying more than 5,000 homes. Last year, dense smoke from Butte County’s Camp Fire — the deadliest in state history — hung in the valley for days.

As wildfires of this strength and intensity grow more frequent, so do concerns for field workers, who can face conditions that jeopardize their health, wages and housing.

Outside of the fire itself, the main health concern in wildfire conditions is smoke, which produces particulate matter, a mix of gases and microscopic pieces of solid matter. The particles can penetrate deep into the lungs, increasing the risk of respiratory diseases and asthma, as well as heart problems.

These risks lead health authorities to warn people in areas affected by wildfire to stay indoors and limit exertion. Farmworkers, an essential component of the wine country economy, can’t always take such precautions. 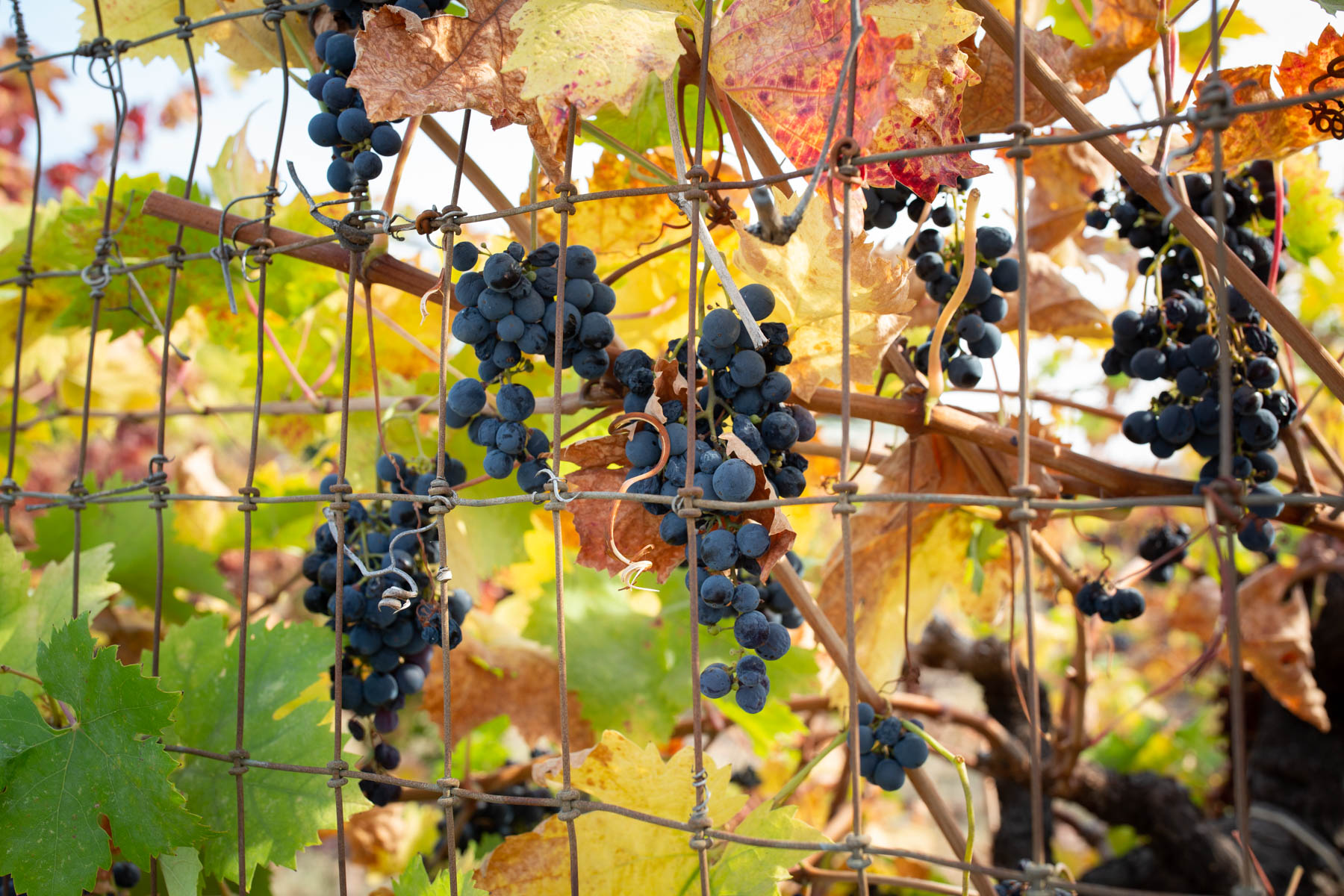 October marks not only fire season in California but also the peak of the grape harvest. As wildfires grow more frequent, so do concerns for field workers, who can face conditions that can jeopardize their health. (Anna Maria Barry-Jester/KHN)

On Saturday, Manuel Ortiz Sanchez, 52, sat with his family outside Santa Rosa’s Veterans Hall, which overnight had been transformed into a shelter. He had been evacuated from his home in Healdsburg and was nervous about what it would mean for his family. Born in Mexico, he has worked in the region’s vineyards for more than 20 years. He already had lost a day and a half of work to the smoke. Would he be paid next week if the vineyard where he works were still shut down? “It’s up to the boss,” he said.

Inside the hall, volunteers with Corazón Healdsburg, a nonprofit that works with the local Latino community, was helping Spanish-speaking families register at the shelter. One woman wondered whether the registration bracelet would identify her as an immigrant and whether authorities would be coming to the shelter. 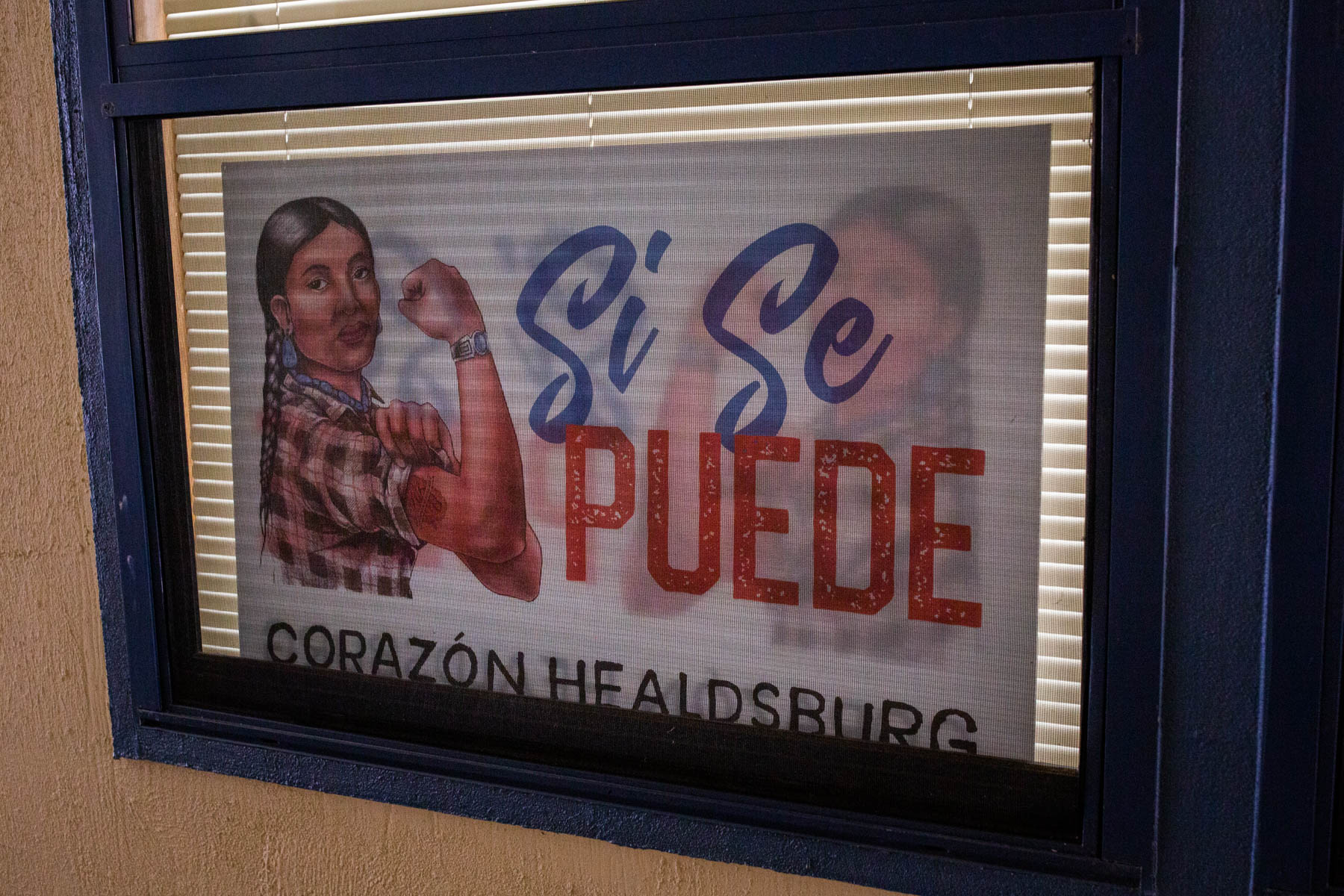 Corazón Healdsburg, a nonprofit that works with the local Latino community, is helping families affected by the Kincade Fire. “They’re sudden,” says Leticia Romero, director of community engagement. “You go to bed, and you wake up to this natural disaster.” (Anna Maria Barry-Jester/KHN)

At another table, volunteers offered to take contact information for people who are undocumented, and therefore not eligible for most federal relief. After the 2017 fire, local organizations created a fund to help people who were undocumented and affected by the fires, and that fund is back up and running. Ninety percent of the more than 2,000 people the fund helped in 2017 did not lose homes, but they lost wages and the food in their fridge from electrical outages, said Mara Ventura, executive director of North Bay Jobs With Justice.

Advocates have been pushing for labor standards related to wildfires and smoke. Though a bill failed to pass the California legislature this year, the state adopted temporary emergency regulations in July. They require employers to check the air quality before and during a shift. When pollutants rise above a certain threshold, an air quality index of 150, workers are to be moved to a safer location if possible, and provided protective masks if not. The AQI in eastern Sonoma County has routinely topped 150 in recent days.

Even heavy-duty masks aren’t much of a solution for someone laboring outside, said Celeste Philip, the health officer for Sonoma County. When used correctly, they are uncomfortable and make it difficult to breathe, and it is hard to work in them for very long. The best way for workers to stay safe is to limit their outdoor exposure, she said.

In the days after the Kincade Fire erupted on Oct. 23, Sonoma County authorities allowed some grape growers and their workers onto vineyards within the evacuation zone to try and save their crops, said James Gore, a county supervisor. About 10% of the grapes in the county, mostly those used to produce cabernet, were still on the vine when the fire began. “Safety first, but then economy,” he said.

Though there’s no particular oversight of the process, Gore said, the local Farm Bureau and other industry groups have made sure the growers are aware of the health risks and workers’ rights. Many people, including farmworkers who often aren’t paid for time off, want to work, he said. “People can work, but it must never be under duress.”

Still, he said, “if somebody wants perfect health, they need to leave our community, because we have smoke here.”

Concerns that farmworkers, many of whom speak primarily Spanish, weren’t getting health advisories and other warnings during the 2017 fires led to an overhaul of county communications, which this time are being provided in both Spanish and English. Gore, who speaks Spanish, said he’d been to the evacuation shelter to speak with more than 100 agriculture workers about those risks, and to let them know they are not obligated to work.

Fernando Gonzalez was at a shelter in Healdsburg on Friday before it, too, was evacuated. From Mexico, Gonzalez was five or six months into his stay in the U.S., working on a temporary visa for agricultural workers, when he was awakened in the night by colleagues who had noticed the fire. His employer shuttled him and 40 to 50 other employees to the evacuation center after deciding that the house they shared on the vineyard property wasn’t safe.

Gonzalez said he had a couple of weeks left on his contract, but they were being sent home to Mexico early. He said he was paid for the week of work, including two missed days, and was glad not to be laboring in the heavy smoke.

Many other farmworkers are local residents. Another family who arrived at the shelter on the first night of the fire had lost their trailer home and all their belongings to the fire, said Leticia Romero, director of community engagement at Corazón Healdsburg.

In a room that normally hosts classes — a bright mural spanning one wall — volunteers filled bins with clothing, hygiene supplies and other essentials for that family and others. Corazón also has launched a fund to provide emergency cash assistance.

“This is our second year of fires,” Romero said. “They’re sudden. You go to bed, and you wake up to this natural disaster.” In some ways, the lingering emotional trauma is the thing she worries about most for her community.