The charismatic head of health information technology at the Department of Health and Human Services will step down this fall.  In an e-mail to staff, Dr. Farzad Mostashari didn’t divulge why he was departing after serving for two years in that position and four years at the agency. 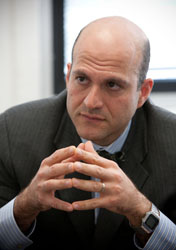 “It is difficult for me to announce that I am leaving. I don’t know what I will be doing after I leave public service, but be assured that I will be by your side as we continue to battle for healthcare transformation,” Mostashari wrote in an email to the staff of the Office of the National Coordinator for Health Information Technology.

A source close to the situation said that it was Mostashari’s decision to leave.

His email was very personal at times. He wrote about his mother’s 2009 “life-threatening heart arrhythmia” and being frustrated at the time that there were no electronic records for him to see. Problems after her discharge led her to need emergency surgery. “The complications, which weren’t supposed to happen, indecently increased the hospital’s revenue,” Mostashari wrote.

Health and Human Services Secretary Kathleen Sebelius shed no light on Mostashari’s departure. In an email to colleagues, she called Mostashari’s tenure as National Coordinator a time of “great accomplishment” and that his “expertise, enthusiasm and commitment to innovation and health IT will surely be  missed.”   She said: “This critical work has not only brought about important improvements in the business of health care, but also has helped providers better coordinate care, which can improve patients’ health while saving money at the same time.”

Mostashari, known in D.C. circles for his bow tie and his enthusiasm for wonky topics, is the second person to serve as the National Coordinator for health IT. He followed Dr. David Blumenthal into the job after serving as his deputy.

Mostashari played a pivotal role in pushing the American foot-dragging health care system to go digital.  In a 2012 interview with Kaiser Health News he proclaimed: “Data is power.”

Mostashari encouraged health care systems to install electronic medical records and to demonstrate that they’re “meaningfully using” them.  In his email to staff, he reminisced about how 32 staff members took on the “daunting task” of establishing a new certification program, endorsing national standards, designing and setting up new grant programs to assist in health IT adoption, exchange, workforce, research and privacy. The pace of the work earned them  “‘The Office of No Christmas’ moniker … for yuletide rulemaking,” he wrote.

Mostashari has also been a champion of patients taking control of their health care and using technology to do so.  As he did with his e-mail, he frequently brought in examples from his own life to demonstrate the need for electronic records. He spearheaded the “Blue Button” concept that would allow patients to download their electronic health records into a simple text file onto personal computers and smart phones.  Now, third-party apps are available to help consumers use that data in easy to understand way.  The Blue Button service is available from the federal government for veterans as well as Medicare beneficiaries.

But not everybody followed Mostashari onto the electronic-record bandwagon. Many doctors complain that switching to EHRs is too expensive and cumbersome. Critics claimed he exaggerated EHRs’ benefits and downplayed evidence that they sometimes impede care and harm patients. So far the use of computerized records has not delivered the promised cost savings, the RAND Corp. said in a January report.

The health technology community “should re-examine whether and how regulation of electronic health applications could foster improved care, public health, and patient safety,” a group of skeptical experts wrote to Mostashari two years ago.

In December Mostashari’s office stopped short of recommending that EHR vendors be required to report computer mistakes that put patients at risk.

Sebelius said Mostashari would continue to serve in his role while a search for his replacement is underway.

In his email, Mostshari praised staff for a litany of accomplishments and said that it should provide hope that “we can still do big things as a country.”  He wrote, “We have been pioneers in a new landscape, but that landscape is one changed forever, and for better.”

Jay Hancock contributed to this report.