There are already tens of thousands of mobile health applications available for download on smart phones and tablets, allowing consumers to do anything from count calories to monitor their blood sugar level and fight depression. But it can be hard to know which ones actually deliver on their health claims and provide accurate information. 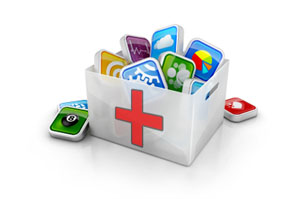 The Food and Drug Administration, the agency in charge of regulating mobile health apps, has evaluated a few apps so far, but it still has not made clear which apps will require approval. Some app developers have raised concerns about whether the FDA can keep up with the fast-paced innovations of Silicon Valley.

But a bill set to be introduced in the U.S. House of Representatives later this month aims to smooth the agency’s evaluation process. The Healthcare Innovation and Marketplace Technologies Act (HIMTA) would establish a special Office of Mobile Health at the FDA to provide recommendations on mobile health app issues. It would also create a mobile health developer support program at the Department of Health and Human Services to help app developers make sure they are operating within privacy regulations, including the federal law HIPAA that sets privacy standards.

“Currently, our healthcare system works against small-to-large startup entrepreneurs with a multitude of barriers to entry,” Rep. Mike Honda, D-Calif., who is introducing the bill, said in a statement. “Why have the principles of Silicon Valley, which I represent – competition, innovation, and entrepreneurship – not fully manifested themselves in the healthcare information technology space?  This bill gets us closer to that space.”

Andrew Rosenthal, who works for Massive Health, a mobile health app company in San Francisco, says the Office of Mobile Health at the FDA would be a welcome change for developers.

“We’re a small startup, and the regulatory process is really designed for big medical companies with significant staff support and multiyear product release cycles,” says Rosenthal. “It’s a confusing process which requires attention and resources to navigate.” He hopes an FDA office dedicated to mobile health might help streamline the regulatory process for smaller startups like his company, which makes an app that helps users eat a healthier diet.

The FDA began regulating a handful of medical apps last year and released a first draft of guidelines requiring mobile apps developers making medical claims to apply for FDA approval. The final regulations have not yet been released, but some developers have complained that the approval process will be too slow. Medical devices, which the FDA regulates in a similar way, wait six to 20 months for approval, according to the Government Accountability Office.

Joel White, executive director of the Health IT Now Coalition, which includes the computer chip maker Intel, pharmacy benefit manager Medco, Verizon, Aetna and the U.S. Chamber of Commerce, worries that the FDA lacks the regulatory structure to “not only protect patient safety but also avoid killing off innovation in a market that’s explosively dynamic.”  He would prefer to see the government set up a separate, more nimble agency to regulate mobile health, a new entity that bypasses the FDA entirely.

The Food and Drug Administration Safety and Innovation Act (FDASIA), which was signed into law in July, sets up a commission of several government agencies to come up with a proposed strategy for regulating mobile health apps. But the commission’s report is not due for another 16 months—long after the FDA is expected to release its final regulation.

An office of mobile health within the FDA is needed to handle the booming industry’s needs before then, according to Rep. Honda’s office. Mobile health apps are, after all, a quickly growing sector, regardless of attempts to regulate them.

By 2015, 500 million smartphone users are expected to be using medical apps, according to Research2Guidance, a global mobile research group.