In the months leading up to the presidential election, Guillermo and his friends at Oakland International High School had a running joke.

“If Donald Trump wins,” they’d tease each other, “go buy some suitcases.” Then they’d laugh. They didn’t think the candidate who was threatening to deport millions of undocumented immigrants stood a chance.

Guillermo, an 18-year-old senior, fled gang violence and police corruption in El Salvador three years ago. Kaiser Health News is not using his last name at his request because he fears jeopardizing his quest for legal status in this country.

The night of the election, Guillermo flipped on the television to check the news while celebrating his father’s birthday. “Look,” he told a friend, “Trump’s ahead.” The next morning, he arrived at school to find teachers and other staff in tears.

“I felt a little strange,” he said. The scenario that had seemed impossible a day earlier was suddenly very real. Some kids still joked about being kicked out of the country, but the humor had a new edge to it.

Around the country, children and adolescents who are undocumented immigrants or who have undocumented family members, are experiencing a surge in stress, depression and anxiety, advocates, educators and mental health providers say. The same is true for young people belonging to other groups targeted by threats or hate crimes, including Muslim and transgender youth.

Keith Humphreys, a professor of psychiatry at Stanford University, says it would be too soon to try to quantify the impact of the election on people’s mental health. But he believes this election has been “uniquely scarring.” Specifically, he says, members of groups that have been targeted by hateful rhetoric are now uncertain whom they can trust. He lists, among others, Muslims, Jews, Latinos, African-Americans and women and victims of sexual assault.

During his campaign, Donald Trump announced plans to create a Muslim registry and to immediately deport as many as 3 million people upon taking office. A tape recording of his remarks about grabbing women by their genitals was widely reported. 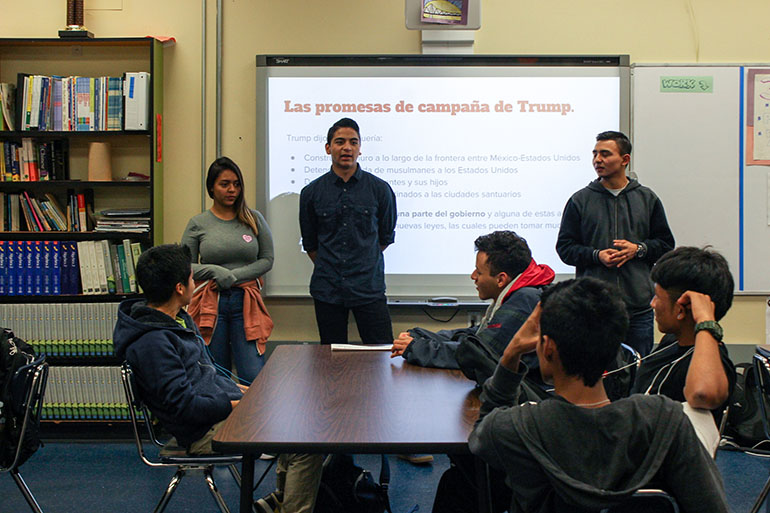 In an effort to allay fears after Donald Trump won the presidential election, seniors from Oakland International High School taught younger students about the electoral college, government checks and balances and their rights as immigrants. (Jocelyn Wiener for KHN)

In November, the FBI reported that hate crimes had increased six percent in 2015 — during the run-up to the presidential election — compared to the previous year.

In recent weeks, civil rights groups and journalism organizations in California and around the country have reported threatening incidents apparently linked to campaign themes. Among the reports: a Redding, Calif., high school student who handed out fake “deportation” notices to fellow students, and teachers in Los Angeles and San Jose who told their students that they or their parents would be deported.

Alma Leyva, project manager of Health Initiatives at the Dream Resource Center of the UCLA Labor Center, did a study a few years ago on the experience of stress among undocumented young people. She said 83 percent of respondents reported living in a state of heightened vigilance, altering their behaviors to avoid detection.

The election has exacerbated this, said Leyva, who herself came to California from Mexico without papers when she was one year old: “You can see it and hear it how scared folks are, and how uncertain the future feels for them.”

At Oakland International High School, students say they feel especially vulnerable. All of the school’s 349 students are English learners and recent arrivals. Approximately 30 percent are undocumented; 28 percent are refugees or those who have been granted asylum. Even before the election, nearly half of 11th and 12th graders at the school reported frequent, sad and hopeless feelings, and nine percent had seriously considered suicide, according to the 2014-2015 California Healthy Kids Survey.

The day after the election, students were crying, shouting, cursing and hugging, said Carmelita Reyes, co-principal of the school.

“To be honest, I don’t think I’ve seen anything this raw from adults and kids since 9/11,” she said. 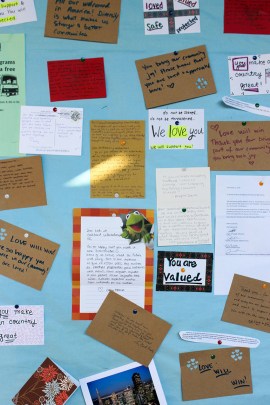 Messages of support for students are posted on several boards around the campus. The messages came from neighbors, staff, and people around the country. (Jocelyn Wiener for KHN)

Reyes knows her students are luckier than some. They live in Alameda County, which provides them with mental health and legal services. They live in the “sanctuary city” of Oakland, where police and other officials do not ask about their immigration status. The city’s mayor, Libby Schaaf, recently told the New York Times that she intends to defy “unjust immigration laws,” even if the Trump administration withholds federal funding to the city.

Many of the school’s neighbors have been outspoken in their support: When students marched the day after the election, people in the neighborhood cheered them on with tears in their eyes, students and staff at the school said.

Reyes said many of her students escaped violent countries and worry about federal raids. Many are particularly anxious about a repeal of the executive action, signed by President Barack Obama, that protects from deportation some undocumented immigrants who arrived in the country as children. They are concerned not just for themselves, she said, but for their families and friends.

The election left some kids angry, she said, “but the vast majority were hurt and confused about why anyone would want them personally to be gone, or would fear them, or think that they were bad people.” She said one student asked a teacher: “How could they hate everything I am?”

‘Not Allowed To Be A Teenager’

Ramzi Hasan, an 18-year-old senior who fled war in Yemen, is especially anxious for his mother. Ramzi is a citizen, but his mother only has a green card. Their family is Muslim, and he wonders if the government will try to send her away.

After Trump won the election, Ramzi said his family asked him to text his teacher with a question: “Do we have to leave now?”

Stephanie Noriega, a clinician from La Familia Counseling Service who works with Oakland International students, said that many young people feel so unsafe since the election that they have lost all motivation to study.

The other day, Noriega sat in Reyes’ office, listening to the principal describe a recent interaction with students who’d been clowning around.

“I said, ‘you cannot do that on the streets,’” Reyes said. The boys protested. “Miss,” they told her, “we are just acting like any other teenagers.”

Reyes’ response: “‘And you’re a Yemeni male who’s Muslim and an immigrant and you cannot act like this right now.’”

“You are not allowed to be a teenager,” she said. “Confining a person to a box really does mess with their overall healthy growth and development.”