About 4.2 million Americans have signed up for private health plans through the end of February via the online insurance marketplaces established by the federal health law — with enrollment jumping by nearly 1 million people last month, the Obama administration said Tuesday. 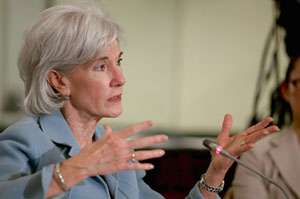 Health and Human Services Secretary Kathleen Sebelius speaks during the U.S. Conference of Mayors in January in Washington. HHS announced Tuesday that about 4.2 million Americans have signed up for health insurance through the health law’s marketplaces. (Photo by Chip Somodevilla/Getty Images)

But the number of young adults signing up over the past five months continues to lag expectations, which could impact insurance premiums next year. Insurance industry officials have been closely watching the mix of customers to make sure they get enough healthy people to balance the cost of covering older Americans who generally require more medical care.

About a quarter of people signing up for coverage through February were between the ages of 18 and 34 in the 36 states served by the federal marketplace — the same percentage as in the January enrollment report, officials said. That compares to a benchmark of 40 percent on which insurers based their premiums for policies sold in the exchanges this year. It’s unclear what impact this may have on premiums in 2015.

Gary Cohen, a top Health and Human Services official, said he is pleased with the number of young adults buying policies. He said he believes insurers will have enough of them to balance the insurance pools and, coupled with other financial protections in the law, they won’t have to significantly raise premiums for 2015.

But others were critical. “It seems the president’s push to enroll young adults is far too little, too late,” said Brendan Buck, spokesman for House Speaker John Boehner. “Young adults – those who the White House repeatedly said are critical – are deciding the health care law is a bad deal.”

The report showed many people who have started the enrollment process have not completed it: 8.7 million people have been deemed eligible to sign up for marketplace plans.

Obamacare supporters are counting on a huge spurt in sign-ups this month before open enrollment for 2014 closes on March 31. Both the president and first lady are making pitches to boost enrollment at events and ads targeted to young people are running on popular television shows.

The administration has added 2,000 people to handle telephone queries, so it now has about 14,000 representatives at its call centers. There are also more than 27,000 people trained to help get people enrolled, said HHS spokeswoman Julie Bataille.

At the same time, Nevada had just a 26 percent increase, but the state insurance exchange disputes the numbers used in the report and says it had closer to a 75 percent jump. Still, an exchange official says they have not seen the enrollment they expected because of technical problems with their website. “We are not pleased with the enrollment growth,” said C.J. Bawden, spokesman for the Silver State Health Insurance Exchange.

Federal officials said they don’t know how many people who have enrolled were previously uninsured or what percent have paid their premiums.

While enrollment in February was slightly lower than in January — 943,000 compared to 1.1 million–federal officials point out that February has fewer days and the January enrollment report counted the final three days of December.

Bataille refused to say whether she thinks enrollment will hit the 6 million mark projected by the Congressional Budget Office earlier this year. “We do believe millions more Americans will come in and enroll in coverage before the March 31 deadline,” she said.

More than 8 in 10 enrollees have received subsidies to lower their monthly premiums, according to the HHS data.

The marketplaces — a centerpiece of the Affordable Care Act — were created so that Americans unable to get coverage through their jobs could select among plans that offer a basic set of benefits. Americans making up to four times the federal poverty level, or nearly $46,000 for an individual, qualify for government subsidies to offset the cost of their premiums.

The administration had announced passing the 4 million enrollment mark about two weeks ago but did not break out the figures.

The percent of people between 18 and 34 enrolling ranged from 18 percent in West Virginia, to 31 percent in Utah, to 45 percent in the District of Columbia. The variation reflects states’ demographics, among other things, federal officials said.

An additional 4.4 million people have been deemed eligible for Medicaid, according to the report, but it is not known how many of those people are new to the program. There is no deadline on when people can enroll in the state-federal health insurance program for the poor.

In addition, more than 544,000 people have purchased standalone dental plans in the federal marketplace, the report said. Dental enrollment figures were not available for the state marketplaces.

Anne Filipic, president of nonprofit Enroll America, said the growth in Florida and Texas reflects partly the need for coverage in those states and the work her group and others have done to drive demand.

“Certainly we and our partners have invested resources heavily in those two states because they have some of the highest uninsured rates in the country (Texas is first; Florida is third), meaning the opportunity for enrollment was highest there,” she said. “We always expected enrollment to increase as we got closer to the March 31st deadline and we’re now seeing that pattern play out.”

Enrollment data from individual states are available on the HHS website.

Nearly 1 Million More Sign Up For Obamacare Plans In February