Just days before new online health insurance markets are set to open, the Obama administration Wednesday released a look at average premiums, saying rates in most states are lower than earlier projected — and that 95 percent of consumers will have at least two insurers to choose from.

The report – released the same day that President Barack Obama and former President Bill Clinton touted the law’s benefits — comes as part of a stepped-up administration effort to explain and defend the health law as congressional Republicans target it for defunding.

Until today’s report, little information was available about insurance rates in most of the 36 states whose online marketplaces will be overseen entirely or partially by the federal government because state leaders opted out of running their own.

The analysis showed huge variations among states:  A family of four making $50,000 in Wyoming, for instance, would pay $1,237 a month on average for a midlevel plan before subsidies, compared to $584 a month on average in Tennessee. After subsidies are added in, however, the cost to both families would be $282 because the amount they pay is linked to their income, not to the cost of coverage. 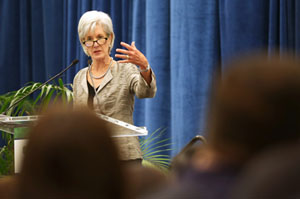 Health and Human Services Secretary Kathleen Sebelius at an appearance in Miami earlier this month (Photo by Joe Raedle/Getty Images).

While experts say premiums vary across the states and even within states, the analysis pegged the national average for an individual at $328 a month for a midlevel policy called a silver plan, before subsidies are factored in. That’s less than the average $392 projection drawn from earlier data released by the nonpartisan Congressional Budget Office, which will mean savings to families as well as to the federal government for tax credits.

One of the report’s most striking findings is that states like Texas and Florida, where the law has faced fierce opposition despite high rates of uninsured residents, will see rates at or below the national average.

Premium prices are influenced by many factors, including what insurers guess their costs will be, a region’s labor costs and how much hospitals and other facilities charge. Competition between insurers is also a significant factor.

Some rural states, such as Wyoming or Alaska, have fewer insurers and therefore, less competition, which could partially account for the higher prices there, said Joel Ario, managing director at consulting firm Manatt Health Solutions and a former administration official.

Other states with high rates include Mississippi, Indiana, Vermont and Connecticut.

Under the law, insurers can vary rates based on age and are allowed to charge older people up to three times more than younger ones, starting Jan. 1. But insurers cannot charge the sick more than the healthy or reject applicants for coverage if they have a medical condition.

While the administration said the rates show that the new plans will offer consumers affordable coverage, there are caveats. The study used weighted averages, for example, which do not reflect what any one consumer might pay. In addition, many of the highlighted rates in the report are for 27-year-olds, who are on the lower end of the premium cost scale.

The insurance marketplaces, which can be used by individuals and small businesses, are expected to enroll 7 million people next year, according to the CBO. Of those, 6 million are expected to qualify for subsidies because they do not have affordable job-based coverage and their incomes are between 100 percent and 400 percent of the federal poverty level. That’s between $11,500 to $46,000 a year for an individual, or up to $94,000 for a family of four. Those who get subsidies must pay between 2 percent and 9.5 percent of their income – on a sliding scale – toward the premium.

While the administration said consumers will have “significant choice” in the subsidized exchanges, data show that in some places only a few insurers are offering plans.

In Alabama, for example, only one carrier is selling through the exchange in most parts of the state. In Missouri only two insurers are offering plans. North Carolina has only two and in some sections, one. In some rural sections of Florida as well as Panama City and the capital of Tallahassee only one insurer is selling exchange policies.

On the other hand, in New Mexico five companies will sell plans throughout the state. In some parts of Ohio as many as seven insurers will compete for exchange customers. In parts of central Pennsylvania as many as 10 will offer plans.

Levitt called the rates in Texas a “surprise,” noting that although the state has put up roadblocks to implementation, “the premiums are coming in below average.”

For instance, a 27-year-old in Dallas, who makes $25,000 a year and thus qualifies for subsidies, could pay $74 a month for the lowest-cost bronze plan, the least expensive type of plan, or $139 for the lowest-cost silver plan, after taking into account the subsidies.
Jacqueline St. Hilaire, president-elect of Texas Association of Health Underwriters and an agent in Addison near Dallas, said the prices generally don’t show a premium spike for a 27-year-old. But she said the premiums may still be too high to entice people to buy coverage.

“People in markets where you have a good public hospital system may look at the premium and other out of pocket costs and realize they’d rather take a chance and go to Parkland” Memorial Hospital, she said.

In Dallas, a family of four with a household income of $50,000 could get the lowest cost bronze plan for as low as $26 a month after subsidies. “That is absolutely amazing,” she said of the family rate.

The premiums in Florida, meanwhile, were in the middle of the pack.

Julian Lago, an insurance agent with Celedinas Insurance Group in Palm Beach Gardens, Fla., said while the prices are comparable, the provider networks will be much smaller than on today’s market which could deter enrollment.

He expects some young people, especially those who qualify for less of a subsidy, to choose the penalty rather than buying coverage.

Premiums Not The Only Consideration

But the premium and the subsidy are not the only things consumers should consider when selecting a plan, said Dan Mendelson, CEO of Avalere Health, a consulting firm that analyzes government programs.

While some of the lowest cost plans are in the “bronze” tier of coverage, such plans generally have higher annual deductibles and co-payments than a silver plan.  Also, the silver plans reduce some costs for subsidy-eligible consumers, which could reduce their exposure to big bills if they fell seriously ill.

“The most important point for consumers is that report does not account for cost sharing,” said Mendelson.

“Although premiums are generally the first and last thing discussed when comparing plans, out-of-pocket costs may be an equally or even more important consideration, particularly for those with significant health care needs.”

Average Obamacare Premiums Will Be Lower Than Projected