The world of health care, like any, is full of haves and have nots. 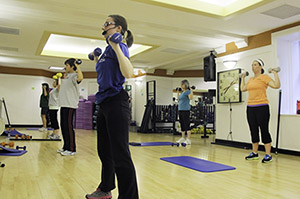 Employees lift weights near the end of a workout class at Sherwin-Williams corporate health and wellness center in downtown Cleveland. (Photo by Sarah Jane Tribble/WPCN – Ideastream)

It’s not hard to spot the difference at Sherwin-Williams corporate headquarters in downtown Cleveland where some 2,500 employees have access to an in-house health and wellness center.

The large paint company encourages its employees to take a break from their work for an exercise class, a workout on the elliptical trainer or a run on the treadmill.

Like other large, “self-insured” employers, Sherwin-Williams has a strong incentive to keep workers healthy: any health care claims by employees are paid directly by the company. The corporation is betting it will be better off paying those costs rather than paying regular premiums to an insurance company.

“The key is to have healthy, engaged, productive, present employees,” says Martha Lanning, the company’s director of health and wellness plans.

Sherwin-Williams and its employees aren’t likely to use the individual marketplace created by Obamacare, but they will help pay for it.

Lanning says companies like Sherwin-Williams must devote staff members to sorting through the legal and administrative issues connected of the Affordable Care Act. These efforts cost money.

She adds, “we also have to pay that transitional reinsurance fee that totals for us, um, with some other aspects of the Affordable Care Act about $4 million in 2014.”

The government collects $63 from large self-insured employers and insurance companies for every covered life under a plan, which includes each employee and each dependent it insures.

That money goes into a fund for health insurance companies, that reimburses them for some extra costs involved in providing coverage to high-risk individuals on the Obamacare exchanges.

How The Health Law Affects Business

You might think of it as a subsidy from big business for making insurance coverage available to everyone without regard to pre-existing conditions.

The fee is reduced next year and is set to gradually disappear over the next three years. Mark Hall, a professor of law and public health at Wake Forest University, says it’s a sensible solution to a temporary problem.

“The great feature of the Affordable Care Act is it now makes everyone qualify for coverage but that means the first people to sign up or to show up are going to be the folks who need it the most. So we expect, particularly at the outset, that there is going to be a heavy load on the insurance pool of high cost people,” Hall says.

But Helen Darling, who heads the D.C.-based National Business Group on Health, fears the fee won’t actually go away in three years.

“Once something is in law and somebody’s got an idea about a new tax, you’re always nervous that that’s going to become a way to finance something else and something that is supposed to go away and be sunset- ed wouldn’t be because they needed the money,” Darling says.

For a company like Sherwin-Williams with $10 billion in sales last year and a net income increase of 70 percent over the last three years, the added cost seems modest, at most. In fact, human resource executives at companies nationwide said as much in a recent national survey by Mercer, the consulting company. The survey concluded found 55 percent of executives felt the Affordable Care Act was having no effect on business operations and performance apart from benefits.

And it’s a burden employers aren’t carrying alone. Mercer also found that most large employers are requiring workers to pay part of the ACA fees.

Sherwin-Williams, for its part, is committed to providing insurance to its employees, says Lanning.

“It’s going to be the differentiating factor for businesses moving forward,” she says.

After all, she adds, the key to an engaged and productive workforce is its health.

This story is part of a reporting partnership that includes NPR, WCPN/Ideastream and Kaiser Health News.