Despite the government’s push to make health information more available, few people use concrete information about doctors or hospitals to obtain better care at lower prices, according to a poll released Tuesday.

Prices for the health care industry have historically been concealed and convoluted, unlike those for most other businesses. The 2010 health law aimed to make such information more transparent. People shopping for insurance can now compare the prices of competing plans through online marketplaces, including premiums, deductibles and their share of any medical expenses. The federal government also publishes more than 100 quality ratings about hospitals, as do some large private insurers. Private groups such as Consumer Reports and U.S. News & World Report also rate providers, and Internet forums such as Yelp are now littered with easily accessible opinions.

The poll from the Kaiser Family Foundation found that about two of three people say it is still difficult to know how much specific doctors or hospitals charge for medical treatments or procedures. (KHN is an independent program of the foundation.) Only about one in five people said they had seen specific cost or quality information about a hospital, insurer or doctor.

This lack of practical information may be related to another major finding from the poll: people are overconfident about their ability to pay medical bills without financial strain.

A majority of people told pollsters they had enough insurance coverage or money to pay for their usual medical costs or for an unplanned hospitalization. A majority also said paying insurance premiums, deductibles and their share of medical costs was relatively easy.

However, when asked how they would handle an unanticipated $500 medical bill, only 47 percent of insured adults under 65 said they would pay the bill in full immediately. The others said they would put it on a credit card and pay it out over time, borrow money or not be able to pay the bill at all. Not surprisingly, those bills would be a bigger problem for those who lacked insurance. 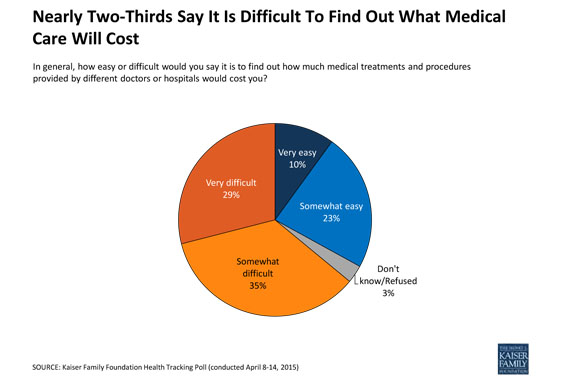