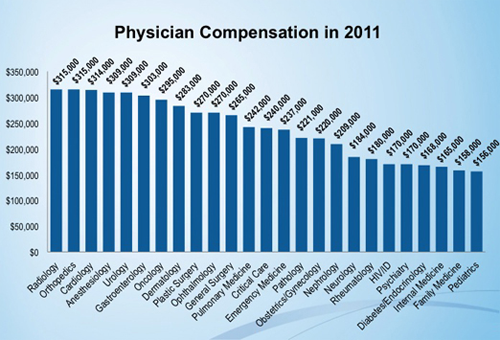 Few doctors think of themselves as rich, and only about half think they’re fairly compensated, according to survey results released this week by Medscape.

The annual survey isn’t scientific — and perhaps, not surprising, either — but it offers insights into what nearly 25,000 physicians earn, and how they view that number. In 2011, compensation self-reported by surveyed physicians ranged from an average of $156,000 for pediatricians to $315,000 for radiologists and orthopedic surgeons.

Only about 11 percent of doctors consider themselves rich, mostly because of their debts and expenses, according to Medscape.

The survey also offers a glimpse at how physicians view coming changes to the health care system, such as efforts to improve quality or offer care through accountable care organizations, which are integrated systems included in the federal health law.

More than half said they expect their incomes to decline because of ACOs (although very few were participating in such a system), and only 25 percent said quality measures and treatment guidelines will improve patient care.

Others groups that survey physicians about their income include the Medical Group Management Association and Merritt Hawkins. A 2011 MGMA report, for instance, which looked at data from 2010, found the median compensation for radiologists was $471,253 and $192,148 for physicians in pediatric/adolescent medicine.