VISALIA, Calif. — In the farming town of Exeter, deep in California’s Central Valley, Anne Roberson walks a quarter mile down the road each day to her mailbox. Her walk and housekeeping chores are the 68-year-old’s only exercise, and her weight has remained stubbornly over 200 pounds for some time now.

“You get to a certain point in your life and you say, ‘What’s the use?’”

For older adults, being mildly overweight causes little harm, physicians say. But too much weight is especially hazardous for an aging body: Obesity increases inflammation, exacerbates bone and muscle loss and significantly raises the risk of heart disease, stroke, and diabetes. 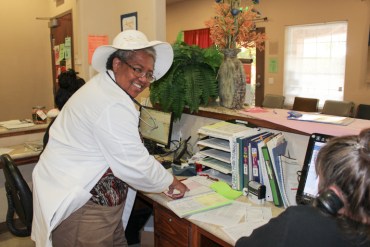 Dr. Mylene Middleton Rucker, a primary care physician in Visalia, Calif., is using the new obesity counseling benefit with her patients, but many doctors aren’t aware of it yet. (Sarah Varney/KHN)

To help the 13 million obese seniors in the U.S., the Affordable Care Act included a new Medicare benefit offering face-to-face weight-loss counseling in primary care doctors’ offices. Doctors are paid to provide the service, which is free to obese patients , with no co-pay. But only 50,000 seniors participated in 2013, the latest year for which data is available.

“We think it’s the perfect storm of several factors,” says Dr. Scott Kahan, an obesity medicine specialist at George Washington University. Kahan says obese patients and doctors aren’t aware of the benefit, and doctors who want to intervene are often reluctant to do so. It’s a touchy subject to bring up, and some hold outmoded beliefs about weight problems and the elderly.

“It used to be thought that older patients don’t respond to treatment for obesity as well as younger patients,” Kahan says. “People assume that they couldn’t exercise as much or for whatever reason they couldn’t stick to diets as well. But we’ve disproven that.”

Indeed, one study found two out of three older patients lost 5 percent or more of their initial weight and kept it off for two years.

Weight loss specialists place the blame for poor awareness of the new benefit on the federal government’s decision to limit counseling to primary care offices.

“The problem with using only primary care providers,” says Bonnie Modugno, a registered dietician in Santa Monica, California, “is that they completely ruled out direct reimbursement for the population of providers who are uniquely qualified and experienced working with weight management. I think that was a big mistake.” She was referring to registered dieticians like herself, as well as specialists such as endocrinologists, who might be managing a person’s diabetes, and cardiologists, who monitor patients with heart disease. Both conditions can be caused by or made worse by excess weight.

The drafters of the health law deliberately wrote the benefit narrowly out of concerns about widespread fraud, if charlatans were able to bill Medicare for obesity counseling. Modugno says she is sympathetic to that concern, but it is too restrictive as enacted.

“Unless we change the nature of how…the counseling occurs, I don’t see it being available to people in a meaningful way,” said Modugno.

As for Anne Roberson, she says the extra weight she has long carried on her petite frame has begun taking a toll on her joints, her sleep and her mood. On a recent morning, Roberson listened politely to her longtime physician, Dr. Mylene Middleton Rucker, during her first Medicare weight-loss counseling session. Rucker suggested she eat more vegetables and less meat and encouraged her to join an exercise class.

Rucker, who is obese herself, says she doesn’t expect her older patients to lose a lot of weight. “I think you’ll see weight loss of 10 to 20 pounds, but whether you’re going to see people lose 50 to 100 pounds as they’re older, I doubt it.”. Still, Rucker says, even with small amounts of weight loss in her older patients, she expects to see a decrease in the complications of chronic medical diseases, including diabetes-related leg amputations.

Roberson says she has tried to lose weight before, but “you hit a couple of rough weeks and you kinda slough off.” This time, Roberson says firmly, she will have to come back and answer to Rucker.