Even as end-of-life planning gains favor with more Americans, African-Americans, research shows, remain very skeptical of options like hospice and advance directives. The result can mean more aggressive, painful care at the end of life that prolongs suffering.

Kaiser Health News correspondent Sarah Varney, working in collaboration with PBS NewsHour, examines why this disparity exists and what is being done to change it.

This is a transcript of the story.

SARAH VARNEY, Kaiser Health News: Dr. Maisha Robinson, a neurologist at the University of California, Los Angeles, is on a mission to change how black seniors die in America.

Dr. Robinson grew up a pastor’s daughter in Tennessee. Now she’s working with pastors like Bishop Gwendolyn Stone in Los Angeles to urge black families to plan for the end of their lives. 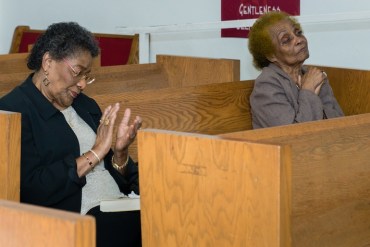 DR. MAISHA ROBINSON, University of California, Los Angeles: If you look kind of in the Bible, all the people, of course, that Jesus healed, all died. They went on to die.

BISHOP GWENDOLYN STONE: Right. It’s an awesome idea to remind people. They know, but of course they don’t want to hear it.

BISHOP GWENDOLYN STONE (at the pulpit): It’s not fun thinking about death.

SARAH VARNEY: African-Americans are more deeply religious than other racial or ethnic groups. Three out of four pray daily and more than half attend weekly church services. In many black churches, the belief is that only God, not a doctor or a patient, decides when a life ends.

BISHOP GWENDOLYN STONE: I believe that he’s got a home for me on high for me that’s not made with human hands.

SARAH VARNEY: But Stone says there’s a basis in Scripture for planning ahead.

BISHOP GWENDOLYN STONE: And just like Jesus prepared his disciples for his death, we ought to be preparing our disciples for our death. Amen?

SARAH VARNEY: There is an ideal image of a good death in America, a clearly worded legal directive reflecting a patient’s wishes, avoiding painful and unnecessary medical treatments. But that ideal image is often at odds with the realities of black spiritual life and the lessons African-Americans carry forward from their painful history.

As late as the mid-1960s, segregated hospitals were common, and legal, throughout the United States. Even in so-called mixed race hospitals, black patients were often housed on separate floors. The notorious Tuskegee syphilis study, a government-led experiment on black males, lasted until 1972 and killed more than 100 men. 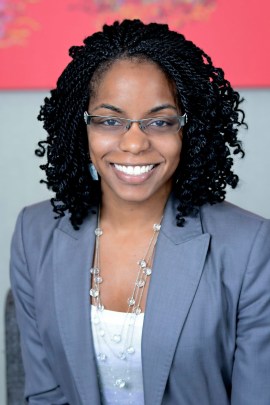 Dr. Maisha Robinson, a neurologist at the University of California, Los Angeles. She’s working with pastors in Los Angeles to urge black families to plan for the end of their lives.

Dr. Kimberly Johnson is a geriatrician and associate professor of medicine at Duke University. She says, for African-Americans, the history of abuse is not a cultural artifact. The toxic distrust of the health care system is still deeply felt today.

DR. KIMBERLY JOHNSON, Duke University School of Medicine: They receive care in facilities that were largely either segregated or facilities where they — they or their parents or their grandparents wouldn’t have been allowed to have received care. And, as a result, they are really suspicious of the kind of care they receive.

SARAH VARNEY: Dr. Johnson says black patients and their families then are understandably skeptical when a physician suggests withdrawing medical treatment or stating their wishes in advance.

Researchers have found about 8 percent of African-Americans, compared to 43 percent of whites, have an advance directive or living will. And, regardless of income, black patients are more likely than whites and Latinos to forgo hospice and say they want to be kept alive on life support, even when there’s little chance of survival.

Hospice has been much more successful reaching white middle-class patients. But here in Buffalo, New York, an influential group of African-American pastors and their wives are confronting the skepticism and fears about hospice in the black community through personal stories and prayer. 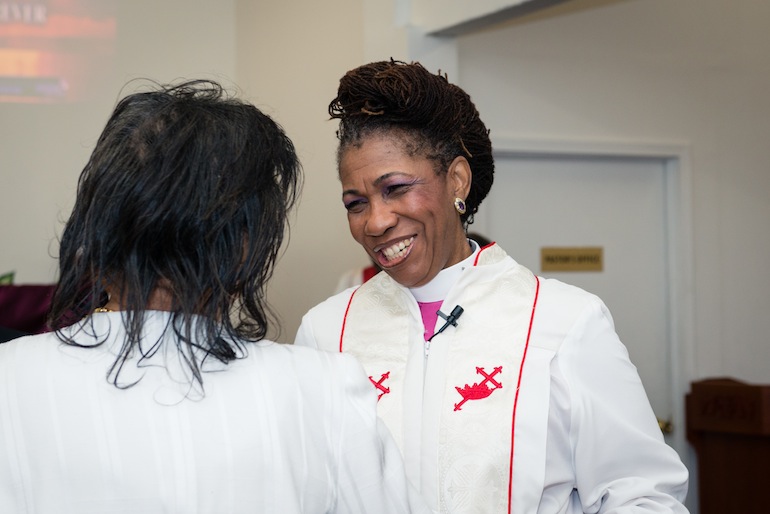 Bishop Gwendolyn Stone with a church member at the God Answers Prayer Ministries of Los Angeles on May 3, 2015 (Photo by Heidi de Marco/Kaiser Health News).

Narseary Harris and her husband, Pastor Vernal Harris lead the Prince of Peace Temple Church of God in Christ in Buffalo. Two of the Harrises’ three sons, Paul and Solomon, died from sickle cell disease, an incurable condition that causes the red blood cells to break down. Paul endured a painful and prolonged death at age 26.

REV. VERNAL HARRIS: In the African-American community, to put your loved one in a place like hospice, it was something that you never even thought of. It didn’t matter how ill your — the person was. We believe that, if they were, alive, it was our responsibility to take care of them until they passed.

NARSEARY HARRIS: He said, Mrs. Harris, Solomon doesn’t have a lot more time. And I really want to recommend hospice care for you. I said, we don’t want hospice. He said, Mrs. Harris, you don’t have to make a decision right now, but let me just introduce you to Hospice Buffalo. And I said, OK, well, we can — we will do that. I said, Solomon, you OK with that?  And he said, OK.

He wanted to be cremated, and this is actually his urn.

NARSEARY HARRIS: They talked to Solomon. They explained what they were going to do, and Solomon said, OK, so when do I have to go?  And they said, you’re not going anywhere. 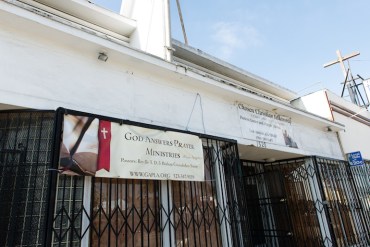 NARSEARY HARRIS: We’re coming to you.

That’s him at school.

SARAH VARNEY: Looking at family pictures, the Harrises recalled how both sons had convulsed with pain, a problem that Solomon’s hospice nurses addressed. One son’s death wholly redirected the passing of another.

NARSEARY HARRIS: To see Paul go through that kind of pain, and Solomon going from days of that kind of excruciating agony to being able to sleep, literally go to sleep and not see him, you know, go through that, that was the — I can’t even tell you.

SARAH VARNEY: At the Harrises’ church, word spread quickly that Solomon was dying, peacefully, at home.

NARSEARY HARRIS: I said, you guys got to come over and see this for yourself.

NARSEARY HARRIS: My sister’s thoughts about hospice changed, my mother’s, the members of our church.

SARAH VARNEY: Narseary Harris has been sharing her story with the wives of black pastors across Western New York and urging them to help reshape the community’s views about hospice. 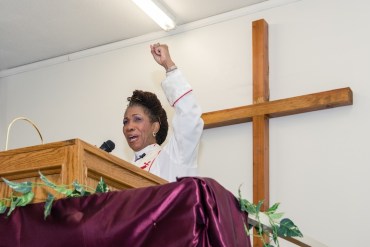 But, back in Los Angeles, at a gathering of black seniors, the challenge Dr. Maisha Robinson faces in changing minds is unmistakably on display.

LORETTA JAMES: I want them to do whatever they can. That means they can resuscitate me, to hook me up to a breathing machine, to take and put I.V.s in me, and keep me hydrated. Do not starve me to death, like they did my mother.

SARAH VARNEY: Robinson says doctors have to better explain their motivations when it comes to end-of-life decisions.

DR. MAISHA ROBINSON: It’s the intention that is unclear, many times, in the minds of African-Americans. I think we just have to be much clearer about why we’re trying to have those conversations, or we will continue to see a pattern of people who really want life-sustaining interventions even when there’s limited potential benefit.

SARAH VARNEY: Changing those beliefs seems a daunting challenge, especially when startling racial health disparities remain. But, for pastors like Gwendolyn Stone, easing the pain of death is a worthy calling.

A Matter Of Faith And Trust: Why African-Americans Don’t Use Hospice