With the support of a lone Republican, the Senate Finance Committee today approved a $829 billion health care package that would assure that most Americans would have access to health insurance, end discriminatory insurance industry practices and impose a tax on high-cost, or “Cadillac,” employer-based health care plans.

Health On The Hill with Mary Agnes Carey and Eric Pianin

The bill was approved along near party lines, 14 to 9, with only Republican Olympia Snowe, R-Maine, voting with the Democrats. Democrats have been attempting to woo Snowe for months in hopes of giving their legislation at least the semblance of bipartisanship.

“So is this bill all that I want? Far from it,” Snowe said in anticipation of the roll call vote. But she said the consequences of inaction – to the health care industry and uninsured Americans – were too grave, and that she wanted to keep the legislative process moving ahead while Senate and House leaders seek an acceptable compromise. “There are many, many miles to go in this legislative journey,” she said.

Snowe said she remains concerned about affordability of coverage under the proposal — a sentiment shared by several committee Democrats.

Baucus said after the vote that the Senate leadership will now try to craft a compromise bill that can attract 60 votes on the Senate floor — the supermajority needed to break a GOP filibuster — and will not rely on a parliamentary maneuver known as budget reconciliation to push the bill through with a simple majority.

Baucus told Kaiser Health News that he was greatly encouraged by the Finance Committee vote, with all the Democrats holding together and Snowe joining in supporting the bill, and he now believes that a compromise package can pass on the Senate floor.

An aide to House Majority Leader Harry Reid, D-Nev., said later that “I’m not sure [reconciliation] has been taken off the table, but the only thing we are focused on is getting a bipartisan bill out of the Senate.” Democratic leaders and the White House began discussing the use of budget reconcilation this summer, when it appeared highly unlikely they could amass 60 votes to pass health care reform.

Sen. Charles Grassley, the committee’s ranking Republican and a longtime Baucus ally, began moving away from the bill in August under pressure from Senate GOP leaders and conservative voters back home. He voted against the measure this afternoon.

“This is our opportunity to make history,” said Finance Committee Chairman Max Baucus, D-Mont., at the beginning of the session. “Our actions here will determine whether we extend better health care to more Americans.”

Republicans charged that the bill has veered dangerously from a more centrist approach previously discussed and that it violates President Obama’s pledge not to raise taxes on families earning below $250,000 a year or to force Americans to give up their current insurance coverage if the like it. They also contend the bill advances Democrats’ efforts to move towards a government-controlled health care industry

“It’s clear this bill is already moving on a slippery slope to more and more” government control, said Grassley.

The legislation, the product of months of bipartisan negotiations led by Baucus, D-Mont., represents the package that most closely reflects the approach outlined by President Barack Obama — one that would cost below $900 billions, that doesn’t add to the deficit and that would increase the number of legal residents with insurance coverage, in this case from the current 83 percent to about 94 percent.

The measure would reduce spending on Medicare, Medicaid and chlidrens’ insurance by $409 billion over ten years. 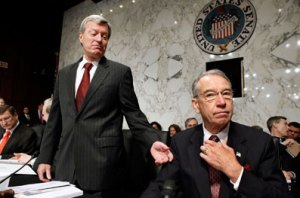 According to the Congressional Budget Office, it will reduce the budget deficit by $81 billion over ten years. Roughly 25 million people would purchase coverage through new insurance exchanges and cooperatives, and there would be roughly 11 million more enrolles in Medicaid than is projected under current law. The bill would subsidize the purchase of health insurance for families and individuals with incomes between 133 percent and 400 percent of the federal poverty level.

But the legislation doesn’t include a public insurance option for competing with private insurance companies, an approach favored by House Speaker Nancy Pelosi, D-Calif., and many liberal Democrats in both the House and the Senate. With few if any Republicans likely to support major health care legislation this year, Senate Democratic leaders have already begun closed door negotiations for reconciling the Finance Committee proposal with another previously approved by the Senate Health, Education, Labor and Pensions Committee that includes a form of the public option.

Democrats and Republicans clashed over a newly released insurance-industry study asserting that, under the Finance Committee bill, insurance premiums could rise faster and higher than projected. Republicans said the PricewaterhouseCoopers study confirmed their suspicions of the bill while Democrats insisted it was a flawed study that ignored many of the bill’s provisions that would control premiums.

As the action now shifts to the Senate floor and House chamber, there are still many disagreements to be worked out — including the ultimate price tag for the legislation, the extent of coverage and subsidies, whether to include a public option and how to pay for the legislation.

Senate advocates of the tax on high-cost insurance plans say it is essential to tamp down medical spending and to help pay for the legislation. That tax is projected to generate more than $200 billion over 10 years, or nearly a quarter of the $829 billion bill. But opponents among House members and labor groups complain that the tax would inevitably hit middle class workers. At least 173 House Democrats, two-thirds of the party caucus, have signed a letter to Pelosi voicing oppostion to the insurance tax.