If you’re looking for evidence that healthcare.gov, the federal health insurance marketplace, is working much better these days, you might want to ask Arlene Wilson. 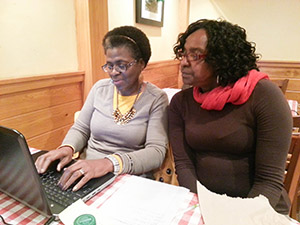 The 56-year-old is a chef with a popular pizza shop in Jackson, Mississippi.

Wilson says that “most jobs don’t offer” health insurance. Because “most of us live paycheck to paycheck,” she says she’s been unable to afford insurance for the past eight years.

But the health law was designed to help people like Wilson and her co-workers.

Aided by insurance navigator Gloria Shields, Wilson ventured through the online enrollment process.  It took two hours, but: “I got the premium plan. Which pays up to 90 percent [of medical costs].”

Just as important, she received a subsidy – a tax credit of $711 per month. “So the only thing I have to pay a month is 71 cents. Less than a dollar,” she says.

Wilson’s plan is so inexpensive because she makes less than 17-thousand dollars a year and the premiums are reduced by federal subsidies tied to her income.

About 275-thousand uninsured Mississippians are eligible for the health insurance exchange and, like Wilson, they are slowly signing up for new plans.

But only two insurance companies are offering plans in the state and they only overlap in four of the state’s 82 counties. About 20 percent of Mississippians only have the choice of one company’s plans.

One of the companies, Humana, launched a late-December ad campaign to drive more people to the site according to spokesman Mitch Lubitz.

“There has been a ramp up as the healthcare.gov has gotten easier to use and there have been other options for people to go on and get information and enroll.” Lubitz says.

Mississippi’s Insurance commissioner Mike Chaney acknowledges the improvements in the enrollment process but is still skeptical that enough people will sign up for rates to be stable.

“From a zero to ten I would give it a confidence level of about a three. That is still not very good, but it is better than the one I was at the week before last,” he says.

Chaney says the unofficial count is around two-thousand people enrolled as of the middle of December but he says if trends continue to improve his confidence will rise to a five.

This story is part of a collaboration that includes Mississippi Public Broadcasting, NPR and KHN.