For months, Sovereign Valentine had been feeling progressively run-down. The 50-year-old personal trainer, who goes by “Sov,” tried changing his workout and diet to no avail.

Finally, one Sunday, he drove himself to the hospital in the small town of Plains, Mont., where his wife, Jessica, happened to be the physician on call. “I couldn’t stop throwing up. I was just toxic.”

It turned out he was in kidney failure and needed dialysis immediately.

“I was in shock, but I was so weak that I couldn’t even worry,” he said. “I just turned it over to God.”

He was admitted to a nearby hospital that was equipped to stabilize his condition and to get his first dialysis session. A social worker there arranged for him to follow up with outpatient dialysis, three times a week. She told them Sov had two options, both about 70 miles from his home. They chose a Fresenius Kidney Care clinic in Missoula.

A few days after the treatments began, an insurance case manager called the Valentines warning them that since Fresenius was out-of-network, they could be required to pay whatever the insurer didn’t cover. The manager added that there were no in-network dialysis clinics in Montana, according to Jessica’s handwritten notes from the conversation. (The insurance company disputes this, saying that its case manager told Jessica there were no in-network dialysis clinics in Missoula.)

Jessica repeatedly asked both the dialysis clinic staff and the insurer how much they could expect to be charged, but couldn’t get an answer. 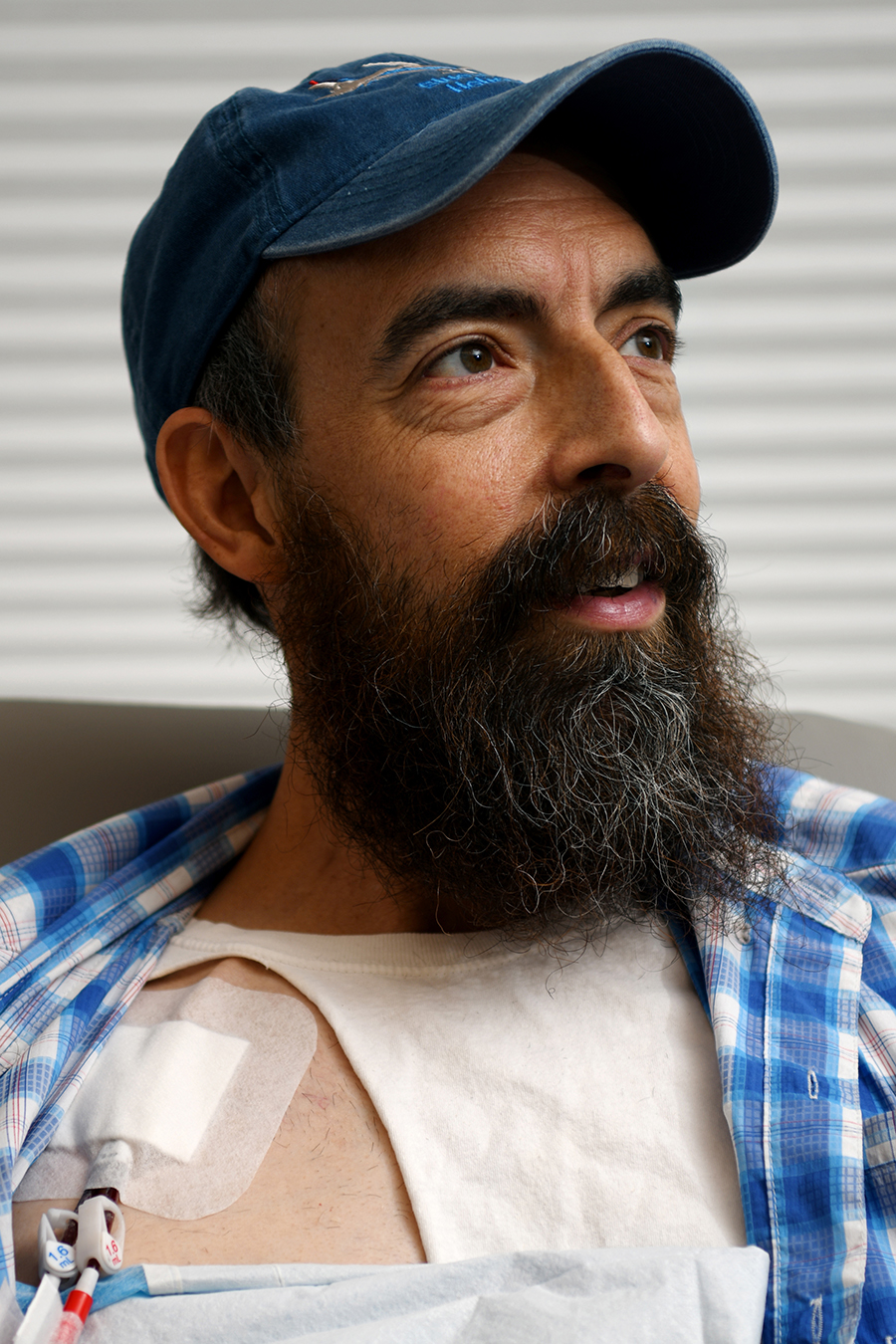 Valentine, a personal trainer in Plains, Mont., needs dialysis for his end-stage renal disease. When he first started dialysis treatments, Fresenius Kidney Care clinic in Missoula charged $13,867.74 per session, or about 59 times the $235 Medicare pays for a dialysis session.(Tommy Martino for KHN)

Patient: Sovereign Valentine, 50, a personal trainer in Plains, Mont. He is insured by Allegiance, through his wife’s work as a doctor in a rural hospital.

Service Provider: Fresenius Medical Care, one of two companies (along with rival DaVita) that control about 70% of the U.S. dialysis market.

What Gives: As the dominant providers of dialysis care in the U.S., Fresenius and DaVita together form what health economists call a “duopoly.” They can demand extraordinary prices for the lifesaving treatment they dispense — especially when they are not in a patient’s network. A 1973 law allows all patients with end-stage renal disease like Sov to join Medicare, even if they’re younger than 65 — but only after a 90-day waiting period. During that time, patients are extremely vulnerable, medically and financially.

When Jessica opened the first bill, she cried. “It was far worse than what I had imagined would be the worst-case scenario,” she said.

Sov had a different reaction: “To me, it’s so outrageous that I just have to laugh.”

Dialysis centers justify high charges to commercially insured patients because they say they make little or no money on the rates paid for their Medicare patients, who — under the 1973 rule — make up the bulk of their clientele. But nearly $14,000 per session is extraordinary. Commercial payers usually pay about four times the Medicare rate, according to a recent study.

Dialysis companies are quite profitable. Fresenius reported more than $2 billion in profits in 2018, with the vast majority of its revenue coming from North America. The discrepancy in payments between Medicare and commercial payers gives dialysis centers an incentive to treat as many privately insured patients as possible and to charge as much as they can before dialysis patients enroll in Medicare. It may also give dialysis centers an incentive to charge the few out-of-network patients they see outlandish prices.

“The dialysis companies may think they can get closer to what they want from the health plans by staying out-of-network and charging these prices that are totally untethered to their actual costs,” said Sabrina Corlette, a professor at Georgetown University’s Health Policy Institute. “They have the health plans over a barrel.”

One potential way to save costs on dialysis is to switch to a type that can be done at home, which involves infusing fluid into the abdomen. Called peritoneal dialysis, it is common in Europe but relatively rare in the U.S. In an executive order this month, President Donald Trump announced new incentives to increase uptake of those options.

Brad Puffer, a spokesman for Fresenius Medical Care North America, said the company is working with the Valentines “to immediately resolve the situation.”

“This person was unfortunately a victim of a health care system where insurers are increasingly shifting the financial burden to patients,” Puffer said in a written statement Wednesday. “We are committed to doing the right thing so that our patients are not placed in the middle of these disputes.”

Resolution: As a physician, Jessica Valentine is savvy about navigating the insurance system. She knew it was important to find an in-network provider of dialysis. She and the insurance company case manager both searched on the insurer’s online provider directory, she said, and were unable to find one. The problem may have been searching for a “provider” rather than a “facility” in the directory. Jessica eventually wrote to the Montana insurance commissioner to inquire if the lack of a dialysis provider violated a requirement that insurers maintain an “adequate network” of providers.

With help from the state insurance commissioner, she learned that there was, in fact, an in-network dialysis clinic run by a nonprofit organization that had not turned up in her insurer’s online search or the directory. She immediately arranged for Sov to start getting further dialysis there. But the bills from Fresenius, meanwhile, were adding up.

After a reporter made inquiries, a financial counselor at Fresenius told Jessica that the Valentines qualified for a discount of 50%, based on their income. That would still leave them a bill of $262,400.08.

“It’s still a completely outrageous charge,” Jessica said. “I want to pay what we owe and what’s reasonable and what his care actually cost.”

Unwilling to pay Fresenius more, Allegiance said Jessica should have found the in-network facility earlier. “There is always the potential for customers to misunderstand information about how their health plan works, especially in stressful situations,” a spokesman for Allegiance wrote.

Jessica is considering contacting a lawyer. If all else fails, the Valentines will consider filing for bankruptcy. A family doctor who works at a rural hospital, Jessica now understands why some of her patients avoid testing and treatment for fear of the cost. “It’s very, very frustrating to be a patient, and it’s very disempowering to feel like you can’t make an informed choice because you can’t get the information you need.” 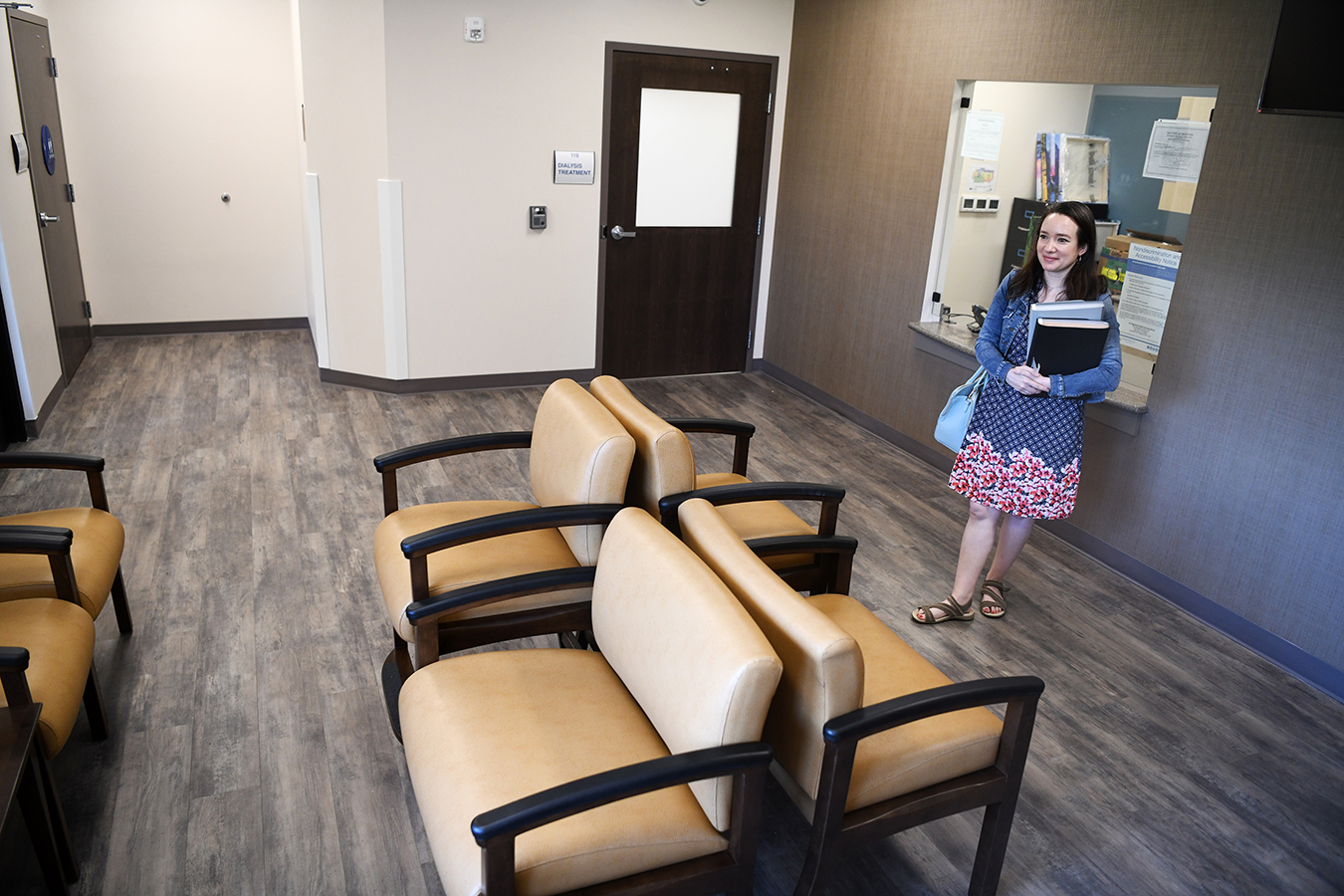 As a physician, Jessica Valentine is savvy about navigating the insurance system. She knew it was important to find an in-network provider for her husband’s dialysis. She and the insurance company case manager both searched on the insurer’s online provider directory, she said, and were unable to find one.(Tommy Martino for KHN)

The Takeaway: Dialysis is a necessary, lifesaving treatment. It is not optional — no matter a patient’s financial situation.

Insurers are obligated to have adequate networks for all covered medical services in their plans, though “adequacy” is poorly defined.

So, if it looks like there isn’t an in-network option within a reasonable distance — for dialysis or more basic services from orthopedists or dermatologists — keep digging. Keep in mind that dialysis clinics may be listed as “facilities” rather than “providers” in your directory.

If none are available, seek help from your state’s insurance commissioner. Report your experiences — that’s one way the commissioner can learn that the names listed in the directory aren’t taking patients or are 50 miles away, for example.

If you have insurance through an employer, you can contact your benefits department to go to bat for you. If there is no in-network option, you should get a dispensation to go out-of-network at in-network rates and with in-network copayments.

If you receive a bill for out-of-network care, don’t merely write the check. Ask for an itemized bill and review the charges. You can also ask your insurance company to negotiate with the provider on your behalf. See if the bill counts as a “surprise bill” under your state’s law, in which case you could be “held harmless” from excessive charges.

And when all else fails, try to negotiate directly with the provider. They might have a financial assistance policy, or be willing to lower the cost significantly to avoid turning you over to a debt collector that would pay them pennies on the dollar.