The impending “fiscal cliff” is a package of automatic spending cuts and tax hikes set to kick in next month unless President Barack Obama and Capitol Hill agree on a way to stop them. 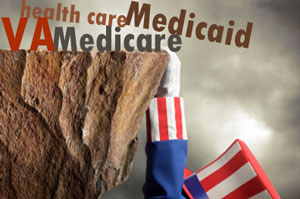 Negotiations to avert the cuts are ongoing and both sides have exchanged offers. The president and congressional Democrats have said they will reduce spending on entitlements, including Medicare, if Republicans will agree to increase tax rates on the highest earners. While Republicans have agreed to more revenue, they oppose increasing tax rates, preferring to focus on closing loopholes and eliminating some deductions.

Here are a few questions and answers about what could happen in the weeks before the end-of-year deadline.

Q: If no deal is struck, how would that affect Medicare patients as well as the hospitals and physicians and other providers who care for them?

A: Under the series of automatic spending cuts known as “sequestration,” Medicare providers would be subject to an across-the-board 2 percent payment cut, or $11 billion in fiscal 2013.  According to a September report from the Office of Management and Budget, hospitals would bear the largest share of the cuts, with payments reduced by about $5.8 billion.

Seniors would see no changes in their benefits.

A: Physicians who accept Medicare patients would face the 2 percent cut on top of an already scheduled 27 percent reduction in January unless Congress steps in to stop it.

That payment formula was created in a 1997 deficit reduction law that called for setting Medicare physician payment rates through a formula based on economic growth. It’s known as the “sustainable growth rate” (SGR).

For the first few years, Medicare expenditures did not exceed the target and doctors received modest pay increases. But in 2002, doctors reacted with fury when they came in for a 4.8 percent pay cut. Every year since, Congress has staved off the scheduled cuts. But each deferral just increased the size – and price tag – of the fix needed the next time.

A deal on the SGR could be part of a “grand bargain,” if congressional fiscal cliff negotiators decide to include it. To that point, Obama’s offer to Republicans included $25 billion to stop the scheduled cut. Congress could also pass separate legislation to stop the cuts. Some doctors say that if Medicare reimbursements are further reduced they may stop accepting Medicare patients.

Q: If negotiators do reach a deal, what could that mean for Medicare?

A: It depends on how large a role Medicare plays in a broader deal.  Some of the proposals include raising Medicare’s eligibility age to 67, asking wealthier Medicare beneficiaries to pay more for their coverage and paying Medicare providers less. All are complicated and many Democrats have said that they do not want to make changes that harm beneficiaries or shift costs from the government onto seniors.  Republicans are insisting that entitlement savings play a large role in any deficit reduction deal.

Q: How is Medicaid affected, either way?

A: Medicaid does not face any automatic cuts starting Jan. 1.  The Supreme Court’s ruling made the health law’s Medicaid expansion optional for states, so there’s concern that any reductions in federal Medicaid spending might make governors even more reluctant to expand the federal-state program.

Many Republicans, including GOP presidential nominee Mitt Romney and his running mate, Rep. Paul Ryan, R-Wis., favor changing Medicaid into a block grant, where states are given a set amount of money and more freedom to decide who is covered and what benefits they would receive. But the block grant concept is a non-starter with Obama and Democrats.

Q: If no deal is reached by Jan. 1, what happens to federal funding for medical research?

A:  The National Institutes of Health would see a $2.5 billion reduction in 2013, which means that the agency would “have to halt or curtail scientific research,” according to the OMB analysis. Other agencies would see cuts, too. For example, the Centers for Disease Control and Prevention would face cuts of $490 million, and the Food and Drug administration would see reductions of about $318 million.

Q:  If no deal is reached, what happens to health care for members of the military and veterans?

A: The TRICARE program for active members of the military system would also face an across-the-board 2 percent cut. The Veterans Affairs health system, however, is exempt from sequestration.

Alvin Tran contributed to this report.