TALLAHASSEE – The 30 or so attendees at St. Mary Primitive Baptist Church on a recent evening believed they were about to hear an official presentation by the “Obamacare Enrollment Team” on all of their options to get insurance because of the Affordable Care Act.

They were told: “If anybody is interested in getting enrolled we can get you enrolled tonight.”

Signs outside the church even looked official:  A familiar large “O” with a blue outline, white center and three red stripes. 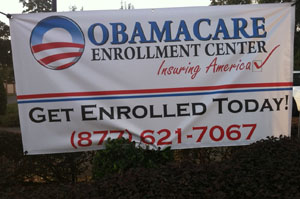 This Obamacare Enrollment Center is not connected to the federal health insurance exchange (Photo by Lynn Hatter/WFSU).

Copeland claims that, “I’m a registered lobbyist with the Senate and House, so I don’t have to have a navigator license. I have my credentials from the U.S. Senate and House of Representatives.”

But she does have to be licensed.  Real navigators and certified application counselors have received federal approval to assist people in signing up for insurance through healthcare.gov, the federal website where people are supposed to be able to browse all the plans available, figure out what subsidies they might qualify for (or if they qualify for Medicaid), and apply for coverage with a private insurer.

The Obamacare Enrollment Team didn’t mention healthcare.gov during their presentation at St. Mary. Instead, they offered a narrower choice of plans than consumers can find on the federal site. And, they told seniors in the audience they could sign up for insurance, when in reality they qualify for Medicare.

In fact, Copeland and Holmes work for health insurance agencies and agents, specifically the Fiorella Insurance Agency in Stuart, Florida.

The agency’s vice president Nick Fiorella runs the “Obamacare Enrollment Teams” in various states, “specifically,” he said, “in urban communities where we feel there is a lot of misinformation and education that needs to be done in order to inform individuals of their health insurance options in regard to health care reform.” 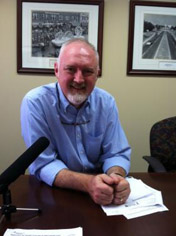 Pastor Holmes reluctantly acknowledged after questioning  that they’re not working directly with healthcare.gov, that he’s “marketing” for specific insurers, including Florida Blue and Humana.

Fiorella insurance agents are licensed and authorized to sell insurance to consumers.

Florida Blue officials did not return a request for comment, and Humana officials declined to be interviewed. However, in a statement, company spokesman Mitch Lubitz confirmed Humana does business with Fiorella’s agency, but that Humana, “does not endorse nor participate in Fiorella’s health reform or Affordable Care Act seminars.”

Other insurance agents trying to navigate the new health insurance market see the Obamacare Enrollment Teams as giving their industry a bad rap.

Bart Gunter, vice president of the Rogers, Gunter, Vaughn Insurance company in Tallahassee says, “Transparency has to be at the forefront because … there’s a void of education. And so, people are vulnerable. When people don’t know, the darker side kinda comes in and takes advantage of that.”

When asked about the similarity of the “Teams” materials to the Obama campaign logo, Fiorella said: “Whenever we’re made aware of materials that are not approved, we make our best efforts to get those materials out of circulation.” As of now, the familiar symbol is gone from the Enrollment Team website.

Several attendees at the St. Mary church event, who did not want to be identified or directly quoted, said they were worried about the lack of transparency but were grateful the Obamacare Enrollment Team had come into their community — and openly questioned why the federal government’s own navigators and counselors weren’t present.

The U.S. Department of Health and Human Services didn’t comment on this story, but in a statement, a spokeswoman says allegations of fraud are taken seriously.

A complaint against the Obamacare Enrollment Team has been filed in Illinois regarding the group’s website,  but it was cleared of any wrongdoing. Consumers also have raised concerns in Michigan, where people say they were led to believe the group is affiliated with the federal government.  A complaint was also filed in Florida, and now state regulators there are looking into the group’s activities as well.

Adding To Health Insurance Confusion, Other Groups Try To Cash In