Florida insurance regulators unveiled for the first time Wednesday the prices proposed by private insurers for individual health plans to be sold on the state’s federally-run exchange, which is scheduled to launch Oct. 1.

But the proposed health plans and prices — and the state’s analysis that federal healthcare reform would cause premiums to rise — were hardly definitive of the actual costs that Floridians are likely to pay for health insurance next year. 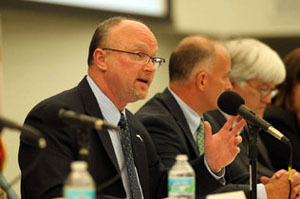 That’s because the U.S. Department of Health and Human Services has yet to approve the proposed health plans for Florida’s exchange, and those plans, including the prices, may change as they have in other states.

And while Florida insurance regulators said this week that the Affordable Care Act will cause the price of individual health plans sold in 2014 to rise 30 to 40 percent higher than similar plans sold today, and small group plan premiums could rise by 15 to 20 percent, they also conceded that those projections were based on a “hypothetical” health plan that does not exist anywhere in the state.

What’s more, the price projections released by the state do not factor in substantial government subsidies that will be available to many consumers based on household income, which will offset their actual out-of-pocket expenses.

Speaking to the Florida Health Insurance Advisory Board on Tuesday, Florida’s insurance commissioner Kevin McCarty said that the federal mandate for insurers to provide coverage to everyone regardless of pre-existing conditions was “the most profound reason” for the projected dramatic increase.

Echoing his remarks, Wences Troncoso, the state’s deputy commissioner for health and life insurance, said the fact that insurers must cover everyone regardless of pre-existing health conditions — a provision called “guarantee issue” – “will by far have the most effect on rates.”

Troncoso also attributed rate hikes to the federal requirement that insurers no longer charge women of child-bearing age higher premiums than men. Nor will they be able to charge older policy holders more than three times the price of their least expensive plan.

Comparing To Other States?

But federal officials balked at Florida’s projections late Wednesday, and said that the state’s experience should reflect what has occurred in other states.

Citing an HHS study of 11 states where insurance plans have won federal approval for sale on the government exchanges, an Obama administration official said premiums were on average almost 20 percent lower in those states than what the Congressional Budget Office had projected.

“We are confident that Florida’s premiums will be affordable, and that consumers will have multiple options in a competitive and transparent marketplace,” a senior administration official said. “When the marketplaces open Oct. 1, consumers will be able to shop for the plan that best fits their budget and needs. Without releasing the premiums, the statistics released Tuesday don’t provide consumers with any information on what they will actually pay in the marketplace.”

Yet there’s also a limit to the federal government’s power to affect health insurance pricing.

Federal officials do not have authority to approve a plan based on rates. They can only evaluate plans to determine whether they meet the standards of the Affordable Care Act, not whether the premiums are reasonable.

The disparate views of the ACA’s impact on health insurance costs reflect the political divide between federal and state officials.

Some states that have embraced healthcare reform have shown residents how the law will reduce insurance costs, while some others that have opposed the act are presenting reform as a more expensive prospect.

Under Florida law, insurance companies are required to explain to policyholders in writing how much of their premium cost increase is the result of the act’s “guarantee issue” and other mandates.

But insurers are not required to explain to policyholders one of the primary reasons that prices for health plans sold on the federally-run exchanges may run higher in Florida than in other states: Because Florida legislators this year stripped the Office of Insurance Regulation of the power to negotiate rates with insurers offering health plans on the federal exchanges until 2016.

Unlike states such as Maryland, where insurance regulators said they negotiated lower rates for health plans offered on their state’s exchange, Florida insurance officials have been relegated to simply approving plans for compliance with federal reform law.

“We’re not approving or denying rates [for individual or small group policies],” McCarty said. “We’re checking them for completeness. It’s an informational filing.”

Florida insurance officials will, however, continue to regulate rate increases for so-called grandfathered health plans, sold before the adoption of the Affordable Care Act in March 2010.

Until now, health insurance has been priced at a base rate that was adjusted for the insured’s age, gender, health status and other factors.

Premiums could be increased by a factor of 10 or more for some individuals with existing conditions, or a rider could exclude coverage for the condition.

Starting January, those rules will no longer apply. Everyone will be covered regardless of health status. Women in their childbearing years won’t pay higher premiums, and older people won’t be charged more than three times the lowest premium’s cost.

Consumers who qualify to buy a plan on the exchange also will receive federal subsidies to help offset the costs.

Individuals and families earning up to 400 percent of the poverty line — which is $45,960 for an individual and $78,120 for a family of three — will be subsidized on a sliding scale. For some, depending on annual income, premiums will be capped at a percentage of their annual income.

By Daniel Chang and Patricia Borns, The Miami Herald August 1, 2013